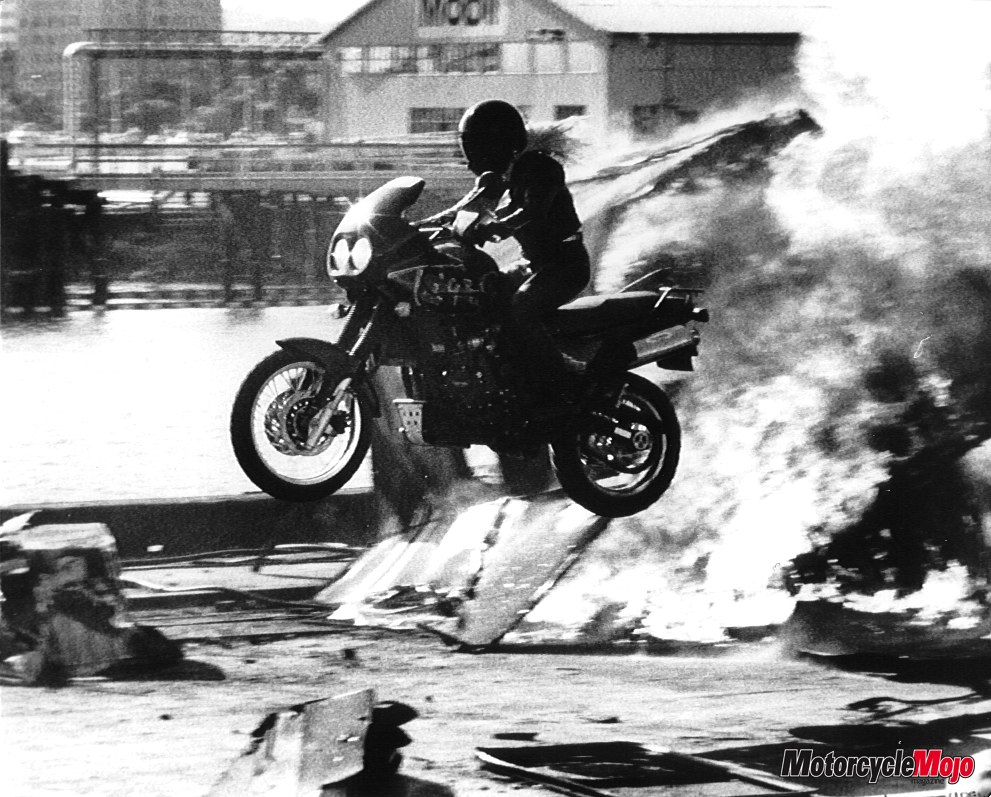 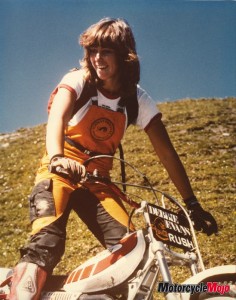 A few issues back, Clinton Smout wrote an article about stunt riding in a movie (Nov./Dec. 2006) and it got me thinking about motorcycle stunt riders. One of the most exciting motorcycle stunt scenes I remember was in the Matrix Reloaded (which starred Canadian actress Carrie Ann Moss on a Ducati). I jumped on the internet and discovered that the woman who performed that amazing sequence was Debbie Evans. I tracked her down and had the opportunity to chat with her and discover what it’s like to live the life of a stuntwoman.

Debbie Evans is considered one of Hollywood’s top stuntwomen, appearing in over 200 movies and television shows and is considered a pioneer in the industry. Her work has helped to open doors for other stuntwomen. Although she specializes in car and motorcycle stunts, she has also done many that involve falling down stairs, getting hit by cars and high falls. She has done just about every type of stunt imaginable, including setting the world distance record for an airramp jump. An airramp is the device used in a movie to propel the stunt person through the air after an explosion.

At the tender age of 6-years old, her dad took her out and showed her how to ride. At the time, people weren’t so concerned with safety and so without a helmet she remembers taking off and crashing into a pile of rubble. After making sure she was okay, her dad asked her if she was going to get back on the bike and ride. She did, and she’s been on one ever since.

When Debbie was just 15-years old, she was considered the best female trials rider and as a result, she received a factory sponsorship from Yamaha. Since there were no female competitors she rode for Yamaha in the Men’s National Trials competition.

Debbie also demonstrated her talents at exhibitions, fairs, and local races and performed in front of tens of thousands of fans at AMA Grand National and AMA Supercross events. Her signature move was being able to perfectly balance her stationary motorcycle while doing a headstand on the seat, with the kickstand up.

One day, while watching television she noticed that the stunt double for the actress was not a woman. “One look and I could tell that it was obviously a man because of his thick neck and wide shoulders.” At that moment, Debbie decided to look into stunt work. Debbie inquired, only to discover that you had to have a Screen Actors Guild card, and in order to get a card you had to be invited, unfortunately, she didn’t know anyone in the Guild.

Debbie continued riding for Yamaha and at age 19 she got a call asking if she would be interested in trying out for a movie (Death Sport) as a stunt rider. She got the job, and has never looked back.

Over the years, Debbie has had the opportunity to work with many actors; one of her favourites is Arnold Schwarzenegger. While working on the movie Kindergarten Cop, Arnold, Debbie and other stunt people would go mountain biking and horseback riding after the day’s shooting was done. Arnold was just a regular guy.

When it comes to stunt doubling an actress, Debbie pays close attention to how they move and she gets to know their personality. She will also explain to the actress how to position herself just before the stunt scene so it will look natural and all flow together to create the illusion that the actress is really doing the stunt.

In 2004, Debbie won the Taurus World Stunt Award for her work on the movie, The Matrix Reloaded. It was during this movie she worked with Carrie Ann Moss and taught her how to ride the Ducati 996. They worked closely together until Carrie Ann was confident enough to ride the Ducati with the camera vehicles following along side of her and then rode it with an actor on the back. “This was a huge achievement for a beginner on such a fast bike with a very responsive throttle.”

During the shooting of the Matrix Reloaded, Debbie wore a tight vinyl suit in order to look like the actress. If Debbie went down the suit would have shredded, so she wore spandex underneath to give her an extra layer of “skin”. She was able to file the edges off thin armour pads and fit them under the tight suit to protect her knees and elbows. As for the shiny vinyl boots she wore; like the suit, they were just for looks and offered very little protection. 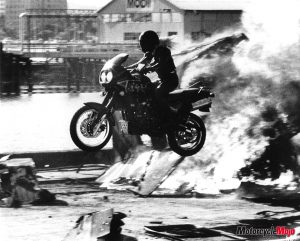 In this particular stunt they wanted her to cut her hair and dye it black. Debbie decided against this for two reasons. Her kids were little at the time and this might have been upsetting to them, and secondly by not cutting her hair she would have an extra layer of protection by putting her hair up under a wig. While it was no comparison to a helmet, it was better than nothing.

While shooting the Matrix Reloaded, Debbie did get hit by a car head-on. She had done the shot many, many times and she was up to about 50 mph. There were four lanes of traffic coming toward her and the oncoming cars were making lane changes. Debbie was performing her last move in a lane that was supposed to be clear but when she got there, a car occupied the lane. She reacted automatically and tried to split the lane. Just as she made her move, the car turned into her doing 20 – 25 mph with a combined impact of about 75 mph. The car received a huge crease in the front fender and Debbie was taken away to the hospital. Amazingly, she had only injured her foot and leg but nothing was broken. She went back to her hotel room, took the trashcan, filled it up with ice water and stuck her foot into it many times throughout the night. In the morning she was back on the set doing her stunts.

In the Matrix Reloaded, 12 Ducati motorcycles were used on the set and they held up very well. They jumped and were landed hard several times, but each time they would be checked for stress cracks. Although there was no extra padding in the seat, Debbie said the landing was not so bad because she and her passenger knew how to use their legs and the suspension when landing a jump. Debbie told me that “you are not just sitting hard on the bike when you land, you are actually standing up on the pegs and as you hit you absorb the impact with your legs and then you go down to the seat.” Debbie made sure that the passenger on her bike was a guy who rode motocross because he would then have some ‘air sense’ and would know what to do and know where his weight should be.

The directors of the Matrix Reloaded were so pleased with Debbie’s work that when the movie was completed they presented her with a Ducati 996 to take home. Debbie was thrilled.

In Debbie’s opinion, most of the best stunt riders come from a dirt bike background because they understand momentum, suspension, and the different traction on various road surfaces. Dirt riders understand how it all works and are not afraid of the motorcycle getting sideways. “There is a natural feel of what to do and how to bring it back. There is something we say ‘you have to have a seat’, the same expression is used in horseback riding. The people who ‘have a seat’ in horseback riding are not bouncing around, they have a natural feel for what the horse is going to do underneath them. The same thing applies in motorcycle riding”, Debbie explained.

Sometimes there are limits to what is possible even for a stunt person. Debbie finds the hard thing about motorcycle work is that a lot of directors don’t ride so they don’t understand what can and can’t be done. “Sometimes I’m told that a scene is ‘just a ride out, nothing big’. Then I get there and I find they’ve got me pointing toward a building that’s three feet from the front wheel, and they want me to do a donut on a Fatboy, bring it around and ride it out.” That’s when she says “Guys…. that’s not going to work.” There’s generally room for Debbie’s input to make the dangerous stunts safe yet entertaining.

When Debbie is not working on a movie, she enjoys riding the many bikes that her family owns ranging from 100 cc to 500 cc as well as her 996 and her Triumph Bonneville. Debbie’s house is situated on a twisty road with tight turns, perfect for her Ducati. She said she loves the way it looks and the way it handles. But if she is in the mood for a nice cruise she will choose the Bonneville every time.

Motorcycles have taught Debbie a great deal about life in general. From the time she was six, her father had taught her how to use tools and how to fix things like throttle cables, change out parts and how to clean her bike. Over the years, these have been necessary skills for Debbie. “Being able to do repairs on my bike and not having to rely on someone else to fix it makes you a self-sufficient person” said Debbie. Debbie explained, “While driving through the desert you sometimes find yourself riding alone and if something breaks, you have to come up with a way to fix it. Being self-sufficient forces you to surpass your personal limitations. It teaches you, that just because you are a little tired, or you’re sore, or you fell down and hurt yourself a little bit, that you can go past those limits.”

In the 2004 movie, Torque, Debbie rode a Suzuki Bandit. She described some of the stunts that were done in this movie. “Standing on the seat and standing on the tank, crossovers where you sit on the tank and put your legs over the handle bars, skitching where you get off the back of the bike and your feet are dragging, burnouts, rolling burnouts and 360’s while you are burning out. “I didn’t know how to do these stunts before this movie and if someone had asked the question, ‘Can a Mother of three in her 40’s learn to do all these new tricks for a movie?, the response would most likely have been, ‘Not a chance’.” Not letting this hold her back, Debbie watched other riders perform these stunts and asked them questions. Within three days she was able to do all of the stunts required for the movie.

Debbie offers this advice, “Don’t put limits on yourself or let the expectations of others get in the way of what you are capable of doing.” Debbie lives by this advice and even after appearing in hundreds of motion pictures, television shows and commercials, she has no intention of slowing down any time soon.

Oh… by the way Clinton, I gave Debbie your phone number. If she is ever up this way working on a movie, maybe she’ll give you a call for some back up.