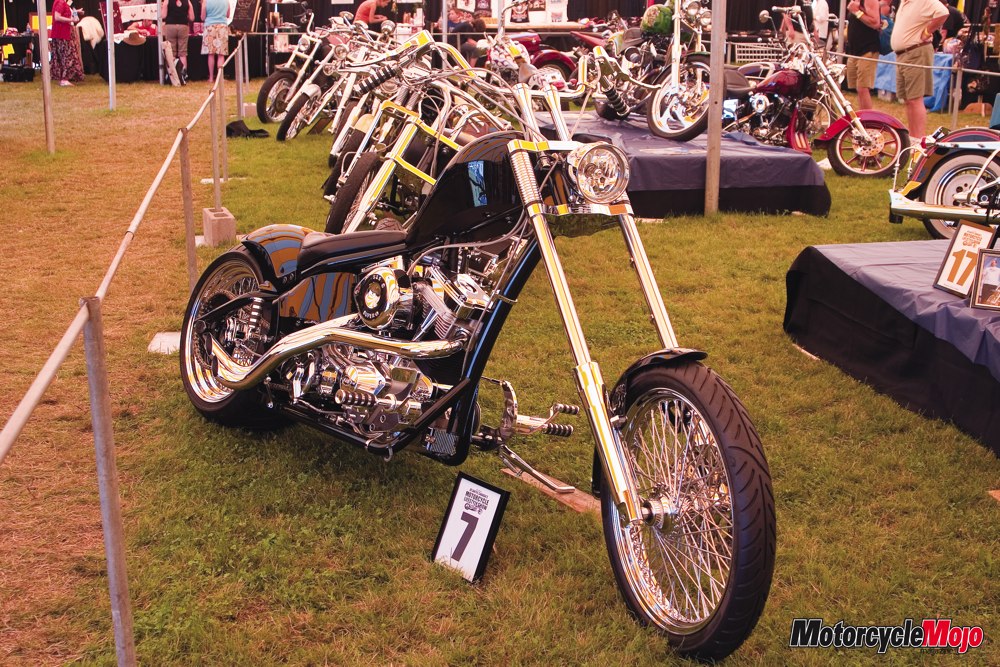 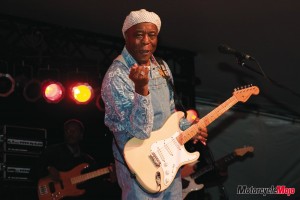 What do you get when you mix motorcycles, bikers, friendly townfolks, local as well as internationally acclaimed blues musicians, a BBQ competition, perfect weather, and a town and a venue that opens it arms and doors to the whole shebang? Easy answer. You get one of the best weekends of the summer and a place worthy of riding to for a weekend or a destination for your summer holidays. I can’t think of a better way to spend a few days of quality time looking at some of the best bikes the East Coast has to offer, all while bending your ears to some of the best blues the East Coast, and the world for that matter, has to offer.

The show is the brainchild of David DeWolfe, a long time friend of Dutch Mason, who was fondly known as the “Prime Minister of the Blues”. In previous years, the show was held at the Dartmouth waterfront and while that venue had beautiful scenery in the middle of the city, it became apparent it wouldn’t work there if for no other reason than the lack of room for parking. DeWolfe turned to Dutch’s hometown of Truro and, more specifically, the Nova

Scotia Provincial Exhibition grounds. DeWolfe contacted the commission chairman, Jeff Yuill, and a deal was made to hold the 2007 festival in Bible Hill; just a stones throw from Truro. A very good move for all parties concerned, including the town and the spectators. There is plenty of room to grow and plenty of parking, two things that were lacking in Dartmouth. Another benefit to this location is that it is much more central to all of the Maritime Provinces.

The stage was set at one end of the grounds and the huge bike show tent was at the other end, right beside one of the beer gardens. Inside the tent was everything from slightly modified bikes to full-blown customs. A couple of the province’s better known bike shops were in attendance, Toads Cycle Works from Dartmouth had a few bikes on display as did Bentley Bikes from Truro. Bentley Bikes is well known for their engine work and to prove that, they had a bike on display with an in-house designed and manu-factured 160 ci V-Twin. A big engine that garnered even bigger attention from the crowds. All in all, 24 entries were vying for a ‘People’s Choice’ vote in the bike show.

THE LEGEND LIVES ON 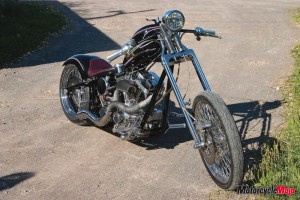 Even without the ‘Prime Minister of the Blues’ present, Dutch Mason’s name lives on in the hearts of his fans and at the Dutch Mason Blues Festival. The crowds came in droves to witness the musical talents of huge blues names like Kenny Wayne Sheppard, who has been likened to the late Stevie Ray Vaughan. While Sheppard was the headliner for Friday night, two blues legends, the amazing James Cotton and the ever-charismatic Buddy Guy took to the main stage Saturday night to a record-breaking crowd.

Nova Scotians take their music very seriously and have a rich musical heritage in all types of music. Blues music has its roots the world over and the East Coast is no exception as there are plenty of talented blues musicians in the Maritimes. Toss in a few local names like Garrett Mason (Dutch Mason’s son), Joe Murphy, Charlie A’Court, Matt Minglewood, Morgan Davis, Keith Hallett and Eileen Joyce and you’ve got a top-notch event on your hands. To put it mildly, this festival will just knock your socks off.

The Motorcycle Lifestyle Show and the Blues Festival began Friday evening at 7:00 p.m. with Garrett Mason on stage, upholding the family tradition of being an outstanding blues man like his father. Canada’s own Sue Foley performed prior to Kenny Wayne Sheppard who split a few eardrums when he wailed away on his guitar until 1:00 a.m.

Just because the last performer has left the stage doesn’t necessarily mean the evening is over though. It just means it’s time to move into the beer garden and listen to more live music until it closes. We didn’t stay till the end on Friday night but I heard from a number of very reliable sources that the music finally stopped at 4:00 a.m., which I understand is typical of a Nova Scotia party?

Saturday, the venue opened at 11:00 a.m. and the music began shortly after at 1:00 with local bands playing until James Cotton’s band took to the stage at around 9:30 that evening. While James ‘Super Harp’ Cotton (72 years old) played his harmonica in fine form, his vocalist and lead guitarist, Slam Allen, stole the show with his blistering guitar and showmanship on stage. Following Cotton’s performance was Buddy Guy. It was evident that Guy’s 71-years hasn’t slowed him down much as he is still quite nimble and very active on stage. Both acts were amazing, but when Buddy Guy left the stage unexpectedly and showed up singing and playing blues licks on his guitar in the audience, the crowd went crazy. There was a moment during his performance that became the highlight of the night, and it couldn’t have been planned better. After a few songs, he was getting into a soulful guitar riff just as a train rolled through town blowing its whistle. Buddy Guy, being the professional that he is, didn’t skip a beat as he began to grin and said softly into the microphone, “Right on time”. Guy stepped his guitar playing up a notch and just as the master musician gave his fingers a break, the train whistle blew again. “Right on time again, that’s why I don’t rehearse.” Guy said to the cheering crowd.

On the recommendations and rave reviews of Friday night’s beer tent performances, we stayed for Saturday night and were not disappointed. The music was amazing as the small stage at the end of the beer tent was packed with performers including The Dutch Mason Band. One of the performers, local blues man Joe Murphy, wasn’t going to miss the concert weekend. He had been in the hospital recovering from a heart attack but checked himself out, much to the protest of his wife, just so he could play at this festival named after his mentor and good friend. Although the beer garden jam session didn’t run as late as Friday night, we stayed listening to music until they finally kicked us out at around 3:00 a.m. I love the East Coast, it’s a slower way of life, so laid back and friendly.

Sunday was the Dutch Mason Tribute. Although local performers played all weekend, this was the day for them to get together to remember the man who put Canadian blues on the world map. Garrett Mason once again opened the day and set the stage for the calibre of music the crowd would hear for the next few hours. Six o’clock would be the finalé of the weekend with a full stage of performers jamming as a tribute to the festivals namesake.

The Blues Festival and Motorcycle Show was a huge success this year with more than 14,000 people entering the gates during the weekend. There are plans underway to increase the space and the number of tents for next year’s bike show and although performers have not been confirmed yet, DeWolfe said he has been in touch with some very big names for the upcoming year. Next years Dutch Mason Blues Festival and Motorcycle Lifestyle Show promises to be bigger and better. Many businesses have jumped on board to be part of the very successful weekend including the province wanting to help with some promotion of the event.

Congratulations to Vinnie Melvin of Cruisers Custom Cycles from St. John, New Brunswick for winning the ‘People’s Choice’ award for his custom “Scrap Iron”. See more of Vinnie’s bike in the centre spread of this issue.

While the motorcycle show is a significant part of the weekend, as is the BBQ competition, the event is a blues festival first and foremost and the calibre of talent on the stage during the weekend leaves no question of that. Next August 8-10, be sure to make plans to spend some time in a part of the country that has the friendliest people in the world, view some awesome bikes, talk to a few vendors and listen to some of the best blues music outside of Chicago. The blues festival will call you there but the roads and the people will have you coming back. It’s a destination like no other and quite simply a great ride.

Check out www.dutchmason.com to keep posted on next years developments and entertainers.