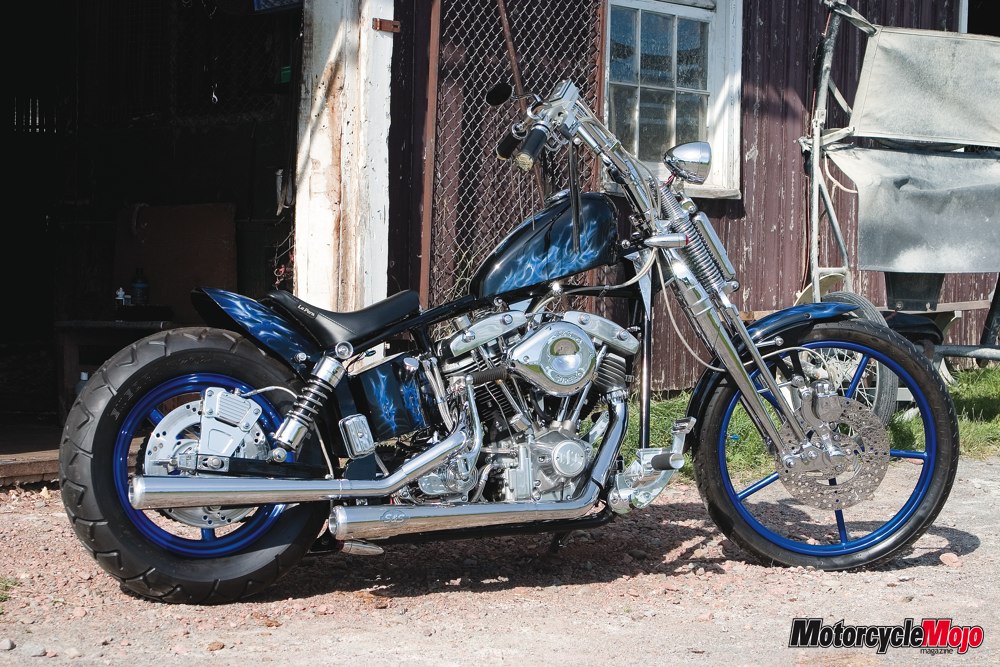 The words from that Beatles tune, ‘With A Little Help From My Friends’ never rang so true for Vinnie Melvin, the owner and builder of this pretty conglomeration of slightly used and old parts. Many of these came from friends or acquaintances who wanted to help a buddy get back on his feet through the therapy of wrenching a bike together.

Vinnie Melvin had good reason for calling his bike Scrap Iron. Most of the parts on it are just that. The bike is a creation of many discarded bits and pieces from many parts of the country, and a testament of many years of friendship.

When Vinnie got back on his feet after a debilitating disease pretty near took him down, he needed therapy, both mentally and physically. Not the kind of therapy where you lay on a couch and tell some stranger your life story, but therapy for his mind, body and soul. Vinnie has been riding and wrenching on motorcycles since he was 15-years old and he is now a tad over 60. Old School to say the least, from a time when friends were friends for life. He had his own shop in the early seventies for a few years but the custom bike scene in New Brunswick was quite limited. “There was a lot of club stuff going on then, and I had built all the bikes there were to build” Vinnie said.

Although Vinnie began to drive truck around the country after he closed his shop, he never stopped wrenching and riding. To say motorcycles have been an important part of his life would be a gross understatement.

The first seven years of the last 14 proved to be a bad time for Vinnie as he was diagnosed with Rheumatoid Arthritis and “wasn’t given much hope,” he told me. “They usually give you between three to twelve years as it attacks your whole body. For about seven years I lived and slept in a chair except for going to a doctor twice a week to be covered in ice to help stop the inflammation.”

Luckily for Vinnie, he became a Lab Rat after latching onto an experimental drug about seven years ago. “My body accepted the drug and the arthritis went into remission and I’ve been on it ever since.”

This is where Vinnie’s therapy comes in. Once he could move again he cleaned out his shop behind his house and, although he couldn’t ride, he could once again pick up a wrench.

Edjo, a good friend of Vinnie’s, knew what was good for him and found an old 80-ci Shovelhead engine at a flea market and shipped it out to him. This was the meager beginning of Scrap Iron. Vinnie’s therapy would now change from being packed in ice to spending his time keeping his mind and body active.

Being short of cash, he began looking for anything that he could afford. Used and cheap was the order of the day. If it once rolled on two wheels, there was no reason it couldn’t roll again. The old Shovel was 20-plus years old, and not knowing the history of it, he thought it best to have a couple of his friends, Mike and Tim at Custom Bike Works in Windsor, ON take a look at it for him. “Another friend of mine had a Martin frame that was just sitting around and had no immediate plans to use it so he practically gave it to me,” Vinnie said.

“I was looking for a newer style Sporty tank so, Mike, another buddy laid a tank on me, and I got the horseshoe oil box from him as well. The pipes came from the same friend that sent me the engine, Edjo called me up and said he had a set of pipes he was going to send out to me, he thought they’d look good on the bike”.

One of the most amazing stories of Vinnie’s build are the wheels. “A friend who travels around the country in a bus doing tattoos was in Winnipeg visiting a buddy of his and he saw an old rolling chassis in the corner of his shop. He asked about it and got the story that the original bike came from a guy named Vinnie in New Brunswick. Vinnie’s tattoo buddy quickly piped up that he knows the original owner and asked the guy if he was willing to part with the wheels.” Vinnie chuckled and continued, “I built this bike in 1971; it had a 22” over Springer front-end and a ’42 Knucklehead engine. I used to ride a lot back then and I put about 140,000 miles on that bike. I had heard it went west after I sold it. Anyway, my tattoo friend’s travels eventually brought him back to St. John and he called me up to meet him. I thought he wanted to do more tattoo work on me. We got talking over a beer, then he pulled out these wheels. I said, ‘By God, those are just like the wheels I had back in the day’. He told me that these are the same wheels and then followed up with the story of how he found them. I bought them from him for a couple of hundred bucks; basically what it cost him for gas to get them to me. The chrome was still good but I decided to powder coat them this time.”

The Springer that now cuts the wind is the third front-end on the bike. Scrap Iron started out with a Narrow Glide and eventually that was swapped out for a Wide Glide, but Vinnie didn’t think either of those did the bike justice and after searching on the internet, he found the ’96 Springer in Tennessee and made arrangements to have it shipped to him.

The never-been-used Lepera seat had been hanging around for years so it quickly saw active duty on the Martin frame and a friend had sent the ’81 H-D Sturgis Primary belt-drive. Vinnie had rebuilt an old kicker 4-speed that was taking up space under a bench and he made that fit. Probably the only thing that Vinnie bought new for the bike was the S&S Super E carb. About the last piece to puzzle was the rear fender. Vinnie made the fender from a piece of 11-gauge stainless pipe, cut it in half and shaped the pipe to fit the frame.

Vinnie knew at the beginning of the build he might never ride again so he started this project with his lovely wife, Wendy, in mind and built it to fit her. Even after the bike was finished he had no intention of showing the bike but at the recommendation of friends and Wendy, he decided to enter it in a couple of shows. If nothing else it would get him out of the house for a weekend or two.

This bike proves that the expensive bikes don’t always win the prize and even a piece of Scrap Iron can hold its own if it’s done right. Vinnie’s bike won the People’s Choice award at the Dutch Mason Blues Festival and Motorcycle Lifestyle Show in Truro, NS and the award couldn’t have gone to a nicer guy. It was Vinnie’s skill, talent and years of knowledge that put it all together to create a winner, but it couldn’t have happened without a little help from his friends, and he’s ever so grateful.

Vinnie, along with his lifelong friend, Mark, have opened a service shop called Cruisers Custom Cycles in St John, NB and they now spend their days wrenching on bikes and selling a few parts here and there.

Check them out at www.cruiserscustomcycle.com. MMM