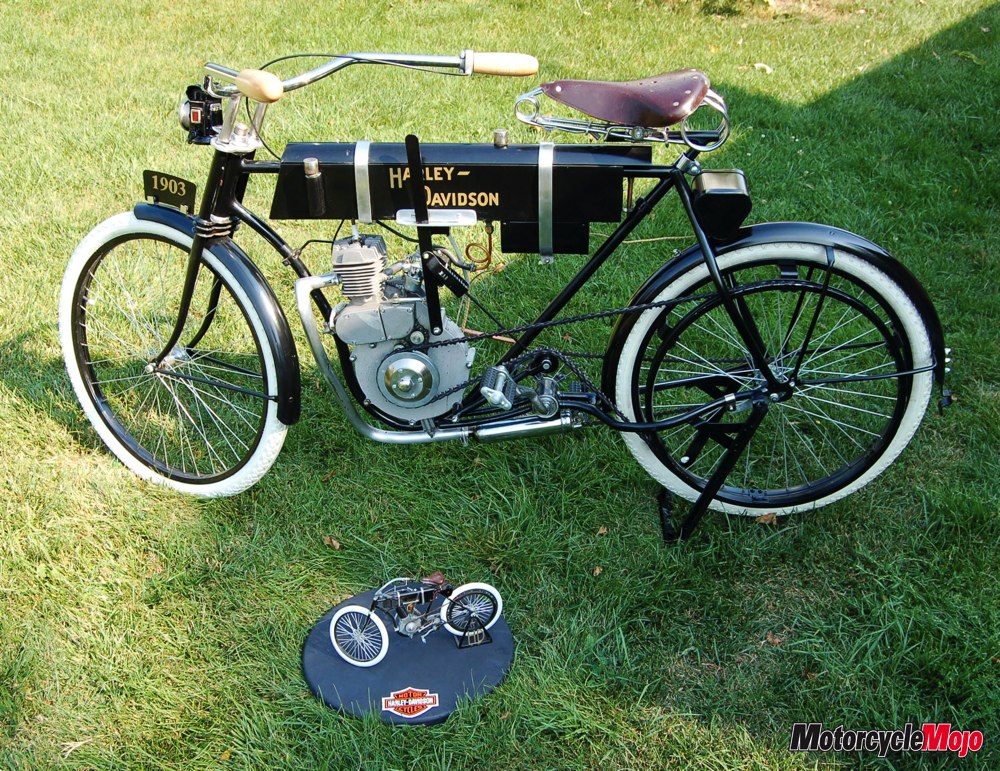 In 2003, during the hundredth anniversary year of Harley-Davidson’s existence, a gent by the name of Emery Groen had an idea. He was wandering about imagining what it would be like to build his own 1903 Harley-Davidson. Now from where I sit, I can tell you that Emery is not your average dreamer. Nothing is impossible to Emery. He’s the kind of guy that builds high-end homes that end up showcased in American magazines. He has the foresight, patience and ability to look at an old rotted-out 1000 Islands rowboat and restore it to its original beauty so he can row a little history around in his Gananoque, Ontario, waterscape. He also incorporated a flight of landing geese into the red cedar shake siding on his drop-dead gorgeous home, and he also built, from the ground up, a 1903 Harley-Davidson. Every part was hand built by Emery and the brand new 100-year old Hog runs like a charm.

I met Emery at his shop that has every tool known to man. Windows are at grade so he has natural light but still doesn’t lose any wall space for much needed tool cabinets. He was leaning on the garage door frame in front of a little Honda scooter and I was chatting with him about a gleaming rowboat that was sitting on a carpeted cradle in the centre of his garage. During the conversation I couldn’t help but be distracted by the white tread of the little ’03 Harley peaking out from under a drop sheet in the corner of the shop. The conversation migrated from the 1000 Islands rowboat to the ’03 Harley but Emery shyly said that he wasn’t sure if his bike merited any pictures in a magazine because, well, gosh, “I built it all myself”. I was darn near ready to rip the cover sheet off it myself but he gingerly lifted the cloth and revealed something rarer than rocking horse poop. A gleaming 1903 Harley-Davidson was unveiled and I couldn’t help but grin. I asked him to tell me the story.

Once Emery had the idea fixed in his head to build the ’03 he immediately went to work chasing down plans, dimensions, specifications and the like, because to Emery, it just ain’t right unless it’s right. Emery went to his H-D dealer and started asking questions, but unfortunately came up empty. Try as he might he couldn’t come up with much accurate data on the little ‘03. Information for the years 1905 and 1907 were easy to get dimensions on, but ’03 just didn’t seem to exist for Emery; he thought his dream was about to be torpedoed and that’s just about the time that he found the mother lode of correct dimensions.

The build was festering away in Emery’s head while he was wandering about in a Daytona Beach flea market and that’s when, low and behold, he came face to face with a factory authorized 1903 Harley-Davidson 1/16th scale model. He knew right there and then that his dream was back on track. He immediately bought the coveted model. After returning to Canada he took the model and measured every part, angle and fitting, literally everything the model could yield was set out on paper and then he began constructing his dream bike from scratch. To say it’s an original H-D would be a fib, but you can be sure it is an original. About the only thing that you can pick out as being different is the cylinder barrel and head, but Emery’s working on that and as the bike sits now, you’d need the model in one hand and Emery’s ’03 side by side to tell the difference.

The frame was constructed and jigged on sheets of plywood and hardware was formed around precise hardwood blocks. The leather sectional belt engages just like the original and the handle bar handles were lathe turned to be an exact match by Emery. Sheet metal was formed to the original curvatures. Some of the ideas for parts were found during travels through Canada and the States at obscure flea markets and from a friend of a friend who knew a friend that had a much needed gizmo, while other parts were converted from one use to another. Emery is especially proud of a tensioning spring that started out life on a screen door and was a dead ringer for the drive belt assembly. Makes me wonder if there isn’t a screen door somewhere flopping in the breeze as Emery skulked off into the night with a precious spring. As we stood looking at the little Hog, Emery pointed out the H-D logo that adorned the fork crown and said: “I think this is the only piece I didn’t build”. I’m sure that given the time he could have put one of those together too. Crankcase castings were also done after making exact cardboard mock-ups that were eventually cast into the real deal.

This little Harley is not a complicated machine by any means, but when you consider that building it exactly as it was a hundred and four years ago from scratch without precise dimensions, it automatically becomes a very complicated build.

Journeying back into Harley-Davidson history shows that the “plant” in 1903 was nothing more than a 10 x 15 foot wooden shed where William Harley and Arthur Davidson laboured at building a motorized bicycle. I would imagine that plans would have been sketchy at best and in that year any ‘plans’ were probably contained in the heads of the two motorcycling pioneers. From what I can find out, there may be one 1903 in existence, but I suspect it’s also a replica so Emery gets a mulligan from me if there’s the odd discrepancy to what two lads built in that tiny shed over a hundred years ago.

To that end, Emery should be incredibly proud of his historical silk purse built from a sow’s ear. Keeping two-wheeled history alive is a very worthy goal. Now tackle another one!