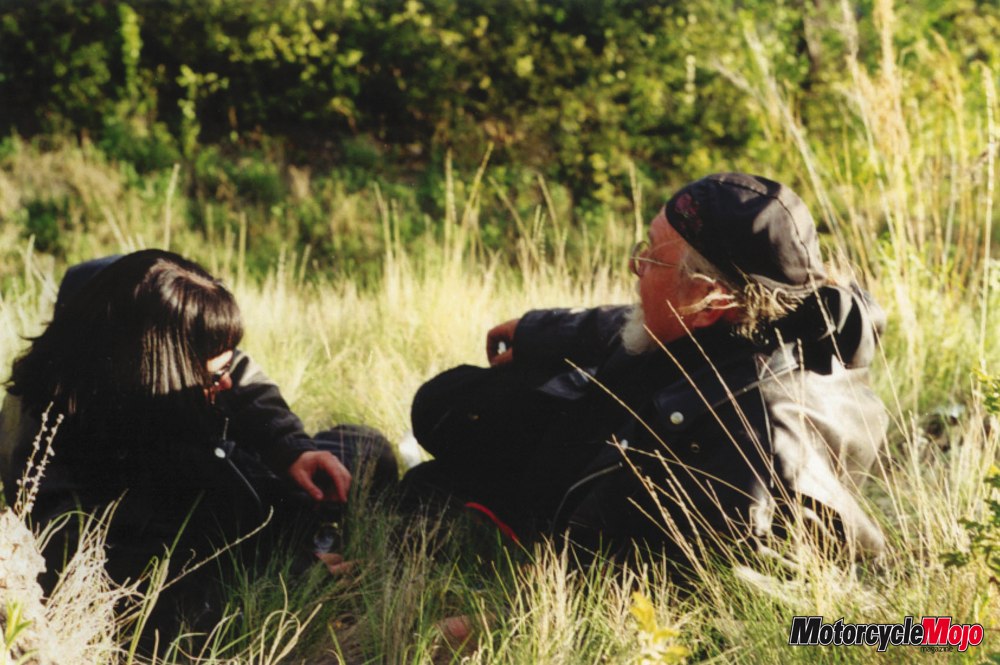 I have an old Viking biker poet friend named Carl Nelson. He lives up in Sointula, a small Viking settlement on Malcolm Island off the Northern tip of Vancouver Island. I love it there. It’s a place of peace and chaos. The full-on westerly storms wreak havoc with the idyllic quiet nature of the island. I like the disparity. I suppose that’s why I feel comfortable in Sointula. It’s like life. It’s real. There is a truth there only the likes of Heaven and Hell have seen.

I usually meet Carl on the road. It’s just our way. We’re both wanderers in spirit, we groove and we ride motorcycles. I find Carl a sage of sorts, a man with a wealth of life, love and stories; he knows what to say even if he’s completely unaware of it. It just flows from him.

Carl is an old warrior. His sterling silver beard with winged tipped eyebrows peaking up from his mischievous blue eyes. Bowing back and forth and then peering over at me as if to say “What’s next, little bear?”

When I stand with him after a long motorcycle ride, he looks longingly at the ocean. His eyes mirror the vast wet vista. He is a salmon fisherman and his heart yearns for the sea and the combat that happens while he is gone. Not the one between him and the ocean, or him and the fish, but the one within his heart. The battles we all have to face. Looking at our own truth.

Thus, it comes to this: mortality and the mortality of old bikers out there who guard our roads.

Recently Carl was diagnosed with throat cancer and given a fifty-fifty chance to live. His response, “Oh well, it’s a good day to die.”

Now, it’s not that he’s being especially stoic, he speaks the truth. Today is a good day to die, especially if you’ve lived your life with love and truth. Whenever I struggle with a problem and don’t know the resolve, I remember his deep voice growling back at me with a tone that makes my knees weak: “Lesley WILL decide.” It’s true. Only you know the answer.

So, when he told me of his sickness, he also casually mentioned that he was bored and needed something new to sink his teeth into.

He needed a challenge. A challenge indeed.

After his first radiation treatment, that he affectionately labeled ‘The Burning,’ he spoke of angels. Angels have often been a topic of conversation between the two of us, but after his diagnosis the subject seemed to hold a life of its own. He told me of his nurses and the crazy therapy where they had to remove most of his back teeth so they could put the apparatus in such a way as to specifically hit the tumors. Oh Carl! Is this the new thing you needed to sink your teeth into?

But Carl spoke softly of the nurses. He whispered how their wings would brush against his shoulders and he felt no pain. He would listen to the gentle flutter of their feathers as they flew by his closed eyes and then–poof! Magically, the radiation was over for the day. That day. Tomorrow was another day.

Carl dreamed of his motorcycle every night. He dreamed of pink salmon jumping through sapphire oceans in search of his net made out of spider web thread and he dreamed of getting better.

He also spoke of “Pig Face.”

Pig Face is the naughty, mischievous and slightly gluttonous side of all of us. Pig Face tries to bite the toes of kittens; his hooves going clickity clack down Hastings Street in search for another slug of cheap whiskey. Pig Face drinks too much and smokes like a chimney, but Pig Face is good because he’s bad. Pig Face also exists so we can forget.

Forget about our pain.

Forget about our life.

Forget about the suffering.

And here’s the thing: Pig Face and Angels are friends. Almost lovers of sorts, you can’t have one without the other.

Carl often quotes a poem and the only line I remember is “…angels with singed wings.” I suppose most of us (particularly in the biker world) can honestly say our wings are a bit singed.

So, ‘The Burning’ continued and Carl faced his cancer like a true warrior. The angels watched nearby and even Pig Face came out to play. Life continued, but in a slow motion kind of way.

Mindfully, Carl and I walked together through the forest, over fields full of dandelions and observing the clouds in the sky with a strange sort of numbness.

Thus, his treatments concluded and Carl was given the thumbs up. He would know the verdict of the radiation therapy after six months. Now, it was time to hit the road.

And thus, somewhere out there is an old Viking poet riding his iron horse through the mountains. He has answers. He’s seen the angels. He knows death on a first name basis. He is a wise sentinel watching over our roads like all the other old guards out there.

If you meet him, ask questions. He will surely answer with a twinkle from those glacier eyes. I can’t wait to ride with him again because he is life. MMM

I want to thank Carl for being in my life, for being one of the most beautiful beings I know. I miss you with all my heart, my friend. I know you are playing music with the angels now and Pig Face, too…Clickity Clack. I also want to thank all the other Old Guard Riders out there who continue to protect our highways in The Way that they do.

For more stories and artwork by Lesley, go to www.motorgirl.com.