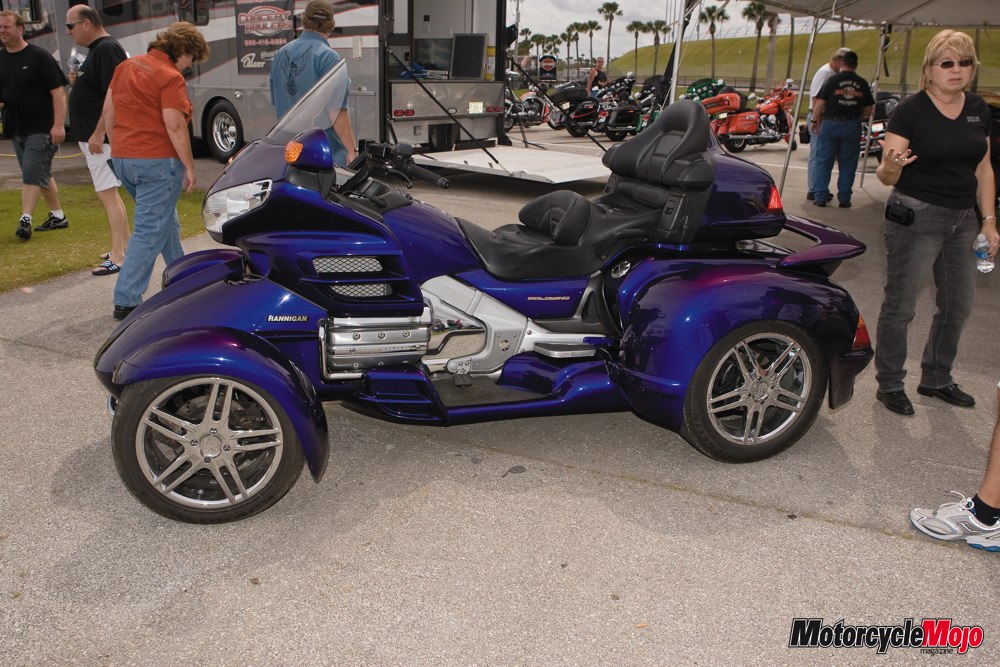 Daytona Bike Week is one of the largest motorcycle rallies in the world and is held annually during the first full week in March. As many as 500,000 people visit the Daytona Beach, Florida area throughout the ten-day festival to enjoy concerts, street festivities, parties, poker rides, live music, bikini and wet t-shirt contests, bars and motorcycle racing.

The tradition of Bike Week has been going on since the inaugural Daytona 200 race that took place on January 24th, 1937 on a 3.2-mile beach and road course, just south of Daytona Beach. For years the races continued being run on the sands of Daytona Beach, supported by flocks of bikers partying during the unofficial ‘Bike Week.’

In 1961, the famous race was moved to the Daytona International Speedway and the tradition of gathering for a week of festivities by all different types of motorcycle riders and racers was continued. During bike week, the Speedway hosts a variety of motorcycle related vendors, manufacturer displays, and racing events including the Daytona 200, AMA Superbike, Supersport and Motocross racing.

Three years ago, I wrote my very first article for Motorcycle Mojo Magazine. The article, titled, ‘Live, Breathe and Think Motorcycle Racing’ was about the riders and racing enthusiasts that couldn’t actually make it to Daytona so their annual migration was to local watering holes and pubs where they watched the events and races on TV.

“It’s Daytona Bike Week,” I wrote, “and although I long to be in Florida checking out the first AMA race of the season up close and personal, I take the next best option and meet up with friends and fellow racers to grab a beer (who cares if it’s only 10 a.m.) and watch the racing action on big screen TVs.”

For seven years in a row I’ve participated in ‘Daytona Parties’ in Vancouver and Victoria, watching the races, and daydreaming about one day being there in person, riding on the banking of the famous Daytona International Speedway, seeing the factory AMA racers in the pits, smelling the race gas, hearing the revving of engines and being an actual part of the crazy bike week action.

This year, instead of watching the action on TV, I was able to participate in one of the main racing events that Daytona Bike Week is famous for, and check out the craziness of Bike Week for myself. It was, to say the least, a mind-blowing…er, a motor-blowing experience.

I drove from Vancouver to Seattle to take a cheap, red-eye flight to Orlando, Florida. Finding myself in a middle bulkhead seat squashed between two extremely large individuals, both of whom required seat-belt extensions by the way, was not a good way to begin the trip. After trying unsuccessfully to fall asleep I opted for a red wine, which proved to be a winning choice.

My plan was to hit Daytona International Speedway the next day for a trackday run by Team Hammer in order to get some initial practice time on the never-before-ridden-by-me-race-course. From there I was to race in the locally sanctioned CCS races over the weekend to gain some more needed experience on the unique and difficult track, enjoy two days of sightseeing around the Daytona and Orlando area and then participate in the AMA 600 Supersport race qualifying on Wednesday, March 5th and the race (depending on whether or not I qualified) on Thursday.

Hooking up with my AMA teammate Josh Galster who had made the epic drive from San Diego, California to Orlando alone, we prepared our stuff and set the alarms for an early morning wake-up call. Driving into Daytona early on the 27th was fairly interesting. The International Speedway Boulevard, the main road outside of the track was already dotted with bikers, and zooming along the freeway were trucks with track/race bikes in the back or towing big race trailers.

Outside of the speedway, set-up for Bike Week was in full swing. Large displays from manufacturers like Kawasaki, Harley-Davidson, and Honda that showcased their different models of motorcycles, scooters, dirt bikes, and apparel were already erected and final touches were being applied. Even the small ponds and man-made lakes were filled with boats and personal watercraft. There were signs everywhere welcoming bikers and informing them of parties, wet t-shirt contests, rallies, sales, dinner specials and riding events. There was even a daunting sign that read, ‘Bait bikes are everywhere, steal one, go to jail.’

Finding the proper entrance to the track was a trip in itself. There are two main entrances into the infield, one for cars and one for rigs and trailers along with a zillion different gates. Once inside we had to figure out how to register, where to set up, where to go for credentials, all the while manoeuvring around pit bikes, race fans and motor homes while negotiating with security guards, all of who had different rules and regulations. I couldn’t believe how chaotic everything was.

Finally, we got a pit set up and after missing the first session of practice Josh and I rolled out onto the track for the first time ever. Having never really paid any attention to the layout of the track before, I had absolutely no idea which way the turns went and I fumbled along trying to get my bearings. Riding on the banking for the first time was insane. It looks as though you are going to ride up a wall, it’s that steep and it throws your balance off as well as your vision, plus, you are supposed to haul ass through there, throttle pinned in 6th gear. Both Josh and I returned to the pits, took off our helmets and said, “Holy crap, the banking is insane!”

The following morning was similar as we pulled in to set up. By 8:30 a.m. I was back on the track and ready for a day of riding. I completed one lap of the track and on the second lap as I was going through the gears on the banking I heard what sounded like the rev limiter. Glancing down to the gear indicator on my 2007 Kawasaki Ninja ZX6R I noticed that it said 6th gear. Puzzled I tried to shift again but it wouldn’t go, and then the noise got louder and I started losing power. Worried that something really bad was happening I pulled in the clutch and proceeded to coast (at about 140 mph) off the track and towards the pits. By the time I reached the pit entrance, the bike had completely lost all power and was pouring smoke from the belly pan, which was now full of oil with chunks of metal submerged in it. I then began to comprehend how lucky I was. The engine could have locked up and I could have bit the dust doing over 160 mph.

Within 45 minutes Josh had the bike torn apart and the motor dropped to reveal the source of the ‘terminal damage.’ A connecting rod had broken and actually pierced the starter motor so hard that it couldn’t be removed. The engine was toast. Various AMA mechanics in the pits told me to encase the starter in glass and have a plaque made to read Daytona 2008 and to keep it as a souvenir (hardy har).

Not wanting to give up on my AMA hopes and dreams I called my motor builder, Eric Dorn from EDR Performance in Portland, Oregon who had my spare bike. Within hours they had the motor drained, dropped, wrapped and dropped off to Forward Air for shipping, complete with a ‘GO Misti GO’ note attached and a promise that it would be delivered by 8 a.m. on Tuesday at the Orlando Airport.

With no racing for me over the weekend, my fiancée/mechanic John and I spent the time helping Josh race and checking out the craziness that is ‘Bike Week.’ On Main Street we witnessed everything imaginable. Thousands of motorcycles cruised the strip from stretched-out Hayabusas with polished frames to super custom painted choppers with massive rear tires, to Honda CB750s complete with sissy bars. There were yellow trikes, purple sportbikes, blue scooters, chromed drag bikes and V-8 powered machines. People with crazy hairstyles, mohawks, mustaches, fake boobs, bikini’s, bare-chested and helmet-less riders. The scenery was spectacular and the debauchery was very obvious. Because I was spending so much time at the track preparing for the races, I didn’t get a chance to really participate in any of the Bike Week indulgences that most of the riders go there for. I was, however, there and that was much better than watching it on TV.

My spare engine had arrived on time and John and Josh spent a few hours installing it. By early evening I once again had a working motorcycle and was ready for qualifying on the following day.

The next day, new rules ensued as the AMA events began and new credentials, passes, parking stickers and tickets were needed. The paddock was filled with the outrageously large AMA race team trailers, tire vendors, privateer racers and fans. It was amazing to see that the fans came from all walks of life and arrived on all manners of two-wheeled machines. One oversized, tattooed and bearded biker in particular looked incredulously upon seeing my rider credentials and approached me to ask a question, “Are you really going out there racing among all those crazy men?”, he asked? “Yes sir,” I replied. Shaking his head in amazement he responded, “You’ve got bigger balls than me! You go girl!” As intimidating as he looked, he had to be one of the most polite and complementary people I have ever met.

Needless to say, I went for it, as fast as I could go in qualifying and I managed to make the cut! With only an hour of practice, I qualified to the 44th position out of 51 riders. During the 22-lap AMA 600 Supersport race I managed to move up to 41st position before the checkered flag dropped. Only a handful of female riders have ever qualified at Daytona. Running in the race was amazing and will remain one of my most memorable experiences.

One of the most amazing things to me, however, was how united all of the riders at bike week were. It didn’t really make a difference what kind of motorcycle you rode or what you looked like, how much money you had or what your occupation was. Everyone who was there was into motorcycles of some kind or another, and they were there to enjoy the spirit of riding. Whether or not they were the track day riders, CCS or AMA racers, sportbike fans or die-hard Harley riders, they were all enjoying the spirit of motorcycles, camaraderie and the freedom of the ride. It was, a motor…er, mind blowing experience!

Misti Hurst is a motorcycle racer, an instructor and a freelance writer. Visit her website www.mistihurst.com