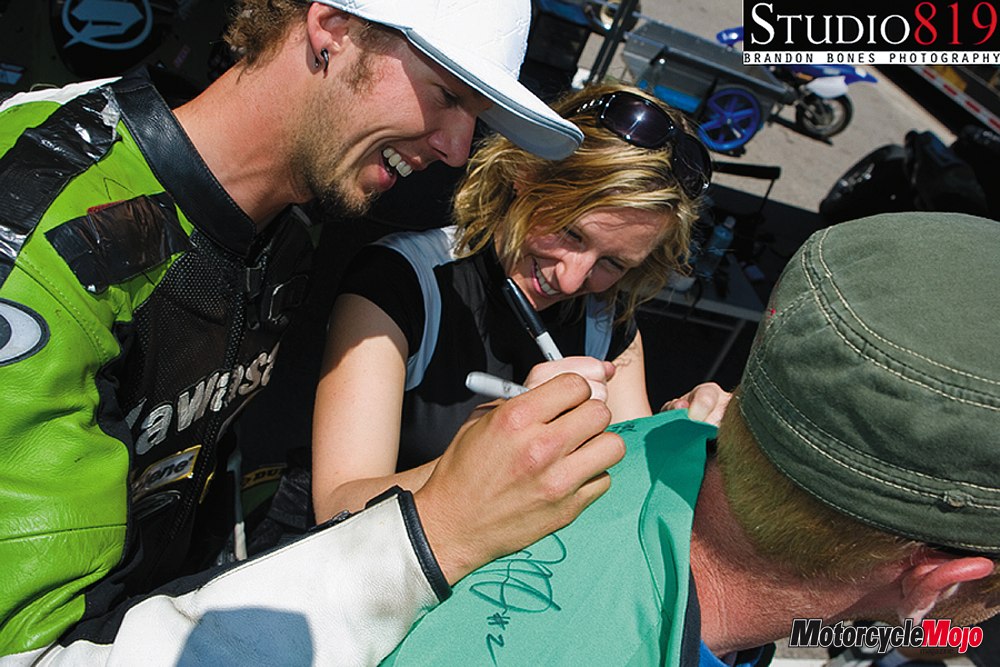 For my eleventh birthday my dad gave me one of the most memorable presents I have ever received. It was a white pillowcase with a colourful rainbow painted on it in shadowy brush strokes. It read, “Follow your dreams, Misti. Love Dad.”

We were on vacation in Hawaii at the time. I carried it with me everywhere I went and cried myself to sleep after I left it at the airport en-route for home. We called the airlines and begged them to look everywhere for it. Thankfully we got it back. It has been protecting my pillows and holding a prominent position on my bed for the past twenty-one years.

‘Follow your dreams’ became a mantra for my life after that. From such an early age my parents taught me to charge forward with fire and energy toward everything I ever wanted. They taught me to push through adversity and to never give up.

They watched cross-country races and gymnastic meets, basketball and volleyball games, martial arts belt tests and scholarly graduations. They patched me up when I was cut or broken, they cheered me up when I was down, and they gave me that extra little push whenever I was hesitant. They were there to cheer for and encourage me no matter what goal I was trying to achieve, or what direction I was choosing to go. At least, up until the moment I started racing motorcycles.

At the age of twenty-five I announced to my parents that I wanted to be a motorcycle racer. This didn’t go over too well. Up to this point I had been jumping out of airplanes and off of bridges, flying down snow capped mountains on skis and snowboards, and down rocky trails on mountain bikes. Despite the fact that they were used to their little girl being a daredevil in every possible respect, the move into the motorsports realm wasn’t well received at all.

My dad was in the motorsports business, which made me falsely believe that he would be stoked on the idea. He’d been following the Indy circuit for years and unfortunately knew what could happen on a racetrack. He knew first hand how devastating crashes could be; he had lost more than one good friend. The prospect of his little girl racing on the same tracks as some of the Indy cars was just too much. “I know enough about your personality to be sure that I can’t stop you from doing this,” he said. “But I won’t support it, financially or otherwise. I don’t want to know about it, I don’t want to hear about it, I don’t want to watch it.” It was his way of hiding the fact that he was scared.

Being as cheeky as I am, I reminded him of the fact that he was the one that had taught me to follow my dreams in the first place. I even brought the pillowcase to him and showed it to him. “Remember this dad, you TOLD me to follow my dreams. These are my dreams.” I said. “I could get hurt crossing the street, I could die in a car crash, what is the point of life if you don’t LIVE it?”

I followed my dreams with passion, fire, drive and intensity anyway, without their support. For an entire year I didn’t tell them about my racing. I didn’t even send them race reports, that is, until I won my first race.

My dad was the first person I called. “You won?” He asked. “Holy smokes Mist, that is AWESOME! We’ve got to send out a press release immediately! I’ll make some calls, I’ll draft up a sponsorship proposal, and I’ll call some guys I know at the newspapers!”

My dad is probably my number one supporter now, but he still doesn’t like to come to the races to watch me. The one time he did come to watch, I proceeded to high side myself to oblivion, following which I laid on the racetrack, not moving for a few daunting minutes. He would prefer to wait and hear from me after the races to make sure I’m okay. But he did realize that being supportive of my dreams, regardless of how scary they might be, was better than separating himself from me and not being a part of the successes and the failures, the ups and the downs.

I just finished racing the AMA Supersport race at Barber Motorsports Park in Birmingham, Alabama. During lunch hour on Sunday, the factory teams held autograph signings outside their trailers. My teammate, Josh Galster and I were hanging out in our little privateer pits eating lunch when a family with a little girl stopped by to look at our bikes. I heard the dad say, “See, it is a girl that is racing out there with the boys! I told you!” The little girls eyes were wide and bright, she must have been about five-years-old.

I got up, went over to her, introduced myself, and asked her if she wanted to sit on the bike. Her eyes got bigger and even brighter, and she smiled so big it made my heart ache. I showed her how to climb on the bike and her proud parents took some photos of the two of us together. She was so excited. The father thanked me for taking the time to make his daughter so happy, and for showing her what girls could do. I started to think about how I might just have influenced that little girl, how I might just have encouraged her to bust through the stereotypes and do whatever it was in her life that she wanted to do. I may have just taught her, in that moment, to follow her dreams. It was a pretty powerful moment and I was reminded of my dad, and my pillowcase.

Pretty soon, both Josh and I had a mess of people gathered around our pits asking for photos and for us to sign their shirts and hats, shoes and cell phones. We both took the time to talk to all the kids, to pick them up and sit them on the bikes, to show them how to turn the key and to start the engines. We asked them if they rode bicycles or dirtbikes and what they wanted to be when they grew up. It was such an awesome feeling to be surrounded by these kids with bright eyes and happy smiles, and to be in a position where we could encourage them to press on and to go for it.

I never rode motorcycles when I was a kid. I wish I did, but I had my hands full with other activities and other sports. I see kids now riding bicycles and mountain bikes, skateboards and dirtbikes, and even little mini roadracing bikes. I’m so proud of them and their parents for taking on the sport. It’s hard for parents to support something that is inherently dangerous and yet I see it all the time, with my own parents, with parents at the track and with the parents of the young up-and-coming racers. It’s awesome, and I encourage all the motorcycle enthusiast parents out there to teach your kids about motorcycles, the love of riding and most importantly about following their dreams.

After the race at Barber, I realized that I was now in a “role model” position for some of these kids and that I could influence them positively and make an impact in their lives. I made a pact to myself to be as good of a role model as I could be, to take the time out to talk to the kids one-on-one and to have things like stickers and posters to give them to remind them to always go for it. It’s what my dad taught me, and I’ll pass it on. There are dozens of kids out there now with posters, not pillowcases, that say, ‘Follow your dreams Kiddo! Love Misti.’

After I wrote this article I checked my webpage and saw that a few parents from Barber, and the California Speedway the following weekend, had signed my guestbook. Their comments brought tears to my eyes.

“Misti, thanks for taking a minute yesterday to talk to my daughter, Victoria. She’s now your newest little fan! I appreciated it because I try hard to tell her that girls can do anything boys can do, and even in kindergarten she’s already being told that’s not true. You helped make her Dad look right again. She was just stunned to meet you! So again, thanks.”

“Misti. Thanks for taking the time to talk with my kids after your race at Barber on Sunday. My daughter, Kathryn, was very impressed that a ‘Girl’ could do what you do, as was Dad. Thanks again, best of luck to you and your team.”

“I want to thank you for your courtesy and kindness in the time you spent talking with my daughter and her friend at last week’s Cal speedway practice day. It was a big deal for the girls to see a woman riding competitively and they wanted to meet you. I know that when at the track you are working but the graciousness you showed in taking the time for an autograph (the helmet), a picture (on your bike no less) and a chat meant a lot. You now have three more fans. Keep it up. Hope to see you on the podium one day soon.”