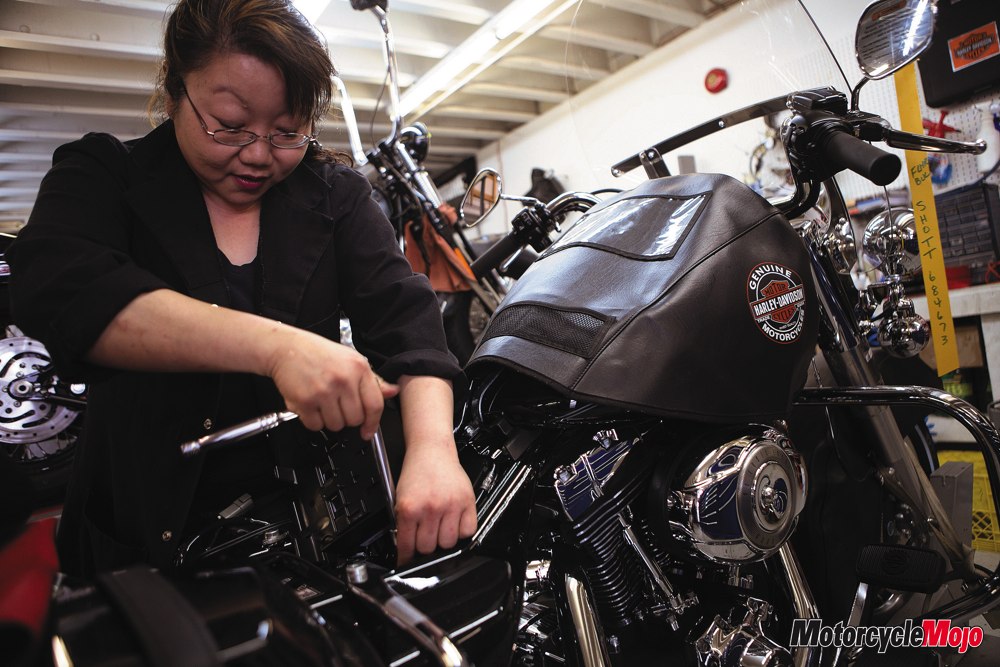 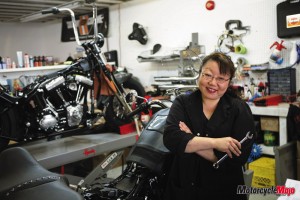 Susan Poon is an expert at shifting gears. After working in tourism, then as a freelance photographer, she dreamed of travelling the world—so she signed up to be a motorcycle mechanic.

Not the typical career path most follow, but the unusual progression makes perfect sense to Susan, who currently works on the bench at Heritage Harley-Davidson/Buell in Edmonton.

“It was all about my desire to travel,” Susan says, explaining her new direction. “I wanted to see Europe from the back of a motorcycle, so I asked myself what I’d need to do that.”

For most, the obvious answer would be a bike, something Susan didn’t own at that point. But never one to do things by half-measures, Susan decided she needed more; she wanted to know how to maintain and repair a bike as well.

In the back of her head was the memory of a very bad auto repair experience. “Women are too often taken advantage of at repair shops, and I really got taken,” says Susan. “It was horrible; I said never again.”

Also shaping her decision were some personal matters. Susan had switched to a part-time retail sales job to allow her more time with a family member during a lengthy illness. “I did a lot of thinking about what was really important, what I really wanted. Learning to ride was on my ‘bucket list’, then I decided to do something crazy, completely outside the box. I’d be a mechanic too.”

In June, 2005, Susan crossed one item off her “to-do” list. She took an Alberta Safety Council course and became a rider. “The first time I got on a bike—oh my god!—I was so excited I was shaking,” Susan remembers. “I didn’t want to be the only motorcycle mechanic who didn’t know how to ride, so I took care of that first.”

Now ready for more, Susan knew she faced a steep learning curve. She had no mechanical experience, had never taken a small engine course and wasn’t familiar with tools. “I had no idea—not even ‘righty tighty; lefty loosey!” she candidly confesses.

Minor details, for this determined woman. Susan’s research revealed that NAIT (Northern Alberta Institute of Technology) was the place to go in Alberta for training. Not only was NAIT’s campus in the small northern town of Fairview, the only place in Alberta offering the four-year apprenticeship course, it was also the only authorized training centre in Canada for Harley-Davidson motorcycles. (Unlike other provinces, Alberta requires those working as motorcycle mechanics to be a registered apprentice, certified journeyman or hold a recognized equivalent trade certificate.)

Susan applied for and was accepted into both courses, but chose the 28-week motorcycle mechanic pre-employment course, which would let her challenge the first year of an apprenticeship on completion. She packed up and headed north after taking care of one last bit of business.

“I’m Asian, and Asian families are very close, so I had to get my parents’ approval first,” Susan notes. That came surprisingly easy. “My mom said ‘Go! Time for a change! Just be safe and wear a helmet.’ They were both very supportive.”

Susan found herself the only woman in a class of 23 students, ranging in age from 18 to mid-40s. That didn’t bother her one bit; she greased up and buckled down to learn. She completed her pre-employment classroom time with no major problems, thanks she says, to excellent teachers, lots of hands-on training, and her complete focus on the tasks at hand. Susan found it easy to concentrate on her studies, aided by a good memory and a natural mechanical aptitude. She completed classes early in 2006.

Then came the hard part; finding a shop to accept her for a six-week work practicum. Susan didn’t just want any shop; she wanted one that would later consider hiring her and sponsoring her as an apprentice.

“It was a very daunting task,” Susan admits. “I’d walk into a shop, and being a girl, they’d think I was joking. When your name is Susan, not George or Michael, it takes a lot more convincing.”

After approaching many dealerships in and around Edmonton, Susan found someone who’d take her seriously: Autumn Murphy, the dealer principal at Edmonton’s Heritage Harley-Davidson/Buell. Still, it wasn’t a case of getting a free ride from a fellow sister. As Susan puts it, “Autumn was very to the point. She said, ‘I’ve got to warn you. We’ve had women working in the shop before and it didn’t work out.’”

Murphy laid out some ground rules: Susan would start as a shop hand, detailing and taking care of other minor jobs. “Autumn wanted to see how I worked, how I’d fit in and what the shop dynamics would be first,” says Susan. “I accepted.”

Susan doesn’t like to make a big deal about working as a woman in an occupation dominated by men, or place too much emphasis on the macho overtones traditionally associated with bikes. She wants to be judged on her ability to get the job done, not her gender. “I don’t want to be a novelty item,” she states. “I’m here to cut my own path; it’s mine to make. I didn’t come into the industry expecting everyone to be warm and fuzzy; I did expect to be treated as an equal and have equal opportunities. But it’s really scary how uphill it still is.”

Susan quickly learned the realities of life on the bench. You can’t go in saying, ‘Hey, treat me like an equal!’ You have to earn it. The men will stand back, watch you and decide if you’re worthy. You can’t say ‘Ow!’—a normal girl reaction—when you cut yourself. The guys just say, ‘Watch it—stop bleeding on the chrome!” They don’t give you hugs. And they constantly tested me. They wouldn’t let me get away with calling a part a doodad, even when they knew what I meant. I had to use the correct term. If there was something I didn’t like doing, they’d call me on it. If there was something I didn’t know, they’d call me on that too. You have to be a trooper—and still be true at heart to what you are. Any apprentice has to pay their dues, but the fact is it’s harder for a woman.”

A good sense of humour went a long way to carrying Susan through the tough times. She earned more responsibility, doing oil changes, then repair work under supervision. She also completed NAIT’s 15-week Harley-Davidson® Technician course while still employed at the shop, to gain more credibility. Her second year of apprenticeship was challenging; sometimes she thought about quitting, but she persevered and is serious about completing her remaining two years. And, she now owns a ride of her own, a 1984 Honda Night Hawk 750.

Her biggest challenge remains moving bikes in and out of the shop, not an easy feat for a small woman. “I know my limits in terms of my size and ask for help. It hasn’t been an issue with the other mechanics. The good thing is, whether you’re female or male, it all comes down to can you get the job done. Mechanics is an area of no compromise; you’re in charge of a rider’s life. If you screw up, you could kill someone. So mechanics take their job very seriously—even though we have a lot of fun.”

Susan knows she’s not the fastest mechanic, but she’s careful and thorough. “That probably gives better results than some mechanic who charges ahead and maybe misses something.” She’s reached the point where co-workers now talk shop with her as an equal, and seeing her banter and tease them shows she’s accepted as one of their own. It’s a position she’s worked hard to achieve.

“I don’t care how well-trained a woman is, you still have to work harder and smarter,” Susan concludes. “I’m still constantly proving myself.” But for Susan Poon, now well on the road to being a certified journeyman—or rather journeyperson—motorcycle mechanic, she wouldn’t have it any other way.