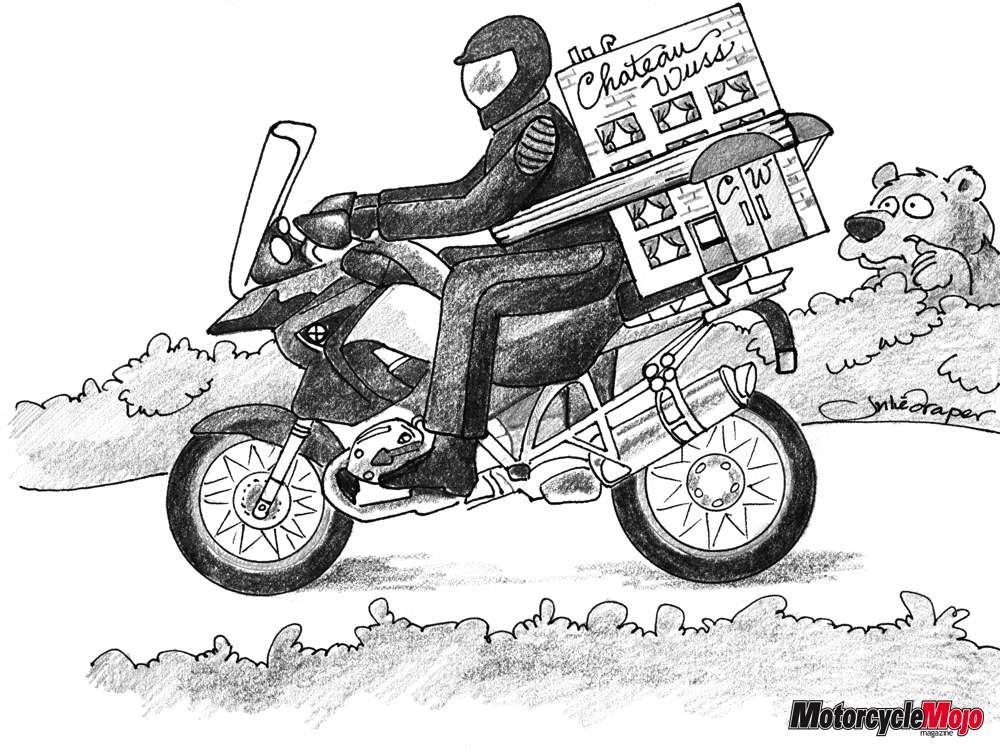 I’m planning a ride. I’m going north for a wee bit, actually more north than just a bit. Inuvik is calling me; along with Inuvik’s Mayor who assures me that he has a fine single malt waiting for me. I figure a little ride time is worth the price of admission, besides everyone needs an excuse to ride. For those of you lacking a really big Rand McNally atlas the directions are simple. Go to British Columbia and hang a hard right, then go ‘til ya run outta road. That would be Inuvik; or thereabouts. I’m sure there are a few turns I neglected to mention and if I do it all wrong, ‘they’ tell me I’m likely to end up as bear scat, although I’m sure ‘they’ exaggerate. Up until a few days ago I was happily hammering out a route in concert with my indignant Garmin lady. The trip planning process was going just dandy, until I hit a wall.

I’m a wuss. I confirmed that little gem last week. Actually, I’ve always known I was a wuss, but over the last few days several people have reinforced my whole pissy pants persona, sometimes in very unflattering terms and it all revolves around the word ‘camping.’

To me ‘camping’ is a hotel without a concierge. In my books, a Motel 6 is camping and the Igloo Inn, in Grande Prairie is positively roughing it. Let’s face it, when you check into a good hotel, all you need is a change of clothes, a tooth brush and a credit card, the stouter the better; how simple is that? Camping is just so, oy, complicated. Take a tent for example. Have you looked at how many different tents there are? It’s mind-boggling. To pick the right one I go into several outdoor stores with some very simple requirements. I want a tent with secure parking, a good shower and a Sealy Posturepedic. Balconies are optional but it’s all gotta fit on the back of my GS and weigh less than ten pounds. Okay? Judging by the response, I either need to do something anatomically painful with my credit card or some salespeople have absolutely no sense of humour. I haven’t picked out my casa yet.

The next kerfuffle is about where I plan to camp. I’ve been told that I may interact with bears. No problem, if I can ride the 401 and live to tell the story, bears will just be a minor inconvenience. Besides, they make stuff for bears, like Deep Woods Off only stronger. Did you know that there are different levels of pepper spray? At the top of the chemical compost heap is the industrial strength – bad guy armed with a .45 spray, but only Coppers get to play silly buggers with that stuff. Then there’s your typical dog and bear spray, with dog spray being the less potent of the two. I read the labels on a few different cans and I can’t help but ask: who the heck checks this stuff out? Bad guy spray is a no-brainer, hang around the Jane and Finch corridor for about six minutes and you’ll get first hand results, but bear spray? The company that makes the stuff must hang some ham sand-wiches around the junior mail clerk and chain him to a redwood. “Okay Bruce, look scared.”

Portable stoves: My idea of a portable stove is a Weber Genesis, complete with that little radiant gizmo in the back. Not so for camping. There are stoves that run on gasoline, propane, butane, blue anthracite, and I’m sure there’s a Korean model that uses enriched plutonium, none of which have that little radiant thing in the back. So much for a perfectly seared roast. Another note is that size is reverse-proportional to cost. If you want a teeny-tiny stove, be prepared to shell out the equivalent of a Garland eight-burner commercial range. Guess I have to settle for a night in the cuds with a pasta flavoured ‘boil in a bag’ and a box of Chianti.

Sleeping bags: Now there’s a statement. How many people would line up at a five star resort where you get to sleep in a bag? Potatoes come in a bag, so do onions. People are not meant to sleep in a bag. That being said, there are some substantial bags out there. Some are good for under 20 C and others are supposedly good for -40 C depending on what temperature freezes the nuts off yer bridge. The price is again reverse-proportional to temperature. I’m sure it’s a conspiracy practiced by all camping supply joints.

Next on my list is a ground sheet or air mattress. If I ever do get to sleep, it will most likely be on perma-frost. That’s a real warm thought. In general scientific terms, heat travels from hot to cold and the arctic landmass I’m planning to nod off on is probably big enough to suck out every British Thermal Unit I own and then some. I’m thinking my ground sheet should be substantial thus it’ll probably end up being an air mattress. Now I need a compressor. See how things snowball?

Those are just a few of the ten thousand widget-whatchamacallits that I need to procure and that’s just the tip of the iceberg. Now, I gotta figure out how to set the whole sodden mess up before sunrise rolls around or Yogi and Boo Boo might come a callin’. I think I need to take a course. MMM