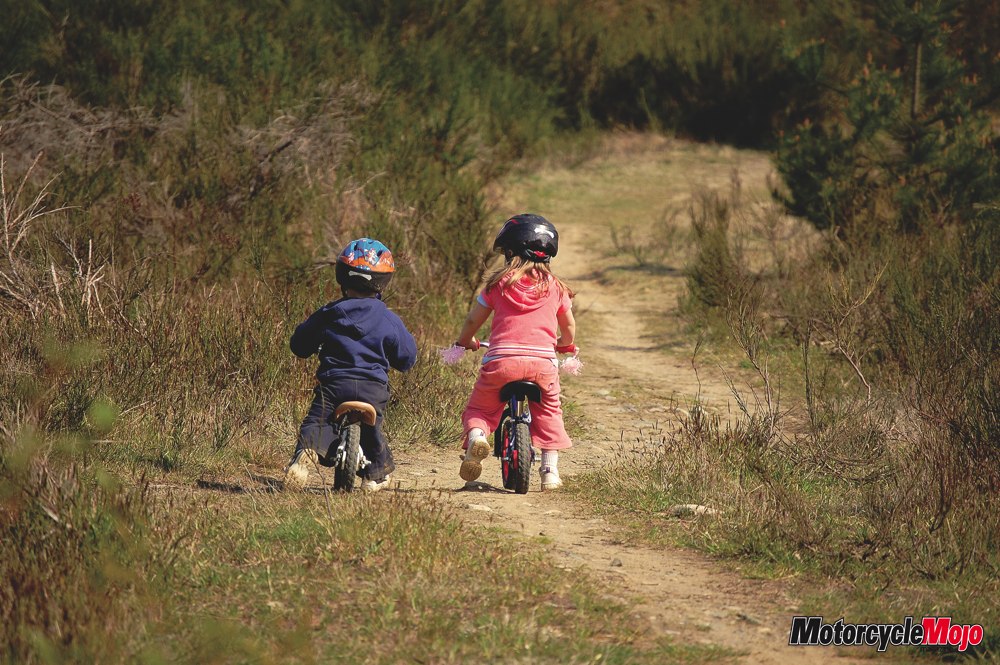 When it comes to learning something new, it helps to focus on doing just one thing at a time. Take motorcycle riding for instance, if you try to teach a brand new rider how to ride and you begin by saying, “OK, this is the clutch, this is the front brake and the rear brake is over here, this is the throttle, here’s how you shift, put it in first, let the clutch out, roll on the gas…” The rider’s eyes are going to roll around in their head, a look of confusion will settle on their face and more than likely, they will stop you and say, “hang on a second…how do I start this thing?”

It helps tremendously to break things down into little chunks of information that the student can focus on, understand, learn and then move onto the next little thing. This is the foundation of how I was taught to coach at the California Superbike School. Every riding technique is broken down, only one thing is practiced at a time, and only when the rider has a grasp of the first lesson, do they move forward and onto the next lesson. As coaches, we are taught the importance of having an easy gradient. We are warned to never overload the student with too much information or with too many things to work on at once.

There are several benefits to this method of teaching. First of all, it’s easier for a student to learn something new if it is broken down into one or two simple actions, making it easier to learn and less confusing. They are more likely to really grasp the concept being taught and master it than if they start off with a bazillion things to try and do all at once.

For example, the very first lesson that we teach at the Superbike School is “throttle control.” The format that Keith Code uses to teach this exercise is 4th gear, NO Brakes.

“NO BRAKES?” the students ask with wide eyes.

The reasons for this format when working on throttle control are simple. First of all, most riders have a lot of attention on the controls like brakes, clutch and gears and often spend too much time worrying about upshifting and downshifting and braking for the corner. Code found that by taking away some of these control actions, the riders could focus more on learning the task at hand, throttle control.

Having the students keep it in 4th gear means that they don’t have to think about what gear they are in or when to shift, only when to roll on the gas. This gives them a greater sense of what rolling on the gas in the corner does for the bike because it is not muddled up with other actions, like shifting. The students have the opportunity to really FOCUS on what is happening with their bikes with regard to throttle control.

Taking away the brakes does a similar thing in that it removes another control action that riders often rely heavily on. It also forces the rider to work on their sense of speed without using the brakes as a crutch. A lot of us, myself included, tend to rely on the brakes too much and end up going through the corner much too slowly.

“Arrrrrgggggggg, I didn’t need to slow down that much!” I often shout to myself in the middle of a corner that I have just messed up. I call it ‘safety braking.’ A little safety squeeze of the brake lever before I turn the bike into the corner–just because it felt a little fast going in, or because it seemed like the safe thing to do or just because it’s habit–even though it wasn’t needed. Riding around a track in 4th gear with no brakes means that you have to really understand your sense of speed, you have to learn it and you have to overcome that reassuring need to pull on the brake lever a little.

I often practice this on my own when I get to a new track and it is amazing what the initial reaction is as you are going towards a corner with no brakes, “Ahhhhhhh, yikes, too fast tooooooo fast…,” then you turn in and realize that it was no big deal and you actually could have gone into the turn much faster.

A lot of our riders find this exercise difficult, but well worth the effort. They better understand the concept of entry speed, they focus on their throttle control and they quickly learn something new.

The other benefit to the ‘one thing at a time’ method of teaching is that there are more triumphs for the student. There are more times where they feel those, “Ahhhh ha! I did it!” moments. Everyone likes a sense of accomplishment and with this method of coaching, every little thing learned is its own triumph.

This is not a new method of coaching or teaching by any means and it is not simply a technique that is used for teaching motorcycle riding, but it can be used when teaching anyone, anything.

I have two nieces and two nephews all under the age of five. Being auntie Misti the “motorcycle racer” means, of course, that I want to corrupt those little kids and get them hooked on riding ASAP (regardless of what my bro and sis think). I always wondered what the best way of teaching them to ride was going to be. I knew they had to start on a bicycle and get good, but I wanted them to get good fast so I could buy them dirtbikes right away. I started to investigate kids bikes, figuring, like most, that I would start them on tricycles, then move to bicycles with training wheels, then take the training wheels off etc.

Imagine my surprise (and immediate intrigue), when at one of the Superbike Schools I saw two little blond moppets, tiny little guys, ripping it up on bicycles. The youngest one had to be barely two years old. As I got closer (I’m a bit of a magnet when I see kids) I realized with astonishment that the bicycles they were riding had no pedals and no brakes. I watched in awe as these two kids, obviously brothers, propelled the bikes forward with their feet running along the ground, and then lifted their feet off the ground to coast along when they had enough speed. The kids had balance.

Here were these tiny little kids who were balancing their bicycles, even steering around corners, and going fast! It didn’t stop there either, the brothers, spotting a hill, squealed with excitement, ran/rode over to the hill, ran/rode up the hill, turned around, pushed off, and rode/coasted down the hill, still squealing. The older brother flew down the hill without so much as a blink despite the fact that he was hauling, while the younger brother, realizing he was going a little fast for his comfort zone, simply put his feet down on the ground, dragged them a little to slow himself down, and then picked them up to resume. I’d never seen a kid so small ride a bicycle so well.

I went over to their parents to inquire. “What kind of bike is that?” I asked. “It’s called a run bike,” said the mother. “We got it over in Europe. It’s easier for the kids to learn on because there are no pedals and brakes. They just sit on it and learn by themselves how to push it forward. When they are ready, they realize they can lift up their feet and coast. They figure out balance quickly and easily and then move to bikes with pedals and brakes without ever needing training wheels.”

“Wow,” I thought. “Just like how we coach at the school. This is amazing.” Finally, the exact concept of learning something one thing at a time that I knew and trusted was being presented (for the first time that I had seen in North America) on a kid’s bicycle. I knew immediately what my mini relations were going to get for Christmas that year.

I researched it for a while on the Internet, typing up ‘Run Bikes’ and being directed to sites that sold over-priced wooden versions of the bike. I did find, however, that Norco sold an aluminum version of the bike for a hundred bucks. SOLD! I purchased two, one for my two-year old nephew, Kellan, and one for my four-year old niece, Locklyn. My sister thought that Locklyn would be too big for the run bike and that a pedal bike with training wheels would be better, but I bought them both anyway, convinced that she would learn faster and have more fun on the run bike. I was right.

Both kids took to the bikes immediately, and both, after only two months on the things were themselves, hauling down hills and even burning it up at the mountain bike park. They push themselves along, they lift their feet, without any instruction whatsoever, and they learned balance, a sense of speed and how to steer. And they love it.

My sister gets stopped everywhere she goes now as the two kids ride along beside her while she pulls her third, one-year old Linden, in the buggy behind her bike. People inquire with huge eyes, “What kind of bikes are those? The kids are so small. They ride so well. There are no pedals.”

I check up on them whenever I can and I gauge their progress as I ride with them. Kellan’s only two and a half but I figure he’s just about ready for a dirtbike and Locklyn is already asking for one. Now I’m shopping for 50 cc dirtbikes. My sister is going to kill me!

If you are going to teach someone something, whatever it is, try to break it down into small chunks. Make sure they understand the pieces before they try to put them all together. They will learn faster and easier. Make it simple, one thing at a time. And if you want to teach your kids to ride, get a run bike. They will be ripping it up in no time!