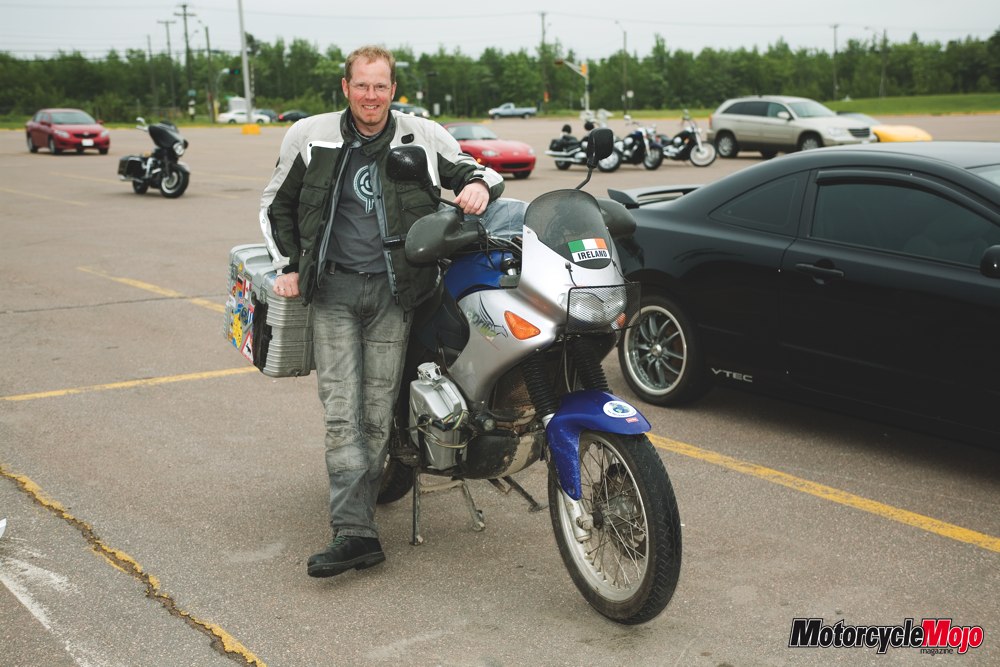 You never hear anyone say, “This summer is dragging on,” unless maybe they are a skier or snowmobile enthusiast. I know it sounds cliché but how many times have you heard, ‘This summer flew by so fast.’ Six simple words that are muttered every fall by Canadian motorcyclists. Although by the time you read this, we will hopefully still have a couple of months left in our riding season.

During this outstanding summer my travels have taken me across the country albeit with not as much seat time as I would like. As always my travel dates are very time sensitive and since they take me from coast-to-coast, they require me to line the coffers of my favourite airline instead of filling the pockets of the major oil companies. Somedays I feel like a Westjet employee.

My first major trip of the summer did require the use of an airplane, however, I was able to log an equal amount of travel by motorcycle between my flights there and back. I flew to Edmonton and picked up a 2008 Suzuki 650 V-Strom from Riverside Yamaha Suzuki KTM in St. Albert. My purpose of this flight was to hook up with Mike and Al’s Big Adventure, a ride that brings two brothers together every year for a trip to a different part of North America. This year their ride took them to Alaska; however, this big adventure was different than it had been in years past, they had company. Joining them would be two others plus myself for a total of five riders. The scenery was spectacular, the roads for the most part were awesome and the riding company excellent. You can read about Mike and Al’s Big Adventure in more detail starting on page 58.

I also spent some time in Newfoundland this summer. It had been two years since I travelled to the Rock during a whirlwind trip from the ferry dock at Channel Port aux-Basques, up the Trans Canada to Deer Lake, hanging a left through Gros Morne National Park and riding as far as I could on the Northern Peninsula, ending in St. Anthony. I stayed there for the night and the following morning did the return trip back to the ferry. I didn’t see much of the island or speak with many of the people and had always wanted to return. This time back was more relaxing and we had time to see some of the sights and speak with many of the people that crossed our paths.

Heck, we even had time to try cod cheeks and tongues. I know they don’t sound too appetizing for the mainlander, but they are tasty and I highly recommend them if you make it out that way.

While the sights in Newfound-land are different than that of the Yukon and Alaska, they are no less spectacular. Instead of white-capped jagged mountains in the northwest, there are massive round mountains of the Long Range Mountains, and quaint fishing villages that draw you in to their beauty and inspire you to check out property prices. I would consider the Newfoundland people to be some of the best in the world. Without question, I’ve never met a Newfoundlander that I haven’t liked.

If there is a downside to the far reaches of Canada, as I found out in the Yukon and Newfoundland, is that the riding season is only two to four months long. While I’m sure the residents would like to have more saddle time, they accept the compressed riding season and enjoy it while they can.

Where I live, I have been known to sneak in seven or eight months of riding. Then there are those on the west coast who can possibly sneak in close to a year of riding if Mother Nature cooperates. I have seen many bikes on the road in southern BC while attending the Vancouver Motorcycle Show during the fourth week of January.

I’m going to turn over a new leaf. My oath—I promise from now on that I will no longer think that our summer goes too fast, and I will be grateful for the riding time that I manage to get.

My details for the Harley-Davidson 105th Anniversary Bash in Milwaukee at the end of August are being finalized and I’m anticipating it will be a great ride.

Also planned is a long awaited ride to the Tail of the Dragon in Deal’s Gap and the surrounding area of North Carolina and Tennessee. This is one region I have wanted to ride for years and thanks to Roger (our sales rep), it will happen this year.

Since we are on the subject of getting in some riding time, we have recently heard of the whereabouts of Vladimir, the Russian deaf mute motorcycle traveller that we were keeping our readers up to date on during his adventures around the world. A couple of years ago, many of our readership would eagerly look in the pages of Mojo to find out ‘Where in the World is Vladimir.’ We had lost touch with him in 2007 when we last heard he was in Hong Kong. For those of you who have called or emailed wondering where he is, I’m happy to report he has been seen happy and healthy in Kuala Lumpur, Malaysia. Thanks to Marlies and Alan Sands for the update on Vladimir.

While we were in Moncton, NB for Atlanticade during the last week of June, we met Paddy Tyson, an Irishman who is taking two years out of his life to travel around the world. He had, just recently before our meeting, landed on Canadian soil at the Halifax dockyard with his Aprilia Pegaso.

Paddy is no stranger to motorcycle travel. He has ventured through Australia, New Zealand, the Philippines, North Africa and Europe. On top of that riding experience, one of his jobs in Great Britain was that of a motorcycle courier, a job that he held for ten years dodging crazy city drivers and roundabouts, a job that he was able to accumulate 75,000 miles per year, you read it right, miles. I think it would be safe to say that he has logged more than one million miles in his lifetime. To put that into perspective, that’s more than 1.6 million kilometres or about 267 rides from Halifax to Vancouver.

His intent is to travel across Canada to Alaska, zigzag his way through the States and then to Mexico. Through Central and South America to Tierra del Fuego, Argentina, the very southern tip of the continent. He will then catch a boat to South Africa, after which he will make his way back to Ireland. His travels in early August found him on our doorstep in Barrie, Ontario. From there he was heading west.

We will try to keep in touch with Paddy as he travels, so log onto our website, and we will keep it updated when we hear from him.

Regardless of the length of your riding season, enjoy it and make the most of it. I know my summer of 2008 is the best yet and while it could always be longer, I will accept it for what it is and take advantage of all it has to offer. Maybe I’ll see you on my travels. MMM 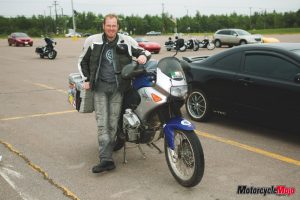