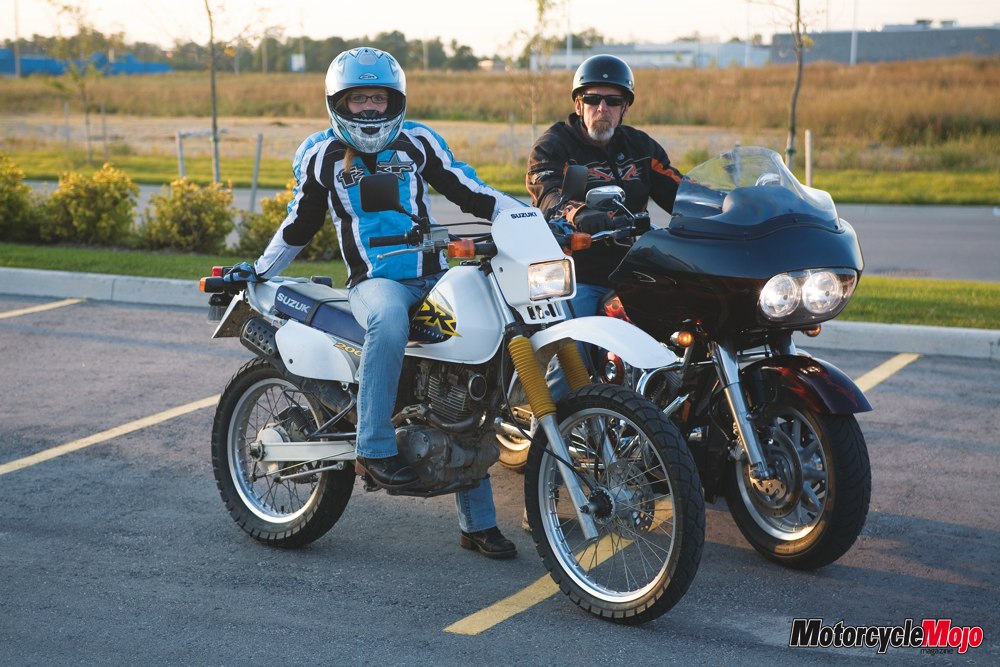 There was a time in Mojo history when we used to regularly insert a photo of our daughter, Emily, in the magazine. We were approached by many readers at bike shows telling us they would scour through the pages of Mojo looking for Emily’s picture, as if it were a ‘Where’s Waldo’ book. I’m not sure if we stopped inserting it somewhere along the line at her request, or the novelty just kind of wore off.

From those early days, some of you may recall that Emily has been riding trail bikes since she was seven or eight-years-old. Her first time on a bike was at Canadian Motorcycle Training Services on a small semi-automatic. Her first wipeout consisted of her falling off of the bike, and it continuing its wobbly collision course with a parked car some 20-feet away. Luckily it only hit the tire and no damage was done. Even though she was young, she understood, or thought she understood, that the bike kept going without her on it because it was a semi-automatic. Fair reasoning, for if it had a clutch, it would have stalled and not continued on its path to have Michelin imprinted on the side of it. She vowed after that fateful crash never to ride another clutchless motorcycle, and she didn’t.

After a few more lessons from Clinton Smout (life experience editor in Mojo) at Canadian Motorcycle Training Services, we found the perfect bike for her, a 1979 Yamaha GT80. A popular bike in its day, and one many of you had when you were kids. After many miles around the house and a few fields, the bike sported a custom paint job by ‘Larry Did It’. After entering it in a few bike shows, (which garnered Emily some trophies and even cash prizes), she put a few more miles on it before she outgrew it and eventually retired it. Her GT80 still has a place in the garage and Emily vows never to sell it. Don’t you wish you still had your first bike?

Emily is on her fourth bike now, the last two of which she bought with her own money. She has been working at Clinton’s off-road riding school for the last four years, starting with various duties and has worked her way up to junior instructor.

I was hanging out at the riding school one Sunday and she needed a sweep. I happily volunteered and took my place at the back of the small group ready to pick up any stragglers and get them going again. One of her students was a man, probably late forties and his first time on a motorcycle. He was riding remarkably well and keeping up with the group, I’d like to think that her training helped his riding proficiency. At one point Emily stopped, got off her bike and told her students about the deep ruts that had washed out on the upcoming downhill and made sure everyone understood how to tackle this element of bush riding before she got back on her bike and proceeded. She was so professional about the way she handled that. I was so proud of her.

Then Emily turned sixteen. Immediately after school on the day of her birthday she went to the license office to write her M1 and G1. In Ontario, our graduated licensing system uses an M1 (motorcycle) or G1 (car) for your entry into taking a vehicle on the street, the next step is an M2 and G2, and after the prescribed amount of time, an M2 Exit or a G2 Exit. If you pass your respective class, you have a full license.

Getting my motorcycle license some 32 years ago was a joke compared to today’s process. There were no training schools that I knew of, not in Owen Sound anyway. After receiving my beginner’s license I found out it would be necessary to travel to Wiarton for the road test since the next one in Owen Sound would happen after my beginner’s had expired. The lady testing me walked outside with me, pointed to our right and said, “go down this street and turn right. Turn right at the next intersection, then right again and make another right to come back here”, as she was now pointing at the other end of the block from the office. She saw me take two right hand corners, and I suppose the simple fact that I made it back in one piece was promising. She directed me in the back parking lot and asked me to look straight ahead and as she named the controls on the switchgear, I was to activate said switch without looking at it. Honestly, I don’t think I even had to weave in and out of pylons, in fact, I don’t remember any pylons during the whole test. That was it, I had my license.

Emily can handle an off-road bike as if it is a part of her, and I sometimes have a hard time keeping up with her in the bush. I have no doubts she will handle a street bike just as well since using all the controls are so natural to her, except for signals, of course.

While I am all for graduated licensing, I’m sure the teenagers don’t like it and I’m glad they didn’t have it when I got my licenses. But things have changed, I’m a father now looking out for his daughter and there are a lot more cars on the road these days. Although she has studied the driver training manuals and passed her M1 and G1, I am concerned for her getting into traffic with no road experience. Just as I’m sure my mother was when I got my first street motorcycle.

In saying this, I do have a bit of a problem with the way the Ontario licensing system works, especially for motorcycles. A person can go into a license office and answer 40 multiple-choice questions. If you pass the test, you are allowed on the street to play Russian Roulette with cars. No training, no run-down of what the motorcycle’s controls are, nobody to even ask you if you have ever been on a motorcycle before. That just doesn’t seem right. At least with a G1, you have a licensed driver coaching you for the first year.

Only two weeks after getting her M1, Emily attended the M2 course at Humber College, her M1 would have expired in the middle of winter as it is only good for 60-90 days. At least in an M2 course you get an evening of classroom training and then two full days of parking lot training on supplied bikes. Call me crazy, but shouldn’t this training be mandatory before a new rider is let loose on the road after taking only a simple written test?

Emily has done her fair share of motorcycle travel on the back of my bike. After the last big trip we did together, around Quebec’s Gaspe Peninsula, through New Brunswick to Cape Breton and back home to Central Ontario, she was so bored that she vowed never to travel with us again unless she is on her own bike.

Knowing she couldn’t wait to ride, I fixed up a Suzuki enduro of mine and had it certified for the street, so now she has a bike, so-to-speak. I was so proud to be riding with my daughter on her sixteenth birthday. We rode together for about 80 km on country roads. She on her bike, and me on mine. A big grin would cross my face when we would pass another rider, I would wave as normal and as I looked in my mirror I caught a glimpse of her also waving. She’s one of us.

A new set of memories are just beginning, and I’ll never forget the text message that she sent me the second she found out she passed her M1 – ‘Let’s Ride!’