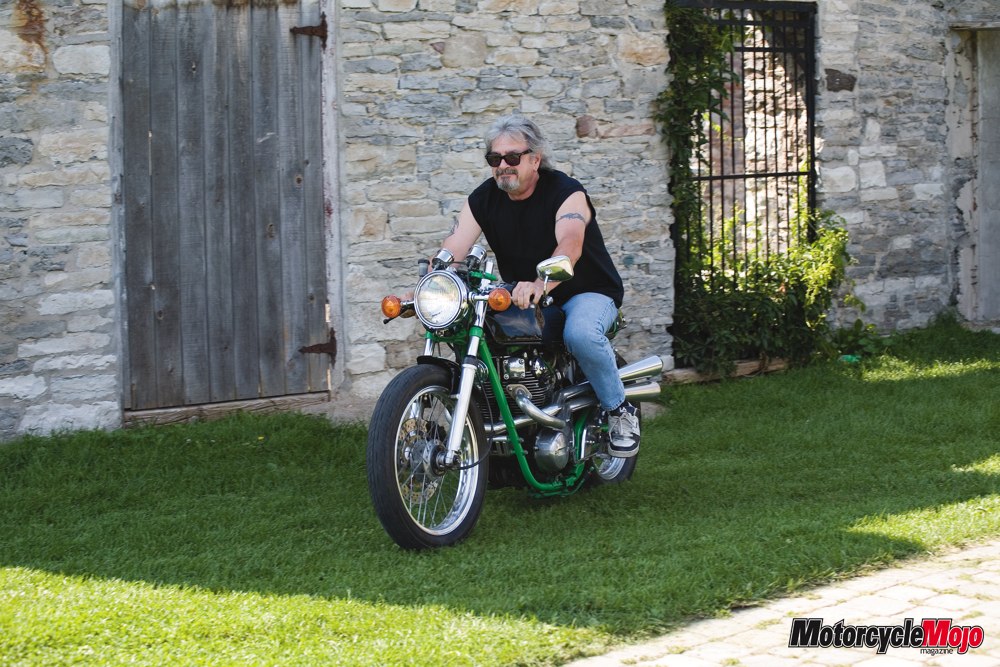 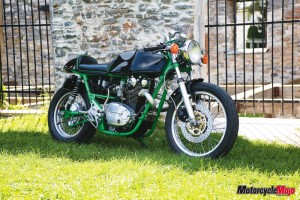 Hal Reid, the owner of this beautiful home-built cafe racer, admits that over the years he cannot remember how many XS650s he has owned, but he knows it’s in the dozens. He bought his first XS650 in 1972 and says, “No matter what I did with it, I couldn’t keep up to other riders”. Frustrated with the power, or lack thereof, he made a few modifications here and there, but at the time they were unfortunately governed by cash flow. “Call it mid-life crisis, this is the bike I couldn’t afford in the earlier days,” Hal says with a chuckle. With that many XSs under his belt, it’s obvious he’s dabbled with many of them, but this is the first one he went all out on. When he first began this build, he thought of an old school bobber style bike, but soon came to his senses. “I never wanted a bobber before, why would I want one now, so I settled on the cafe racer style.”

He began visiting internet forums, primarily www.650motorcycles.com and found a wealth of information about ‘hopping-up’ an XS650. Stiffening the fork and the frame, using bearings instead of bushings in the swingarm, better head bearings instead of the old ball bearings and lightening up the bike in general, were just a few of the major improvements he did to develop a better handling bike.

Hal claims to be pretty handy with a wrench and did most of the work himself, but admits he isn’t an engine builder. While Hal’s engine builder was adding metal in the shape of high performance parts, Hal was removing metal. His engine builder marked inside the head where Hal should take out metal with a Dremel tool for enhanced engine breathing. Meanwhile, the engine received a complete overhaul from top to bottom including a Wiseco 763 cc big-bore kit and 38 mm Mikuni carbs. Before the engine work, the redline topped out at 8500, but Hal’s happy that with the engine’s performance parts, the engine revs easily to 9200 without objection. “The only thing that wasn’t changed is the cam. I find the stock cam makes the engine run better and it seems to have more torque.”

“The gas tank is from a Suzuki GS400 or 450 I think, and the painted rear tail section is the rear portion of an original XS650 gas tank. I wrecked two tanks before getting that right.” Hal continues, “The first year I rode the bike with a rattle can paint job to work out the bugs and then tore the bike down for polishing and final paint. I stole the paint scheme from the 1987 Moto Guzzi Lemans race colours, I just happened to like the combination.” 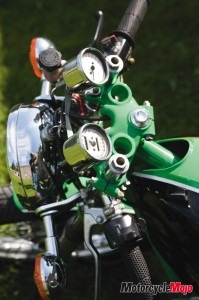 Hal wanted to leave the looks of his cafe racer as period as possible, which is why he quickly discarded the thoughts of having billet triple trees, even though he could shave off a few pounds by doing so. He did give up some of the traditional look up front and because he thinks that stopping is important, he decided to stick with the disc brake.

In the beginning of this project, Hal had a lofty goal of hoping to lose 80 pounds from the original 483 pound bike, but admits that he came nowhere close to that number, saying that he was able to manage a weight reduction of 45 to 50 pounds. Still, not bad.

He hasn’t had the opportunity to run the bike on a dyno yet, but with the help of others on the forum and by doing some math, he estimates the horsepower to be around 65-70. That’s a good jump from the original 48 horsepower the bike had before the engine work.

Hal is the first to admit that the newer bikes are far faster, but his little cafe racer scoots down the road pretty good for an old 650. This bike is a far cry from his first 1972 XS650 and with a reduction in weight and an increase in horsepower, Hal doesn’t find it as hard to keep up with his buddies anymore. MMM