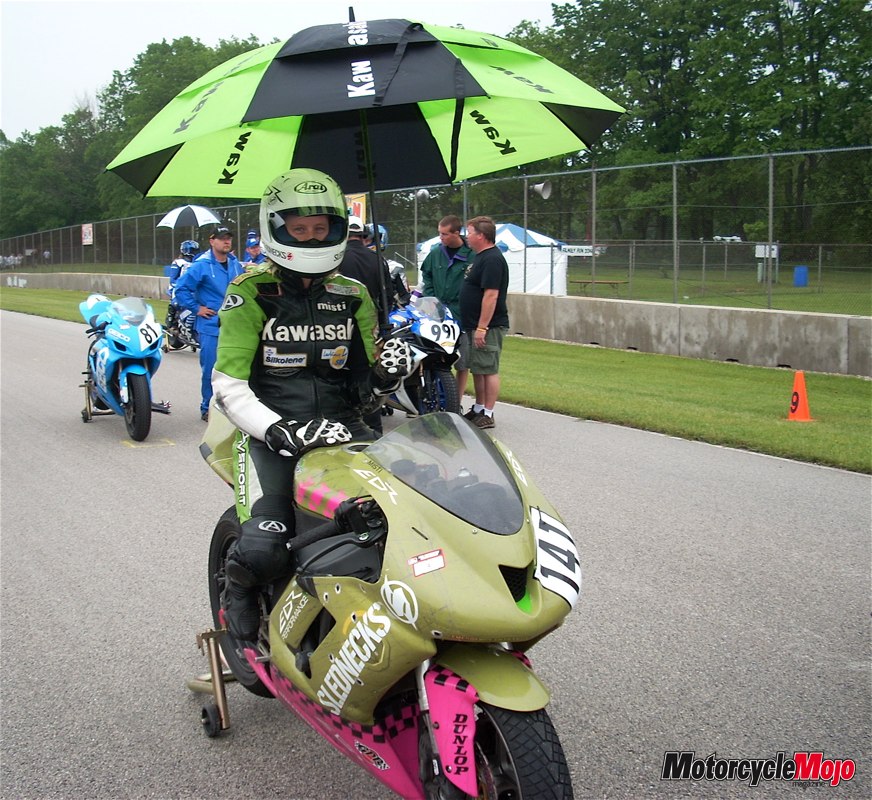 With the start of 2009 now in full swing I spent some time pondering 2008, which was in every way an epic year. With racing a full AMA season, coaching nearly full time with the California Superbike School, travelling across the United States, sailing in the Caribbean, getting engaged, married and pregnant, I was surprised to find that some of the fondest memories not only came from the perfect wedding and the amazing sailing adventure, but from the rainiest, stormiest, most chaotic, hectic and tiring race weekend and road trip of the season.

Looking back, I realize that it is often the rides, road trips, adventures, and vacations teeming with disaster, peril, stress, bad weather and plan changes that always seem to leave the fondest memories and the most amazing stories.

There is something to be learned from this, and that is to try and appreciate the moments in the moment, regardless of how crappy or frustrating they may seem at the time. “It is what it is.”

It all started in Salt Lake City, Utah, on Sunday June 1st around 8:00 p.m. My team mate, Josh Galster and I had just finished racing at Miller Motorsports Park and were already exhausted. We packed up the Ford Cargo Van and trailer with all our race gear and drove to Walmart along with our friend and cameraman from Slednecks, Jason Moriarty. We were preparing for a 25-plus hour drive across the country, which would begin early the next morning and we needed some supplies.

With three passengers set to travel in a two passenger cargo van, we needed a centre chair and with burned out taillights on the trailer we needed a quick fix. We also needed snacks. A cheap fold up office chair made an extremely uncomfortable middle seat, beef jerky, pretzels, sunflower seeds, and granola bars made good snacks. The improvised taillights came from some Velcro, push battery lights and red vinyl tape. We just had to remember to push them on before it got dark.

At 6 a.m. we hit the road, Josh driving, me in the middle “seat” and Jason with camera ready in the passenger seat, off on our road trip adventure. Our destination, Elkhart Lake Wisconsin area, a little town called Sheboygan for a race weekend at the Road America Race Track.

Twenty-five hours of driving straight through, with all three of us taking turns driving and crashing out in the back of the van on the air mattress.

The drive was riddled with torrential downpours, tornado and wind warnings, and thunder and lightning demonstrations that were absolutely incredible. At one point while driving white knuckled, I was listening to the radio, or trying too, at least while it blared every few minutes, “beep beep beep, warning, warning, warning, this is an extreme weather warning for the following areas…”

We pulled into Sheboygan, Wisconsin, around noon on Tuesday morning after a LONG drive, tired but giddy. To say that it was raining was an understatement, as the downpour continued and easily kicked butt on the hardest rains I have ever seen in Vancouver, BC. We checked into our hotel room and tried to get some rest.

Wednesday morning we were up early and off to the track. We waited in line with dozens of other race transport trailers, our little van looking miniature against all the factory semi trucks. None of the top riders were there, just their crews sent to do the dirty work. Yet there were Josh and I, with Jason filming, loading and unloading the trailer, setting up our meager pits in the rain and the mud after hours of driving and little sleep. We had no crew of our own, little support, and to top it all

off, neither of us had ever ridden the track before.

Jason agreed to come on the road with us because he was filming a documentary on Josh and I as privateer racers against factory riders in the AMA. He wanted to get the real action on what we had to go through, in between races and getting to the events, as well as the “at the track” racing action.

At 9 a.m. the following day, when our first practice session was supposed to start, you couldn’t even see the track for the fog and the mist. The officials finally opened the track after the fog cleared and Josh and I headed out to ride the circuit for the first time.

The riding was slippery and confusing as we tried to navigate the new track, made more difficult by the seasoned racers flying by us. We started making our way around getting faster and getting more comfortable, careful to use all of our tricks for riding in wet, slippery conditions. Apparently, I didn’t execute all my wet weather techniques carefully enough, as I crashed on the last corner and slid into the mud, cutting my practice time drastically.

Friday’s practice session was dry and it was nice to get a feel for the track, though the speeds went way up and I was still far from the times needed for qualifying. There were black clouds in the distance and the threat of rain hung heavy.

Saturday morning was also dry with the same dark clouds hovering. We only had 20 minutes to qualify and I needed some fast times so, with my head down, I rode as hard as I could. At the 15-minute mark the red flag came out and the session was stopped due to a crashed bike lying in the track. Josh and I were ecstatic to find out that we had both made the qualifying times and were going to get to race the next day.

However, the AMA officials decided to cancel the remainder of the session and after some deliberation, disregarded the session entirely and decided that Sunday morning’s practice would instead be used as qualifying.

I was slightly frustrated. I worked my butt off running my fastest laps ever right off the bat. I qualified, Josh qualified, and then they tell us we have to do it all over again and that it didn’t really count? It was unfair to us privateer riders that don’t really have the budget to suddenly have to spring for another set of tires for a “new” qualifying session. GRRRRRRRRR. But what could we do? “SHEBOYGAN!”

Instead of leaving for the day we decided to stay and watch our friend, Jason Farrel race and help his crew if they needed it. Starting in 24th, Jason got a great start and was in the mix of the race when coming up to turn one on the second lap, he was taken out when two other riders collided, and experienced a massive crash in that turn. Bruised and battered with a sore ankle and shredded leathers, Jason attended to the two other injured riders until the medics arrived and then ran all the way from turn one back to the hot pits shouting at us to get his back–up Kawasaki ZX6R ready. It was the funniest thing I had ever seen. A rider with dirt everywhere, leathers flapping open and running with a limp, screaming at us for his other bike.

After grabbing a new helmet and giving a quick check for any signs of a concussion, I wrapped his leathers in duct tape, handed him his transponder, which he stuffed inside his leathers, and off he went. Despite the hovering black clouds, the track was still dry and he was left no choice but to head to the back of the grid with the full rain tires that were currently mounted on his backup bike.

Myself, Josh, and his crew, Keith, Jaegar, and Rebecca did the rain dance while the race was re–started. It worked, and on lap two another red flag was flown, this time due to rain on the back straight. The skies opened up.

Re–starting the now wet race, for the third time, Farrell got a great start from the back of the grid and by the second lap was already in 12th place. We were wild with excitement on pit wall. Each lap he was able to pick off another rider and come the last lap, he was safely in 7th place. Ecstatic, he crossed the line, thumbs up and waving at all of us. Arriving at the hot pits after his cool down lap, Farrell did a celebration stoppie and rear slide while hootin’ and hollerin’. It was an AWESOME way to end the otherwise crazy day. “SHEBOYGAN!!! WOOHOOOO!”

On Sunday morning, we arrived back at the soggy and stormy Road America track and the morning’s practice–turned–qualifying–session took place in heavy pouring rain. Both Josh and I came into the pits only to find out that neither of us had made the 110% cut-off time. In fact, nearly 15 riders didn’t make the required qualifying times.

“That sucks.” said a soggy Josh, as we stood dejected under our dripping canopy. All was not lost. As we started packing up our gear to leave for the day, we found out that the AMA was actually going to allow everyone to race.

It was so confusing that we just threw up our hands and said, “whatever.” You qualified. Nope, just kidding you didn’t really. Try again tomorrow. Oh, you didn’t qualify. Just kidding, you actually did, you can race today.

Our race took place at 2:00 p.m. on a wet but rapidly drying track. Josh started in 28th position and I in 31st. After two laps, our race was red flagged because of a crash. Typical.

Without crew to help us change tires, make suspension changes or add gas, we went back out on the now drying track on full rain tires with our wet race set-ups. Josh got a good start and moved his way up through the pack to as high as 15th place. He persisted and was aiming for his first top 15 finish when his fuel light came on early and he had to try to conserve. On the final lap the bike began sputtering and bogging and he barely made it up the final hill across start/ finish. Four riders got by him right at the end and he finished 19th place. “I was bummed out for sure, but what can you do,” said Josh “Next time we won’t make that same mistake, it kind of fit in with the theme of the weekend.”

I also got a decent start and even after a violent slide out of turn five, was able to hang with a few riders and was only passed by two guys. It was a fairly uneventful race but I finished 26th.

I was happy and it was a great way to end a crazy weekend. It was so much fun.

There were so many other moments during that weekend that fill me up with warm fuzzies and that I can look back at now with such fond memories. The times spent standing in the rain, in full leathers, drinking hot chocolate and laughing with new friends. Seeing the little kids in colourful rain suits with rubber boots and smiles on their faces as they met the riders. The time Jason was reprimanded by a track worker for doing donuts in a rented golf cart and we were then escorted back to the office. The black swirly clouds, the rain, the cold, the puddles, the unloading and loading of the van and trailer, the tornado warnings and, of course, the riding.

We put up with it all, we endured the stress, the tiredness, the cost and the cold, for one simple reason, the love of the ride. We also put up with it all so we can look back on crazy weekends like this with the best memories in the world. MMM

Misti Hurst is a motorcycle racer, an instructor and a freelance writer.