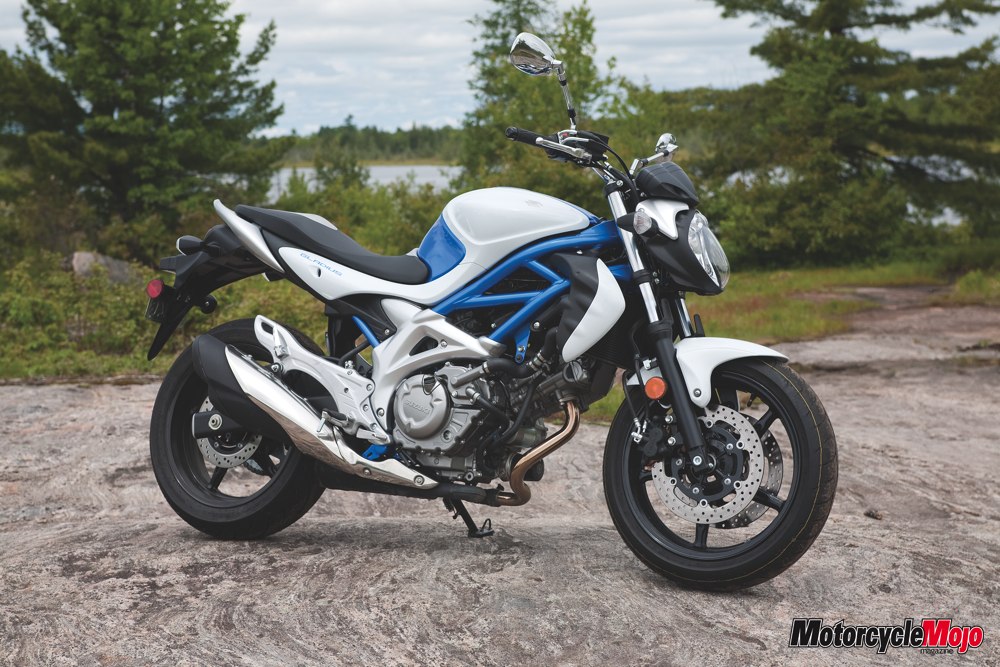 Sometimes you just know by sitting on a bike that it will be well received by enthusiasts and a great addition to the product line for the manufacturer. Suzuki’s new SFV650 Gladius is one of those bikes. From the outstanding user-friendly engine, the excellent ergonomics and the stylish design, this bike has a lot to offer the motorcycle consumer.

I’m going to begin by gushing about the liquid-cooled fuel-injected 90-degree DOHC V-twin power plant, the same engine that drives the SV650 and the V-Strom 650. This engine has been around for a decade now and with the exception of fuel injection, has had very little change, and for good reason. My first experience with the Suzuki’s 645 cc V-twin dual-plug head was on the V-Strom while on a 14-day ride from Edmonton, Alberta to Anchorage, Alaska and back in 2008. Being a fan of the V-twin design, regardless of who manufactures it, I was seriously impressed with my time on the V-Strom, and riding the Gladius further cemented my strong feelings for this bulletproof engine.

The dynamic 650 V-twin in the Gladius has been retuned slightly from the SV650—thanks to a modified camshaft profile, exhaust system and engine control system—to deliver more low and midrange torque, making for an easy to use engine with an extremely broad power band. Unfortunately, horsepower and torque specs are not available from Suzuki. Even at 80 km/h in sixth gear, the engine responds nicely to rolling on the throttle. In a very informal time test—a wristwatch with a second hand—it consistently took only two or three seconds to accelerate from 80 km/h (3,500 rpm) to 100 km/h (4,500 rpm) in top gear on level ground. Very impressive for any engine. This made easy work of passing a car without a downshift, although a downshift makes the experience all that more fun. Get the engine up into the 6,500-7,000 rpm range and acceleration is quite brisk up to the redline of 10,500. Even though the engine does not employ balance shafts, the engine is consistently smooth and without vibration throughout the whole rev range.

The engine started easily when cold and never once coughed, even when taking off without warming up. Once under way, the 6-speed transmission shifted as smoothly as a hot knife through warm butter, and finding neutral was always easy. Downshifting at proper speeds was just as easy, but I did find it hard to downshift through the range of gears when going slow. Clutch lever pull was effortless. The friction point and the broad range of clutch engagement makes this one of the easiest-to-use clutches I have ever tried. Final drive to the cast alloy five-spoke 17-inch rear wheel is via chain.

Both contact patches are supplied by commonly sized 17-inch Dunlop rubber; the front has a 120/70 mounted and the rear uses a 160/60 section tire. Two-piston calipers clamp the dual 290 mm discs up front while the rear 240 mm disc has a single-piston caliper on duty. Hauling the bike down from speed is quick and efficient as the front brakes are intuitive with a good feel and stop the Gladius in very short order while the rear brake does slow the bike down, but tends to lock up easily. The front brake lever is adjustable for a variety of hand sizes–a nice touch for an entry-level bike–but the clutch lever is not adjustable.

The short wheelbase of 144.5 cm (56.9 in) and a rake of 25° help the Gladius manoeuvre in close confines and glide through the tightest of corners with a slight push on the handlebar. Suzuki’s new contender weighs in at 202 kg (446 lbs) with all fluids and ready to ride, making it easy to toss around in the twisties when the mood strikes.

Front and rear suspensions offer adjustment in the spring preload departments only. The rear has seven settings and gives up 130 mm (5.11 in) of movement while the front provides 125 mm (4.9 in) of travel. Over regular road imperfections the suspension works fine, but throw in some broken pavement or a lowered manhole cover and you might want to lift your posterior off of the seat a tad.

The ergonomics of the seat to handgrip to foot peg placement is excellent with your feet under your butt, your arms in a relaxed reach to the bars and your back straight. Your derrière might want a break before it’s time to fill up the gas tank as the padding is quite thin on the stock seat making for an uncomfortable ride after a couple of hours. There is an optional seat available with another 20 mm of foam—it’s being marketed toward taller riders–and I think the extra foam would be a bonus in the comfort department for any rider providing you can still touch the ground. Standard seat height is a reasonable 78.5 cm (30.9 in), but might be a bit too tall for those with shorter inseams.

I was able to attain a very respectable 4.18 L/100 km (67.61 mpg) in real-life riding over a few hours one afternoon. On the Gladius’ 14.5-litre tank, that should equate to just under 350 km per tank. My low fuel light came on at around 250 km, at which point the trip meter/odometer begins to count up from zero.

Styling of the Gladius is contemporary with smooth flowing lines throughout, and pleasing to the eye as evident from the bystanders that approach it when parked or watched intrigued as it cruised by. The 90° V-twin engine with the front cylinder nicely poking out of the trellis frame and styled headlight might look a little Ducati-like. The designers of the Gladius seem to be going for a naked bike approach, but the frame’s lower extremities are covered up by an unfortunate piece of molded plastic. I removed the plastic piece covering the lower frame to see exactly what it was hiding, and personally, if I owned a Gladius, that plastic would have to go so the whole frame is exposed. If you are going to go naked, you might as well go all the way.

A small feature on the Gladius that many bikes, particularly European bikes, don’t employ is a kickstand foot which is large enough to negate the need to carry around a kickstand puck or a flattened pop can. While it is a small and insignificant item to note, anyone who has had a bike end up on its side because it sank into hot asphalt will appreciate this small detail.

The bike’s flowing lines continue through the futuristic-looking muffler. If there is one bone of contention to onlookers, I think it’s the muffler, as I did hear a few under-the-breath comments about it. The sound from it is quite pleasing though, kind of a muffled throaty rumble, most notable on downshifts. I think that most owners will be happy with the sound emanating from the muffler on this bike, as will their neighbours.

The instrument cluster has an analogue tach bracketed by idiot lights on the left and a digital speedometer to the right. Within the LCD speedometer display are two trip meters, odometer, clock and reserve fuel counter. In the lower right of the tach is an LCD showing which gear the transmission is in. Very handy, not only for the beginner, but because the bike will accelerate in any gear, a rider may forget which gear is selected. Nicely laid out, the whole display is easy to read at a quick glance.

The name Gladius is derived from the name of the sword that a Roman Gladiator used in battle. The name, I believe does better in Europe but loses something on this side of the Atlantic. Not to worry, if the name is stopping you from purchasing one of these fine motorcycles, only two occurrences appear on the bike and they are on decals that have been applied on top of the clearcoat and easily removed so you won’t have to worry about your friends calling your bike Gladys, or any other name they may conjure up.

All in all, this bike is excellent value for the asking price of $9,199 and is an all-round great bike with an awesome engine. The Gladius is particularly user-friendly and non-intimidating in so many ways, offers something for everyone, and will easily please the beginner rider or the experienced enthusiast.

Generally, when I get a bike for review I have it for a week or so to get a good feel for it in a variety of real-life riding scenarios. In the case of the Gladius, whenever the bike wasn’t in my possession it seemed to disappear and so did Gwen. I’ve since heard rumours of an SFV650 gracing our garage on a more permanent basis.

Go to www.suzuki.ca or your Suzuki dealer for more information.