Home / Issues / August/September 2009 / The Social Side of Riding 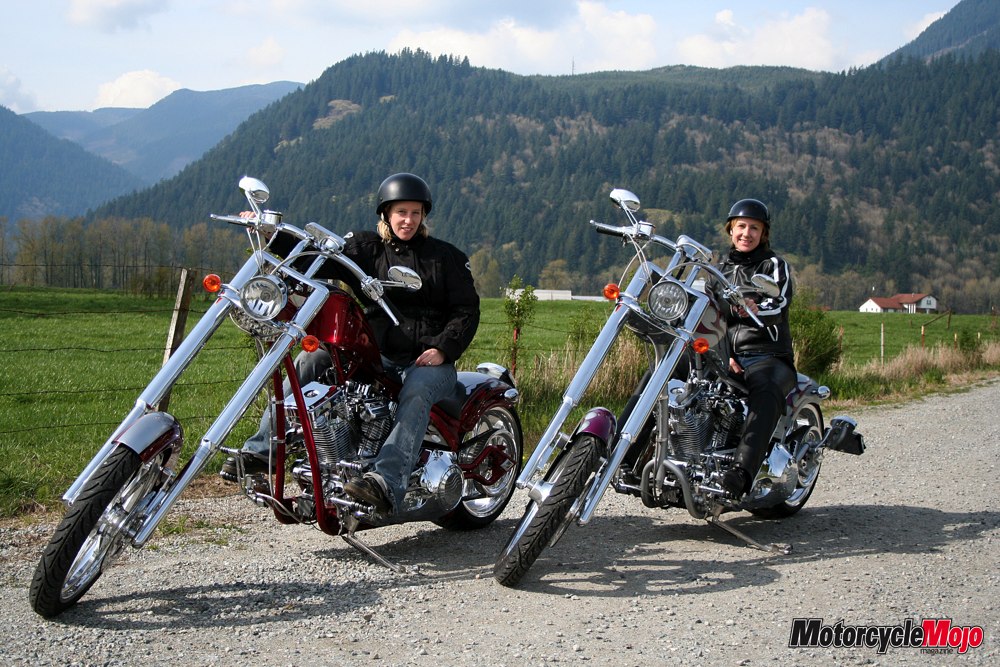 I love it when people ask me how my husband and I met. “We crashed into each other,” I reply with a smile, “literally.” And it is true. John and I met at Mission Raceway in 2003 during a Westwood Motorcycle Racing Club race weekend. He was on a hopped up Honda 450 dirtbike with roadracing wheels while I was on a stock SV 650, and we were both racing in the Lightweight Superbike class. I didn’t know who he was at the time, all I knew was that during the race there was this annoying guy on a wickedly fast dirtbike in front of me that could pull away in a straight line, hitting a much faster top speed than my bike would go, but who would go super slow in and through the corners. It was so frustrating, and for several laps I was trying my hardest to get past him, even shouting in my helmet, “get out of the way!”

On the corner before the straightaway, on about lap four or five, he took a wide line and I tried to cut to the inside to make the pass, but he moved to the inside suddenly and his back wheel hit my front. I went down hard. Shortly after sliding through the gravel I was back up on my feet, shaking my fists, yelling obscenities, and throwing my gloves at the guy that just took me out.

John, the annoying guy on the dirtbike, felt the impact of our bikes hitting and realized on the next lap that it was the “chick racer” that had gone down. At the end of the race he approached me, introduced himself and apologized for our “accident.” He offered to help pay for the damages on my bike but I refused, saying it was all “part of racing.” He persisted and offered to at least paint my bike as a way of reducing repair costs and to this I agreed. Little did I know that four years later we would hook up and eventually get married.

The story of how we met is a good one, and it’s fun for us to look back and remember that fateful day. John insists that it was my fault because I hit him from behind, while I still maintain that his sloppy riding took me out. We even incorporated the details of our smashing into each other into our “press release” style wedding invitations and into our checkered flag, black and white, race themed wedding.

But what both of us like to remember most from that incident, and from our many days of riding, racing, and being around motorcycles, is how nice, friendly, interesting, and genuine other riders are. We recently went back to Mission raceway, this time as spectators to check out the races, see the track improvements, reminisce about our meeting place, and visit with old friends. There we got talking about the sport of motorcycling and the importance, and fun, of the social side of the ride.

When we think or talk about riding motorcycles, most of us focus on the actual riding, riding techniques, the wind, the sunshine, the smell of the outdoors, the feeling of freedom, the adventure, the scenery, the destination, the art of the ride. What a lot of us fail to notice, or really appreciate, is the social aspect, and the friends that motorcycles bring into our lives.

I have met so many amazing people through riding and have maintained friendships with riders, racers, industry workers, mechanics, adventurers etc, in different cities across Canada and in different countries throughout the world. When I look at my friends, acquaintances and contacts, I’m amazed at how many of them are a part of my riding network. Without riding, I wouldn’t have met such astounding, diverse and fun people.

It all started in Victoria where I first learned to ride. A bunch of us formed a group called the Vroom Crew that met every few days for some amazing rides around the island that always included stops on the beach, coffee or lunch breaks, and weekend parties at various houses. Rarely a day went by where some of us wouldn’t hook up for a ride or a get together, and nine years later we still keep in touch.

Through the Vroom Crew I met another bunch of riders that called themselves the Moto Dudes, older riders that had members throughout Canada, the USA and other parts of the world. With that group we went on long, cross border rides, including an annual Easter ride where we went from Victoria to Eureka California and back in under four days, just to be able to say, “we were in California over the weekend.” The network of amazing people in the Vroom Crew and the Moto Dudes meant that we had (and still have) places to stay, throughout BC and the USA, as well as people to ride with regardless of our destination, and regardless of what kind of machine we ride. 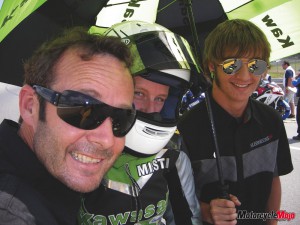 During one eventful ride through Washington State, we met another group of riders with BC plates in the unique Western style town of Winthrop. The group called themselves VROM (Vancouver Riders of Motorcycles) and suddenly we had this whole other network of riders to connect with. Through them I met the late Julia Sit, who started the Hot Chicks group of female riders in Vancouver, who to this day, continue to work hard to promote safe riding for women, and to organize various charity and fundraising rides and gatherings in the lower mainland.

At the track, fellow racers are some of the nicest, friendliest and most accommodating people I have ever met. Never before in a sport have I seen such charity and helpfulness in people that are being competitive against each other. If someone breaks a part on his or her bike, you can guarantee that a fellow racer will step up to offer a spare, or help fix it. I even had a fellow racer offer me the use of his spare bike when my bike had a mechanical failure so that I could still race against him. If a rider is hurt, others will step in to help, make donations towards recovery funds and make visits to the hospital. Plus, at the end of a race weekend there are always beers, BBQs and laughter to finish the day.

Even online there is a community of riders and motorcycle enthusiasts that are fun to connect with. I visit several different riding forums, including ones for specific brands of motorcycles that I don’t even have, and yet, I’m always welcomed and people are always interested in what I have to say. I specifically enjoy starting threads on riding techniques and how those techniques can be applied to either riding on a track, on the street or in the dirt, or how you can better your riding abilities. When the weather sucks or when you just can’t make it out for a ride, you can still connect with other riders around the world and talk about your passion. I’ve even had people that I’ve met online through the forums offer their services as pit helpers for races that were to take place in their home cities, or at races that they were planning on attending. Motorcycle riders really are nice people.

When you are a rider, it is like all other riders are family, regardless of what kind of bike you ride. I remember the first time I passed a fellow rider going in the opposite direction as me and he waved. I thought to myself, “do I know that guy?” before I soon realized that most riders will wave to other motorcyclists on the road. It is a camaraderie that is hard to find elsewhere and something that I enjoy reflecting upon, and appreciate.

After I had the idea to write an article about the social side of riding, John and I were out for a walk reminiscing about some of our favourite riding memories and talking about how motorcycles have brought us together with some pretty amazing people. We also mentioned how riding and bikes are like icebreakers to being able to talk to anyone, whether or not you see them on the street, at a bike show, in a coffee shop or even in another country in the world. There is always something common to strike up a conversation about. Just then, a woman walking her dog stopped, looked at John and asked him what kind of bike he rode. We both looked a little confused until she pointed to the shirt John was wearing which happened to be his Motorcycle Mojo “So many roads, so little time” shirt.

Next thing you know, we were chatting about motorcycles, rides that she and her husband had enjoyed in the past and were planning in the future, and we introduced her to Motorcycle Mojo Magazine. The ice was broken, and a good conversation was had before she continued on in search of a shop where she could pick up a copy of Motorcycle Mojo as a gift to her husband. As she left she said, “My kids think I’m crazy because I talk to strangers on the street about their bikes and about riding, but I don’t care. I like meeting people, and I like talking to everyone that shares the same passion as my husband and I!”

Enjoy the ride, and the people riding along side you.

Misti Hurst is a motorcycle racer, an instructor and a freelance writer. Visit her website www.mistihurst.com