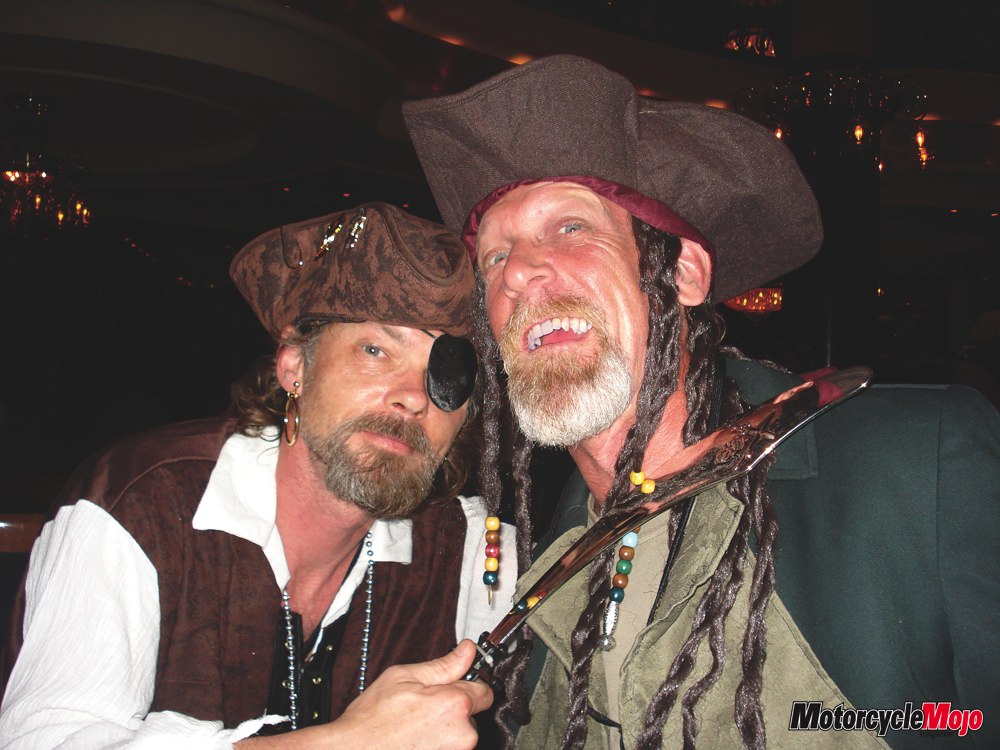 When I was kid, I always thought the coolest job ever was to be a pirate. It sounded so romantic sailing the seven seas, playing with swords and loading black powder into anything with a flint and a barrel, swinging on ropes, all while drinking rum and pillaging the locals in the warm Caribbean islands. It sounded so adventurous at a time when I wasn’t any taller than the handlebars of a Vincent Black Prince. I soon realized that traveling by ship, never having ice cream or pizza and getting scurvy wasn’t very romantic after all.

This summer, like last summer, I’ve been fortunate enough to have the opportunity to travel over much of this great land. Fortunately this year, most of my travels have been by motorcycle. Occasionally due to time constraints, some of my excursions are by plane but with friends and acquaintances across Canada I am usually able to borrow a bike from someone.

In late June we flew to Moncton, NB to attend Atlanticade. I consider myself lucky to have had three different bikes at my disposal during that event.

In late July, Gwen and I rode our own bikes to Sydney, NS to attend the inaugural Bike Fest—Thunder in the Highlands, followed by one of our favourite events, The Dutch Mason Blues Festival and Motorcycle Lifestyle Show in Truro.

Arriving home, late on a Tuesday night in August, I dragged myself into work on Wednesday to tie up some loose ends, grab some work to do on the plane and then rushed home to do some laundry so I would be ready for my next journey the following day. Very early Thursday morning I was headed via Air Canada to Calgary for the Canadian National HOG Rally. While there I was able to get some riding in on a 2010 CVO Street Glide as well as a bike supplied by Kane’s Harley-Davidson—thanks Mick.

As I write this column at the end of August, I am heading out again, this time a solo ride on my own bike. The Wharf Rat Rally in Digby, NS is my destination. When the Wharf Rat Rally ends I will be heading to Boston for a photo shoot and an interview before making my way back home sometime in the middle of September.

When I tell other riders of my schedule, most say, ‘must be nice’ or, ‘where can I get a job like that.’ There are a knowing few that shake their head at how crazy my schedule is, followed by something like, ‘glad its not me.’

Now don’t get me wrong, I’m neither bragging nor complaining, I love my job and spending time in an industry that I can’t get enough of. I get to meet many interesting people but there are times when those meetings really tug at your heartstrings. One case would be when I met Darlene Cushman (Crossroads, July 09). My schedule does get to be a little overwhelming at times as it seems I work everyday of the year, but that is no different than anyone else that is self-employed.

From the middle of June until the middle of September, I will have been home for about 4-5 weeks. Being on the road is tough on the body and mind and so is getting home trying to play catch up with work. It’s stressful and not so easy on family life either. Emily is so accustomed to me being away most of the past two summers she is actually surprised when I am home.

Winter is a whole other story since most of that is spent in planes or hotel rooms while I traverse the country attending motorcycle shows from coast-to-coast. Anyone who has spent countless hours in planes knows that while it’s a fast, efficient way to travel, it also sucks. Lost luggage, delays due to weather or technical faults, being stuck on the runway for hours because of lightning, getting up at 3 a.m. to head to the airport, or the worst is being squished in your seat because the person beside you technically should have bought two seats.

I hate watching TV and prefer to spend evenings in the garage puttering away. But since I’m home so little it means I’m limited in the amount of time I have to be productive at anything.

By accident I’ve recently caught a couple of episodes of The Thirsty Traveler, a show I had never heard of. The host spends his time traveling around the globe by plane, jeep, camel, bicycle or any other means of transport that will get him to the local brewery or distillery to sample the regional flavour: beer, wine, schnapps, scotch, bourbon, you name it. If it has alcohol in it, this guy will drink it. Sounds like a cool job. Wonder how I get a job like that?

I know from my own experience, while that gig sounds cool, nothing is perfect. I’m sure he has a hangover just about every morning, and is stressed to get to the airport with his crew in a timely manor. Making sure his appointments are lined up at his next destination and that his gear actually arrives when it’s supposed to. I’m sure he samples drinks that would rather make him barf, but instead, he generally smiles and finds something positive to say.

When it comes down to it, traveling by pirate ship, plane or camel might be OK for some but I deem myself lucky that most of my summer travel involves two wheels and a throttle.

And considering the number of friends I’ve met over the years at various destinations, that quite often turns into many late nights and a few cloudy mornings. Not unlike Blackbeard and his grog, or The Thirsty Traveler–Damn I love my job! And I wouldn’t want it any other way.