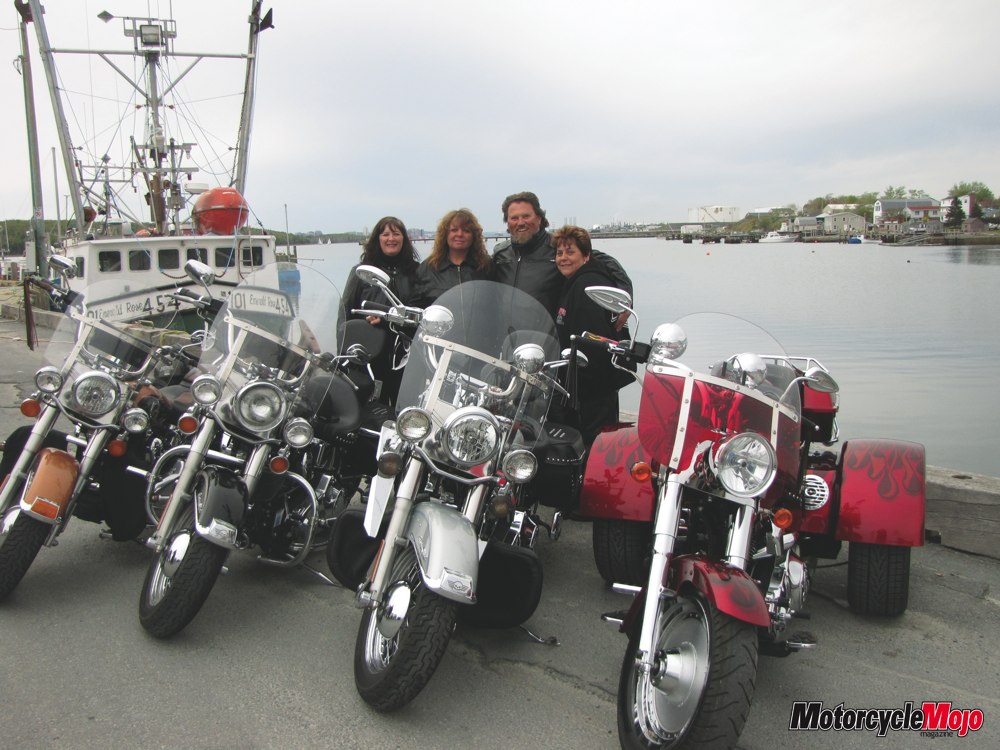 The day is one of those memorable ‘it’s so great to be alive and riding’ days. It’s the kind of day that is comfortably warm, sunny with vibrant blues skies and the pavement is smooth. You pull into your favourite coffee shop after a pleasant day on the black top with all your riding buddies. As you’re stretching out the kinks and limbering up, another friend wanders over from the other side of the parking lot. “Did you hear that there is another biker down?” Instantaneous fear grips you, a sudden knot forms in the pit of your stomach as “Who?” slips from your lips, and your mind tries to process all the bikes in the lot. “You know such and such, rides the blue 1500 cruiser with the hard bags and the ghost flames.” The knot tightens as you realize that is someone you know. “How bad?” you quip. “Bad enough, he is at County General right now. Bike looks like it’s a write-off but he should make a full recovery. Crushed his leg and bent the bike pretty bad. Driver claims he didn’t see him and made a left across traffic.”

It’s a story that we in the riding community hear all too often. A great day ruined in a heartbeat, often through no fault of the riders. Yes, insurance and the courts will sort out the aftermath. But what about the immediate pressing concerns. No one plans to have an accident and most are caught unawares. The financial impact can be immediate and pressing, and often as crippling as the accident. Fortunately in Nova Scotia, thanks to the generosity, foresight and hard work of a group of dedicated volunteers, the aftermath plays out in a much different fashion.

Over a few cups of coffee and some evening rides, a trio of well-known bikers in the Nova Scotia riding community had an idea. ‘What if there was a fund that could step-up and provide immediate short term financial assistance to the downed biker?’ ‘What if there was a formal fund and process to be set up in advance that could react as quickly as the accidents happened?’ ‘Not to replace insurance or government benefits but to help with the immediate costs?’ Pam Vickery, a motorcycle riding instructor and Janice Gould, web mistress of the ever-popular novascotiabikers.com were tired of passing the bucket at riding get-togethers to raise a few bucks. Assisted by Jimi Swinamer, a retired motorcycle police officer who was injured in a devastating on-duty accident, the seeds were planted to grow into what has become the Bikers Down Society of Nova Scotia. Jimi was forced to retire due to the injuries he sustained when a car pulled a U-turn in front of him while on duty, riding his police issued Harley. If a driver does that in front of a police station, it is not hard to figure out why the need for enhanced motorcycle awareness is out there.

As a registered not-for-profit organization, the Bikers Down Society has formalized the process and structure was put in place to help motorcyclists during the traumatic weeks following an accident. Unlike many car accidents, motorcycle accidents tend to be a complex web of emotional, physical and mental carnage that can shake even hardcore riders right to the soles of their riding boots. To the newer rider, the scars may be so deep that they give up the sport all together.

Bikers Down supports awareness campaigns and responsible riding practices. The organization wants to create greater awareness and education about the traps, pitfalls and dangers of the road. It may sound trite, but the best way to avoid an accident is to steer clear of situations where one is likely to occur. But even with all the best intentions, the refrain from car drivers is still too often, “I didn’t even see them”. That phrase is generally the precursor to an accident description where the results are less than positive for a motorcyclist.

If you hold a valid Nova Scotia motorcycle license, have verifiable income loss and have not been provided assistance by Bikers Down in the previous 12-months, then you are well on your way to receiving aid from the fund. The fund does reserve the right to refuse assistance if intoxication or recklessness is involved by the biker, but the police or accident report generally clears this matter up very quickly. There is much more detailed information at www.novascotiabikers.com/bdmission.html.

In fact, the fund worked so quickly that the first recipient of funds from Bikers Down had a cheque in his hands within 48-hours. Last October on a nice day, “Boon” Sedden and his wife Maggie were heading through Halifax when a car pulled out of a side street, made a left turn and clipped the front of the Sedden’s bike. The ensuing force spun them around, crushed his wife’s leg, and left them pinned under their Harley. Months after the accident, Maggie is still undergoing operations and treatments to her leg. Boon, though, is extremely quick to add that the speed with which the money arrived helped relieve a major stressor. A truck driver by trade, the initial 48-hours found things a bit of a blur, and he knows now first-hand what it means to have ‘Bikers helping Bikers’.

That mantra though has a special connection to the fund. You see, the subtitle for the fund is the Toad Memorial Fund. For those who have been around the East Coast motorcycling scene for any length of time, Toad needs no introduction. To the rest of the world, Mike “Toad” Roach is an iconic legend in Halifax and beyond. A custom bike builder, master mechanic and a great friend to the biker community only scratch the surface of the man affectionately known as ‘Toad’. Toad was recognized worldwide as being the first to build a side-by-side dual engine Harley. He established Toad’s Cycle Works in 1979. His wife, Marlene, worked in the business with him and they raised their family around the motorcycling community. Sadly, sometimes things happen all too quickly. From complaints of pain in his side to his death from pancreatic cancer, the eight weeks were far too short. As of January 22, 2007, Toad has been ridin’ with the angels—and smiling on east coast bikers ever since.

Marlene faced a choice with what to do with the last custom build that Toad completed.

Through the pain and loss, Marlene chose to honour the man she loved and chose to raffle the bike off in support of providing funds to the Bikers Down Society. Mike was the first to reach out and help a biker who was down and needed help. Had Mike been alive when the fund was brought into inception, I would find it hard to believe that anyone other than “Toad” would have put the first funds in. This raffle was held and James Purdy of Eastern Passage was the holder of the lucky ticket that was drawn at the Wharf Rat Rally in Digby in September of 2008.

Those funds, along with the proceeds from the annual ‘Toad Memorial Ride and Poker Run’, have been augmented by events like the Bikers Down Society Annual Memorial Dance, a six band mid-winter gala that have put the Bikers Down Society in the position where bikers can help bikers. As Jimi Swinamer, whose ‘One Man Band’ rockin’ performances often provide the musical backdrop to the events put it so well, “You are just banking your own money when you support the fund”.

This year there was a bike raffle for a Hyosung 250 Aquila to raise money. If you would like to make a donation to the fund or would like more information, check out the website (www.novascotiabikers.com) or write to Bikers Down Society/Toad Memorial Fund at 86 Amaranth Crescent, Dartmouth, Nova Scotia B2W 4B9.

Steve Laphen, volunteer coordinator, for the society is looking for all the help he can get to staff the multitude of events that Bikers Down attends to continue its awareness campaign and to raise funds for this worthwhile cause.

Though Nova Scotia may be thought of for its twisty coastal roads, scenic vistas, and Cabot Trail highlights, its greatest motorcycling long-term legacy may very well be the Bikers Down Society. For Bikers…by Bikers.