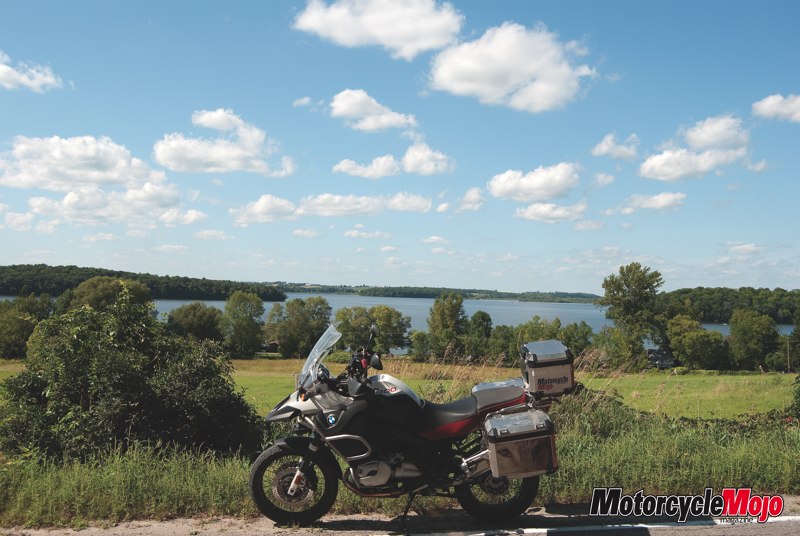 Story and Photos by Stu Seaton

Sometimes, just because you live in an area, you might think you know it. It’s a common misconception. I live in Northumberland County in Eastern Ontario, and thus I thought I knew it like the back of my hand. Right? That was a daffy thought. I bet some guy from Boise, Idaho, who spent a weekend visiting the sights, knows it better than me. So, it became an excuse for a Grade A ride. My better half and I decided to go explore our own backyard, and of course, our knowledge of our backyard has now changed. Now I know all the good stuff I’ve been missing all these years. The next question is, why?

Northumberland snuggles in between Durham and Hastings and has some neat geographical spots that make it quite unique. For starters, Northumberland has islands in Lake Ontario and a waterfront that just drips with history. If you stand on one of the Lake Ontario overlooks just north of Brighton, you’ll see two islands that are within the boundaries of Presqu’ile Provincial Park and form the outer barrier for Brighton Bay. Further out in Lake Ontario, you’ll see Nicholson Island and Scotch Bonnet, which at one time sported a full-time lighthouse keeper and is rumoured to have once hosted the Queen in ’59, when the Royal Yacht Britannia stopped by for a spot of tea. “Hey honey, get out the good dishes, the Queen is comin’ fer lunch!” Now the place has a fully automated light and is a roost for cormorants, but you can still make out the remains of the old lighthouse.

Northumberland is where some serious history happened back in 1804. That’s when the bigwigs of the day were trying to figure out where everything should be built and where the heck was a good place for a central government seat. They decided to check out what was then known as Newcastle and kick everything off with a good ol’ fashioned trial, which probably would have ended up with a good ol’ fashioned hangin’. Instead, the schooner carrying both the good guys and the bad guys from York (Toronto) sank, just off what is now known as Presqu’ile.

After the wreck and loss of all hands on the schooner HMS Speedy, the wigs said to heck with this nonsense and built everything in Cobourg. I personally think that was a dandy idea, as it kept everybody away from my favourite fishin’ hole.

The next big step in the history department came when the United States decided to ban booze. If there was such a thing as an underwater magnetometer that registered booze bottles, I bet that you could stock several hundred bars with real well-aged whiskey, all salvaged from the bottom of Brighton Bay. I’ll leave the history sleuths to visit Gosport and chitchat with some of the locals whose grandpappies used to have much faster boats than the Mounties did.

Gosport has changed over the years and is stepping into the 21st century with the emphasis on green. Enjoy some great eats and a waterfront view at one of two establishments, Dougall’s or the Harbourview Cafe, which was built at no little expense with wood-impregnated concrete and may one day sport a wind generator to power the whole place. Park yourself on the patio and watch the puff-boats play games on Brighton Bay. Don’t be surprised if Jeni from the Harbourview, or James from Dougall’s, wanders over to your table to shoot the breeze, ’cause that’s just how things are done here.

Northumberland is really trying to attract riders to come visit, and they’ve done some smart marketing, like mapping out two riding routes that hit the main attractions. They are even printing new maps on water-resistant paper so you don’t end up with paper porridge in your pocket should Mother Nature rain on your ride.

Heading north, you’ll find that one of the nicest things about Northumberland is simply the roads. The natural geography offers long winding hills on great pavement that make you feel like you’re riding on the top of the world. While so riding, stop at the side of the road and look over thousands of square kilometres of rolling farm land. It makes you want to sit on your bike and just stare at the view. That’s worth the effort alone.

Once you’ve filled your eyes with sights like Healy Falls and the various Trent River crossings and twisted your way around Rice Lake, you can find top-notch campgrounds, clean and relaxing B&B’s and good hotels, all within a stone’s throw. Some of the establishments are way past what you’d expect from a rural setting. One of the top 100 places to dine in Canada exists in Brighton, where, after filling your face with some of the nicest culinary creations in existence, you can top it all off with home-churned vanilla ice cream, drizzled in single-malt Scotch and sprinkled with fresh cracked pepper. I know, sounds horrid, but wait till you try it. Oh yeah.

Every place that we stopped at, the first question I came out with was: “Are you motorcycle friendly?” Not one negative answer came back. Ride in and enjoy the welcome! Folks couldn’t wait to show me what they had to offer.

Northumberland is an hour-and-a-half ride from Toronto, and if you want to experience one of the most relaxing rides available, coupled with top-notch amenities, plan to spend a couple of days and wander Northumberland. If you’re into history, you’ll definitely need some more time or a return visit, because tales of the past are literally around every corner.