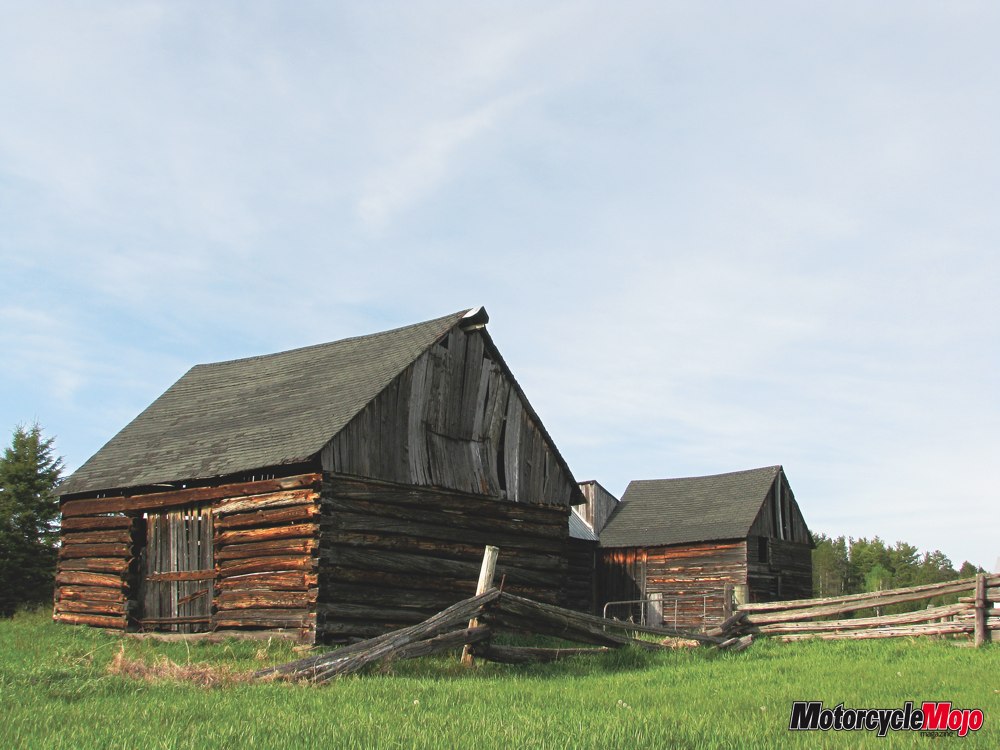 I’m being chased by the setting sun along historic Opeongo Line, the yellow orb playing hide-and-seek through the trees in my mirrors. As I bob up and down hills and weave around corner after corner, I catch sight of a profusion of trilliums at the forest’s edge, a weathered barn here, a stalwart steeple there.

When I finally stop to jot notes at the gravel roadside, I’m enveloped by an incessant swarm of black flies and mosquitoes. It’s May after all, peak season for the pesky bugs. In that moment, my thoughts wander to the challenges that early settlers faced here in the Ottawa Valley; they had to be tough to survive.

Today, more than half the Valley is still wilderness. That’s a sizeable chunk of its 2.4 million hectares (6 million acres) that stretch from Ottawa to Algonquin Park. I’ve been discovering its pioneer spirit and many attractions while riding some entertaining motorcycle routes mapped out by the Ottawa Valley Tourist Association (ottawavalley.travel).

I’d begun my ride this particular afternoon along the Opeongo (Renfrew County Road 66) just south of Wilno, a town that proudly proclaims itself Canada’s first Polish settlement. The old colonization road is a rollercoaster, roughened by patchy surface—nothing my 2010 Suzuki V-Strom 650 SEA can’t handle—but eventually, it transitions to better tarmac.

The adventure tourer is a workhorse that’s lightweight and reliable. Its generous cargo space (35-litre trunk and 48 litres of side-case capacity) is well suited to spending time on the road, as is a larger fuel tank that delivers excellent mileage. Thankfully, I didn’t have to put the ABS brakes to an emergency test because of deer bounding out of the woods, a common sight in the Valley.

A sidetrip along County Road 68 takes me to the hamlet of Rockingham, where the restored church is a classic vestige of pioneer life. Built in 1875, it features original pump organ, pews and stove. Sitting in the back row with sunlight flooding the windows, I can almost hear the hymns from Sunday mornings past.

The Opeongo Line boasts ghost towns like Balaclava, where the remains of an old lumber mill still stand. Foymount is one of those villages that look all but ghostly when I stop and talk with Roger Quade early that evening. The Quades were the first family to move there in the early 1970s, about the time the radar base was dismantled.

One of the highest points in the Ottawa Valley, the area offers some rewarding views. Toward Quadeville on County Road 512, you get a broad perspective of the Valley beyond traditional stone fences. North on 512 past Foymount, the road descends toward Cormac, revealing a panorama of the Bonnechere Valley.

If you’re inclined to explore what lies beneath the Valley, follow 512 a short distance to Eganville and take a tour of Bonnechere Caves. On a hot day, I found cool relief—and ancient stalactites and fossils—in the underground labyrinth of limestone.

The Opeongo snakes along County Road 64, then Hwy 132 toward Renfrew. South of the split with Hwy 41, smooth two-lane sweepers take me past dense coniferous forest. It’s interspersed with rock cuts and a placid picnic stop at Tooey Lake, where the sharp tap of woodpeckers resonates in a sighing breeze.

Near the village of Griffith, I spot a picturesque collection of barns set back from the highway. “Our family has owned this farm since 1860. I’ve still got the original deed signed by Queen Victoria!” says Brian McDonell with a laugh as we sit inside the property’s stark and musty house, built in the late 19th century.

Leaving Griffith through a corridor of tall pines and across its postcard bridge spanning the Madawaska River, I guide the ’Strom left onto County Road 71. Not far along, Regional Road 65 proves why it ranks as one of the best routes in the Valley.

Heading east on good surface, what lies ahead of me is sinuous and hilly road for a blissful 30 kilometres. It’s bordered by forest, craggy rock occasionally displaying graffiti – Pink Ponies (a female motorcycle club?) and Boys Weekend ’06!—and snatches of Centennial Lake and Black Donald Lake.

The last three kilometres are contiguous tight corners before reaching the junction with Calabogie Road 508. That’s followed by another 17 km of winding road before I’m back to the tranquillity of The Fans of Calabogie B&B (named for proprietor Cath Reynolds’ love of Asian decor), nestled in the trees overlooking Calabogie Lake.

Next day, weather still ideal, I head south on Hwy 41 from Griffith. At Denbigh, Hwy 28 climbs west over rolling hills and through forest and stone-strewn farmland toward Barry’s Bay. For the first time, I see logging trucks hauling their loads to lumber mills in places like Schutt and Palmer Rapids.

The history of the Ottawa Valley is steeped in the timber trade. Stands of white pine were plentiful and lumber barons ruled the forests during the 19th century. At a sawmill near Combermere, I snap photos of mill vehicles from a bygone age, decaying in the midday sun amidst the whine of saw blades and the sweet smell of freshly cut wood.

Passing Crooked Slide Park (a great picnic spot), I opt for a late lunch at The Bay Café in Barry’s Bay. Owner Debbie Purves and her daughter, Shannon, are a vivacious duo who make me feel right at home, dispensing good food and advice about what to see around town.

Debbie’s tips are timely, since the visitor information office up the street is closed that day. It’s inside a restored 1890s railroad station that also houses a rail museum. On the grounds is one of Ontario’s last wooden watertowers from the steam era. And for aviation buffs, a nearby park displays a replica of the renowned Avro Arrow and sculpture of its test pilot, local resident Janusz Zurakowski.

From Barry’s Bay, it’s an easy ride west along unruffled and curvy Hwy 60 to magnificent Algonquin Park. Not far to the east on 60, Shrine Hill offers a scenic Valley vista. It rivals the lookout on County Road 31 near Westmeath and Storyland Road (junction of County Road 1 and 4) for commanding views.

With only a couple of days left in my itinerary, I begin my next tour with a loop around Golden Lake and Round Lake. My first stop is the Algonquin Cultural Centre on the Golden Lake reserve. “Our purpose is to revive the Algonquin language and tradition,” president Ron Bernard tells me. “Everyone needs to know where they came from.”

With that affirming message, I cruise Hwy 60 as it meanders to Killaloe, then north on County Road 58 past Round Lake. It carries me down a two-lane that offers tantalizing glimpses of water and gently follows the undulating contour of the countryside. Ending in Pembroke, it’s a perfect opportunity to tour the city’s outdoor murals and extravagant homes built by the lumber barons.

You can’t visit the Valley without rafting the mighty Ottawa River, especially if you’ve never done it before. I and my wife take the plunge, figuratively speaking, by spending a day on the water with River Run Rafting. Their whitewater expertise and cosy accommodation at London House Inn make an unforgettable ending to my Ottawa Valley tour.