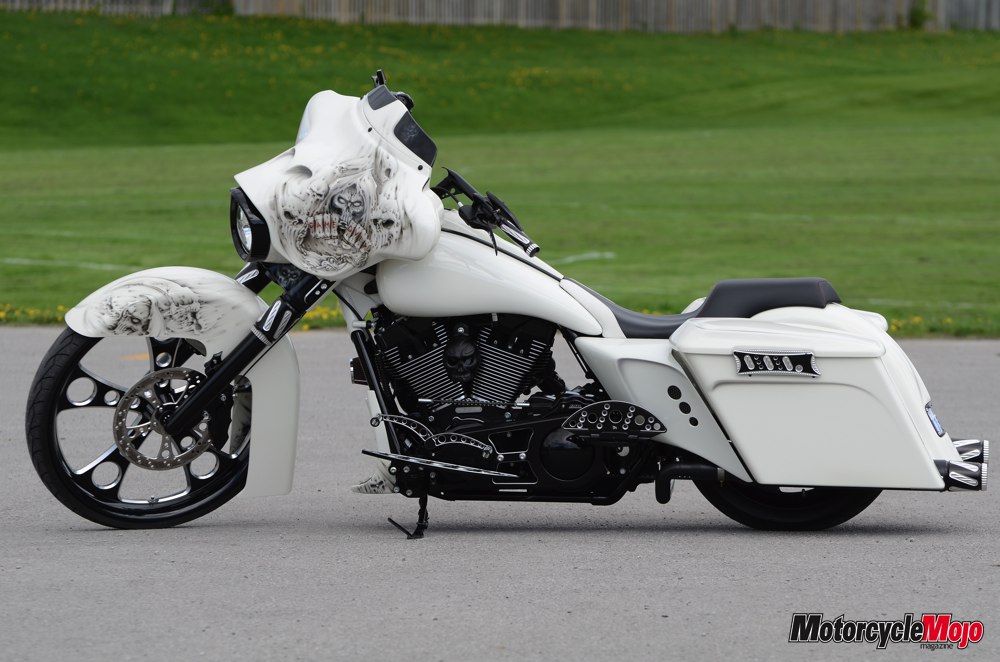 Inspired by a John Shope custom creation that had graced the cover of a motorcycle magazine, Rob Durisin of Newmarket, Ontario realized that he didn’t really want one of his own – he absolutely needed it.

Last September Durisin put his dream into action by shipping his Limited Edition 2009 Harley-Davidson Street Glide to John Shope’s Phoenix, Arizona based company, Sinister Industries. The practically new Harley-Davidson would serve as a donor bike for the project that took numerous emails, phone calls and photographs to complete.

From the beginning Durisin had a good idea of what he was after. Eventually christened Game Over, his custom bike had to exude attitude, so a floral and paisley design was never on the agenda. Instead, skulls were used extensively to complement the black on white motif that is understated, yet makes a powerful impression. But anyone who thinks that this custom is nothing more than a cosmetic pushover is in for a rude surprise. With a turbo charger hanging off the right side of the bike like a gunslinger’s pistol, it’s obvious that Durisin placed a lot of importance on engine performance; engine builders Trask Turbo Systems combined the turbo with a boost in displacement to 120 cubic inches to produce 158 horsepower and 164 lb-ft of torque at the rear wheel according to their Dyno.

You would expect that the overtly tall 26 inch front wheel and raked front end would be a hindrance to handling, but Durisin claims that the bike rides extremely well and has exemplary road manners. Best of all, Game Over is a comfortable fit. Despite its higher bars, Durisin says that his arms don’t go numb like they used to on his stock Road Glide. He adds with a laugh that 26 inch front wheels have already become passé – at least in Arizona where the bike was built. The latest trend is for even larger 30 inch wheels.

Perhaps the only down side to the build was its timing. For a Canadian motorcyclist, having a bike build complete in December when you can’t even ride it is terrible temptation to suffer. Durisin is understandably chuffed with the finished product, as was John Shope who took the bike on tour as part of Sinister’s display for the American winter show circuit. After trailering Game Over home from an Ohio show that Sinister was displaying it at, Durisin was goaded by friends into entering the bike in two shows in the Toronto area to pass the time until riding season. At the March National Motorcycle Show, Game Over won Best in Class, Best Paint, and Best Individual Display.

Durisin is adamant that his custom build isn’t destined to be a window display. Already in use as a daily rider, he recently added over 600 km to the odometer in a single day’s excursion. Rather than Game Over, it appears that the game has just begun; Durisin has already ordered another Sinister build, this time one based on a 2009 Road Glide, with a 30 inch wheel, of course.