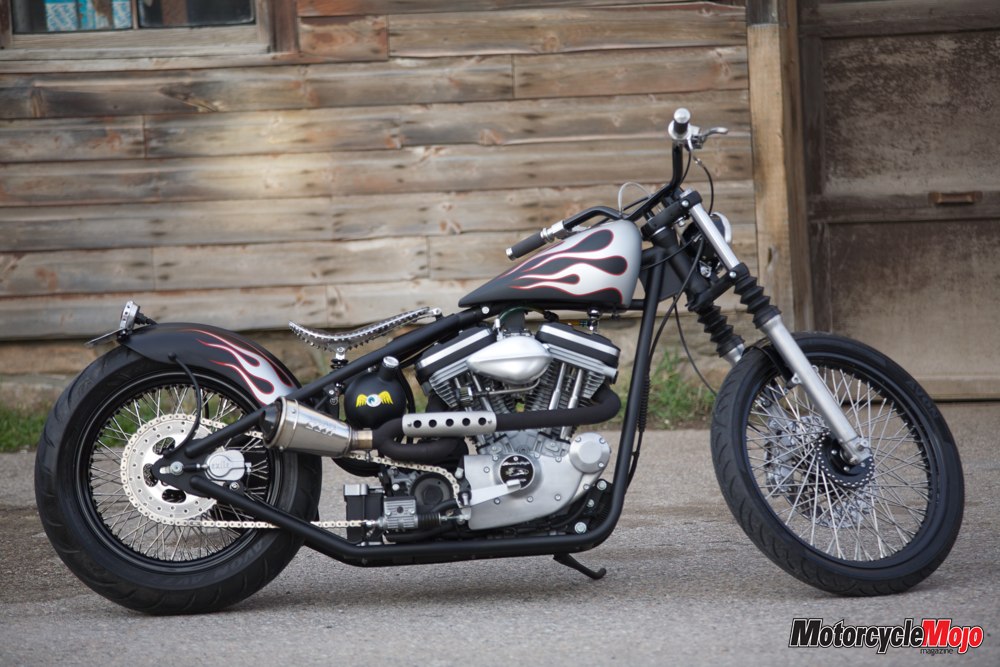 This bike began as a pair of black wheels and an idea that perhaps a long-forgotten 1997 Buell S1 engine could be rescued and put into action. The wheels were offered to Angelo De Angelis for his first build by friend and fellow builder Dave Germaine. Instead of using them right away, Angelo decided to build another bike around them, so he put them off to the side for the time being. Also hanging around in a corner of Angelo’s garage was a Buell S1 engine, purchased in 2004 as a donor driveline for an aftermarket softail frame that just didn’t work out. Giving up on that frame meant the engine was languishing in a corner of Angelo’s garage, hopefully to find a new life one day.

With these forgotten wheels and engine, the build began when when Angelo sourced a Maximum Metal bobber frame and the mock-up began taking shape, but it was a slow go. It became apparent that Angelo’s work schedule was holding up the build. This is where friends come in handy. While hanging around Angelo’s garage one night, Dave jokingly announced that he was going to hijack the project. It worked out well – Angelo didn’t have the time, and Dave had the time and no project on the go.

Unbeknownst to Angelo, Dave made good on his threat and absconded with the mocked-up bike while Angelo was away on holiday. Knowing that all the fabricating was finished, he took the project home, disassembled the mock-up and prepared it for final assembly. 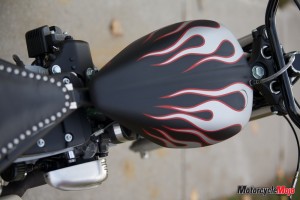 When Angelo returned to find his bike missing, he knew where to look. Dave had stripped the bike, cleaned up the frame and had it powdercoated, rebuilt the engine, and had it back in the frame.

Angelo moved the bike and boxes of parts back into his shop, and with newfound vigour, made the time to continue the final assembly. Dave spent 40 hours rewiring the whole bike, while Angelo found enough room to hold all of the electrics on a perforated plate mounted to the bottom of the frame, which nicely filled up an awkward open void.

Dave also had some spare parts kicking around to help with the build, like the SuperTrapp muffler that he took off his jet ski to mount to the header pipes that Angelo made.

The biggest hurdle Angelo ran into was making the front caliper fit on the rotor with the 80-spoke wheel; he was assured by Hawg Halters that the caliper would work in his application. Angelo tried to modify the 6-piston caliper by grinding some material off the side of the caliper, but instead, he ground right through the housing, exposing the inside bank of pistons. Angelo took full responsibility for the damaged caliper, but the news took HHI by surprise – they redesigned the caliper to fit and sent him the new one free of charge.

Angelo took about two years to get his project bobber finished, but without Dave’s help, it might still be on the bench. . .
“The whole bike just works so well – from starting to rideability.” Angelo said. “It’s hard to believe it’s a custom bike.”

A huge thank-you to Dave Germaine – without his help, this build would still not be finished.