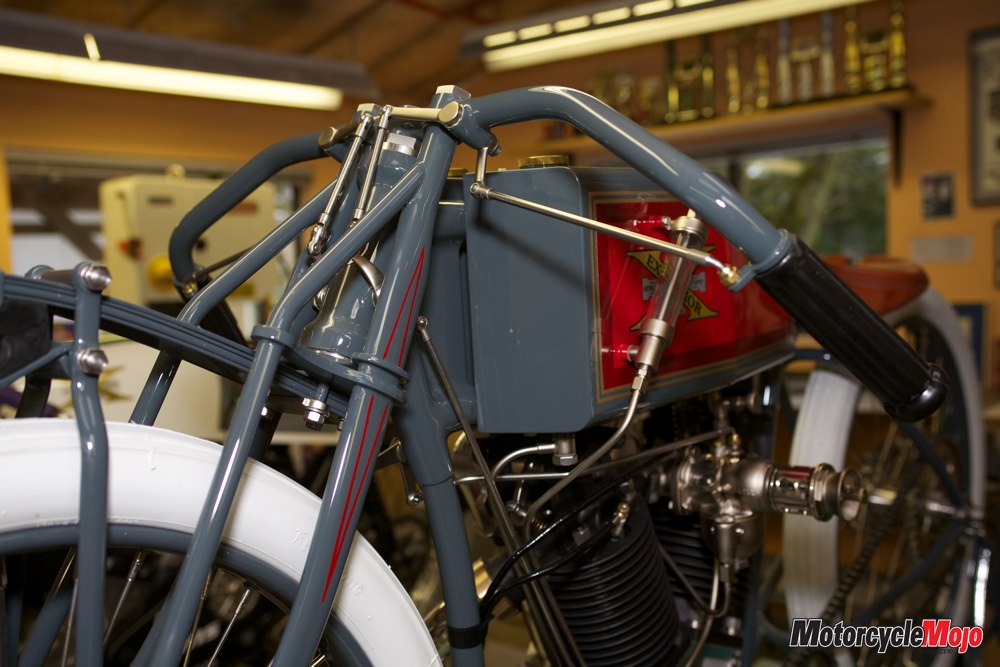 When subscriber Paul Baillet emailed and told me about a builder he knew and that a story on him might make for a good article, I first imagined a builder putting together another cookie-cutter American V-twin. Mr. Baillat directed me to the builder’s website, and I was blown away by what I saw. While the powerplant of the bike in question was an OHC, 45-degree, 998 cc V-twin, it was anything but a run-of-the-mill American V-twin.

Most of us have read about vintage motorcycles at some point in our lives. We have drooled over an exquisite vintage or antique bike we have seen on display in a museum and envisioned what it would look like sitting on our garage floor. You might own some paraphernalia of a vintage marque that might grace a wall of your home or shop, but that is as far as it goes for us mere mortals. But not all men are created equal. Paul Brodie is a master builder who not only acts on his dream of owning vintage motorcycles – he is fulfilling his passion by reinventing them.

After browsing his website, I was excited to meet Mr. Brodie and see his creation in person. After turning off the road into his driveway, I had serious doubts that I would make it to his shop. The wet season in southern British Columbia’s Fraser Valley resulted in deep muddy ruts that would better suit a four-wheel drive–equipped truck. My internal debate between walking to the shop in deep mud or risking getting stuck in my rental car was short-lived – I chose to hammer the pedal and hope for the best. 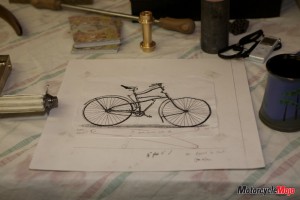 Walking in the door, I was confronted with a brightly lit shop with neatly cluttered walls and the sounds of Led Zeppelin playing in the background. Sitting on an overhead shelf that spans the shop was an Excelsior Board Track Racer and a Bultaco; both appeared to be in immaculate condition. A number of perfectly round cylinders also adorned the shelf. The shop isn’t huge, but although somewhat crowded, it is well laid out, with everything at Brodie’s fingertips. To my right was an array of various styles of bikes lined up side by side; beyond them was a milling machine and drill press, workbenches and parts bins, but the reason for my visit was to my left.

On one of the two bike stands was a new vintage racer; on the other stand, an immaculate Excelsior board track racer. It wasn’t an original 1919 Excelsior racer, because none are known to exist, but Brodie believes his is as close to the real thing as anyone will ever get. He began researching the ultra-rare board track racer and soon realized that all that existed of the original was a handful of photos of the right-hand side of the bike. No photos of the left side. So why choose such an obscure subject to recreate? In addition to a few photos, he had a set of badly corroded engine cases that would have to be heavily modified even to use for a pattern. 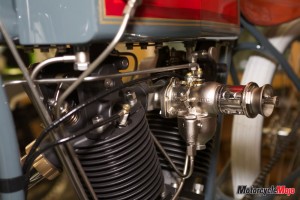 Brodie scoured the photos with a magnifying glass for countless hours, trying to distinguish shadowy areas from actual parts detail. While information was very limited and he was unable to locate any technical documentation about the bike, he did know what size the tires were. Using these as a reference point, he made detailed measurements from the photos, and he was then able to draw up technical drawings in order to recreate the 1919 Excelsior Board Track Racer as accurately as possible.

Having very little to work with would mean, of course, designing and making every single aspect of the motorcycle no matter how small the part, including internal and external engine components, cylinders, heads, timing chest gears and assembly, carburetor – the list is endless. A mammoth undertaking, even for the highly skilled.

Brodie is, however, quite qualified to take on such a task. He has been creating pieces out of metal for over 45 years, beginning with his high-school machine shop. He later spent four years in an automotive machine shop reconditioning and rebuilding engines, and always dreamed of one day making his own engine. He also once worked in a bicycle shop creating handmade mountain-bike frames, until he branched out and launched Brodie Bikes. Those in the high-end, hand-built bicycle scene a number of years ago will know that name. From there, Brodie began fabricating for others who were restoring vintage and antique motorcycles, including a 1912 Blackhawk, a 1896 Roper Steamer, a 1911 Curtiss and a 1900 Orient. All of this combined experience enabled Brodie to create a replica of the 1919 Excelsior Board Track Racer. His attention to detail and craftsmanship has been recognized: a pair of his own bikes, and bikes he has worked on, are featured in the Guggenheim Art of the Motorcycle exhibition.

After the design and drawings had been done, it was time to source a pattern maker and a foundry to cast various engine components. Brodie’s intent is to make a total of ten Excelsior racers, and to make the process affordable, economies of scale had to be considered. In other words, it doesn’t make sense to cast just two jugs at a time, so a whole run of cylinders were produced to provide enough stock to build all ten bikes. The downside to R&D and designing your own parts is that they may fail, leaving you with many useless pieces. Such was the case with one of the cylinders. Brodie found the failure while the engine was revving at 5000 rpm on a dyno, when the cylinder broke away from its base. Some of the remaining defective cylinders still adorn the shelf with the prototype Excelsior and the Bultaco, while others became candleholders and were given away as Christmas gifts.

In a quest to make the board track racer as accurate as possible, Brodie spent many hours on the phone with Jerry Capa, one of the foremost Excelsior experts in the United States, going over every detail of the bike, even down to the size of nuts and bolts, and if a washer was used in a particular place.

While Capa was free with his information, Brodie found that not every expert in the field is open with knowledge. Some collectors don’t like what he is doing, because they feel his actions are devaluing original antique motorcycles. Brodie doesn’t see it that way. He believes that if there aren’t any bikes like this left in existence, then all knowledge of them will be lost to history unless they are recreated for all to see. He also believes in sharing his knowledge; this is quite evident by how detailed his website is as he describes his work and restorations, including intricate details of building the Excelsior.

Brodie will be the first to admit that since there aren’t any photos of the left side of the bike, he had to take some artistic license in its design, but even North America’s foremost Excelsior experts have not questioned his left-side creativity.

According to Brodie, regular engines of the day produced around eight horsepower, and he understands that the 1919 racer may have had as much as 20–25 hp. Thanks to his ability to understand and build a high-performance engine, and thanks also to modern metallurgy and high-tech parts, Brodie has been able to record 70.9 hp at the rear wheel of his race bike.

In addition to being a master metalworker, Brodie is very talented at creating bodywork from sheet metal, carbon fibre and fibreglass, and the quality of his paintwork would rival a Harley-Davidson CVO.

It takes Brodie about 1000 hours to build one Excelsior Board Track Racer now that all the R&D and pattern making has been done. To date, Brodie has sold three of his projected ten. The first one went to past president of the Antique Motorcycle Club of America and CVMG founder Pete Gagan, and it now resides in Motorcyclepedia Museum, Newburgh, New York. The other two Excelsiors went to Holland and Australia.

If you think you might like one to park in the corner of your living room for you and your friends to drool over, number four is now available, but ownership doesn’t come cheap with an asking price of $129,000. Not bad, considering that the inspiration for the original 1919 Excelsior Board Track Racer was the 1915 Cyclone, which sold at auction for $556,400 a few years ago.

To see more of Brodie’s work and an extensive account of the design and build of the 1919 Excelsior Board Track Racer, go to flashbackfab.com.