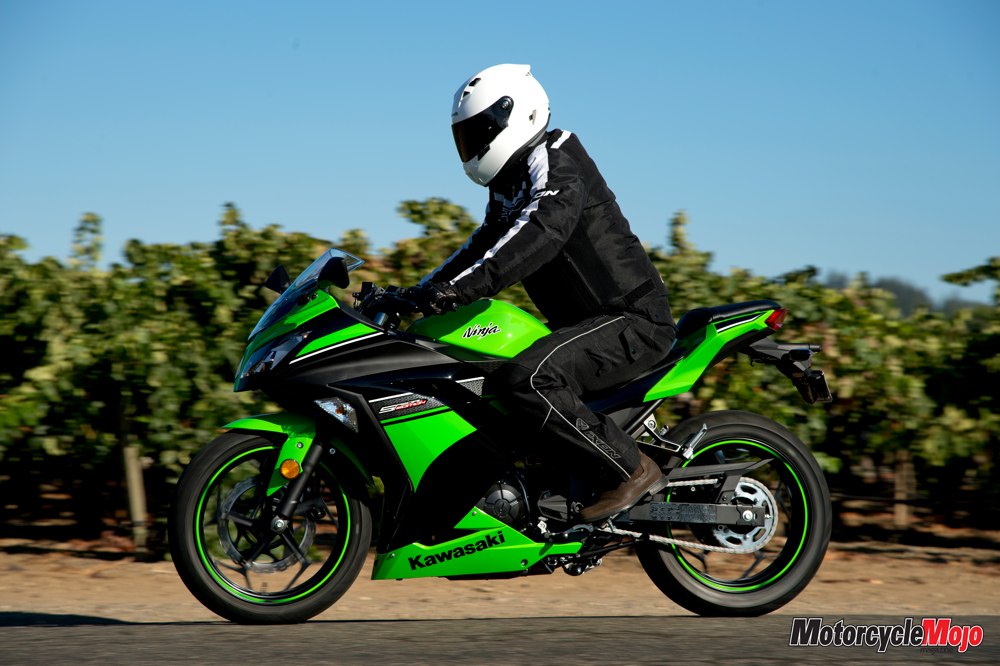 Kawasaki’s popular Ninja 250 can trace its roots all the way back to 1983, when it was first introduced to the Japanese market. The parallel-twin sportbike entered the Canadian market in 1986 and has since proven popular with riding schools and beginners, proving itself dependable enough for the former and offering adequate performance to satisfy the latter. It has received a few generational upgrades over the years, and has even changed names a couple of times (for a short time it was sold as the ZZR-250). But Kawasaki’s smallest Ninja has just received its biggest redesign ever – it has gained some displacement and again changed names. Meet the 2013 Ninja 300.

I gladly accepted Editor Roberts’ offer to fly to California to sample the new bike. As a former road racer, I have a keen interest in sportbikes, though I don’t believe they have to be the biggest or most powerful to be appealing. Having already spent some time on the Ninja 250R and Honda’s CBR250R, I was looking forward to seeing how the new 300 would perform. 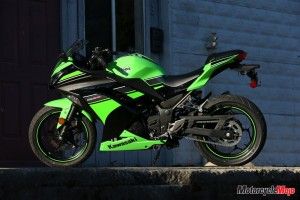 There was ample time to test the newest Ninja’ s handling along Skaggs Springs Road, a fabulous stretch of motorcycling heaven that heads west out of Healdsburg, a town just north of San Francisco, for 100 kilometres toward the Pacific Coast Highway. It’s a wonderfully winding strip of asphalt with wide, flowing curves in the first part leading to tight, tree-lined twisties nearing the coast. We’d then ride south along the PCH, hugging the coast for a few miles to our lunch stop before turning around and heading back to Healdsburg.

It’s not hard to mistake the Ninja 300 for a modern, 600 cc supersport machine. The bike looks larger than the outgoing Ninja 250R; the fairing is wider and more aggressively styled, with lines that mimic the bigger Ninja models more faithfully. In fact, only the taller, clip-on handlebars and narrower rear tire give it away as a smaller-than-600 machine. The fuel tank is also wider, though it has lost one litre of capacity compared to the Ninja 250R, now holding 17 litres. This won’t be a problem, though, as the 300 gets better gas mileage than the 250, but we’ll get to that later.

Sitting on the bike reinforces the optical illusion, as it feels like a larger machine, especially between the knees, where the wider gas tank spreads your legs farther apart than on the 250R. Seat height is now 10 mm taller, at 785 mm (30.9 in.), though it doesn’t feel taller, because the rear sub-frame has been redesigned and the seat is now more level. However, the bike feels much lighter than any 600 cc bike out there, as it should, considering its claimed 172 kg (379 lb.) wet weight. This puts it at 10 kilos more than the Honda, though you don’t really feel the added weight when moving. 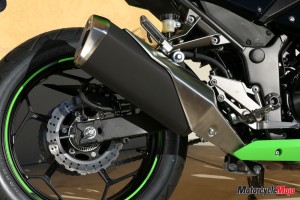 A new instrument panel includes a large, centrally mounted tachometer with a smaller digital display to the lower right. Only basic info is included in the display, including speed, two trip meters, odometer, a bar-type fuel gauge and a clock. A gear-position indicator was curiously omitted yet would be so useful.

The biggest mechanical change is to the engine, which has a 7.8 mm longer stroke (now 49 mm) – it has gained 47 cc and now displaces 296 cc. To smooth engine vibration, there are now rubber mounts attaching it at the front of the frame. Until now in North America, we’ve had to be content with carburetors on the 250R, while other countries got fuel injection. Digital fuel metering is finally available on the small twin, and the system uses two 32 mm throttle bodies that breathe into larger intake ports with larger valves.

Inside the engine are new, lighter pistons redesigned for improved cooling, shorter connecting rods and stronger crank bearings. Due to the larger displacement, the compression ratio has been reduced to 10.6:1 from 11.6:1 to allow the engine to run on regular fuel. All those changes have amounted to an increase of eight horsepower (now 39 hp at the crankshaft), but more importantly, they’ve bumped peak torque to 20 ft-lb from 16, with more torque available throughout the rev range.

Oil capacity has been increased to 2.4 litres from 1.7 litres, and when it’s time to change its oil, you’ll no longer have to remove a cover to replace a cartridge-type filter; Kawasaki has incorporated a spin-on oil filter, conveniently located in front of the engine and accessible without removing the fairing lower.

You can really appreciate the additional power if you ride the Ninja 300 back-to-back with the Ninja 250, and fortunately, the folks at Kawasaki had the quarter-litre model on hand for comparison. The first thing you notice on start-up is that there’s no more choke to fiddle with or extended warm-up times to contend with, due to the new bike’s EFI. Selecting first gear was much smoother on the new bike, and letting the clutch out from a stop required less throttle. Exclusively on such a small machine, Kawasaki has added a slipper clutch which also has an assist feature that reduces lever effort by 25 percent.

Transmission gear ratios have been altered slightly, with first gear slightly lower than before to aid take-off, and sixth gear slightly taller to drop revs on the highway. The other ratios are unchanged, although gears are thicker to handle the increased horsepower. There’s also a new, roller-type shifter drum that smooths shifting action.

Once rolling, the new Ninja made the old one feel like a slug, though if memory serves me well, the Honda CBR250R still has the bottom-end torque advantage. The difference in power between old and new Ninjas was quite noticeable along the tighter sections of Skaggs Springs Road, where I used mostly half to three-quarter throttle on the 300 to keep the moderately quick pace set by our ride guide, especially when accelerating out of corners, but I had to twist the 250’s throttle to the stop – often – to keep up. I also had to row through the gearbox with much more vigour on the 250. The power band was also much flatter on the 300, and throttle response was much sharper, too.

The Ninja 300 was quite at home on northern California’s winding roads, feeling more planted than the 250 with a more compliant suspension setup. Where the 250’s harsher suspension would buck and kick me off the seat over sharp bumps, the 300 rode over them with much more poise. It railed through corners with confidence-inspiring ease, and was only slightly perturbed when hitting bumps mid-corner. Overall, the 300 had me smiling along the twisty road; it flowed through corners on momentum and without being overwhelming, and the slipper clutch made downshifting remarkably smooth. I don’t think I would have had a better time on a bigger, faster bike, and would probably have worked harder to keep the pace.

Where the 300 showed the biggest improvement over the 250, however, was at highway speeds, where it had plenty of reserve power on hand, making passing quite easy. It was much smoother than the old bike, firstly due to the engine’s rubber mounting, but also because of its taller overall gearing. The rear sprocket has gone from 45 teeth to 42 and this has reduced engine revs by about 1800 rpm at 100 km/h, the engine now spinning at around 6600 rpm. On the highway, the 250 felt buzzy and busy, whereas the 300 felt much more relaxed and smooth. Even the mirrors worked better, their widest portion now farther outward, providing an improved rear view.

Also making highway riding more tolerable was the seating position, which is mostly upright and comfy; I’m six feet tall and didn’t feel cramped. Wind protection was about like what you’d find on a 600 superport, with everything above mid-chest level taking on the windblast, though there was no buffeting.
The frame has been beefed up using steel tubes that are 150 percent stronger than before, some extra gusseting has been added, and the top tubes are spread farther apart for increased rigidity. Suspension settings have been revised; the fork has softer compression and rebound damping but contains more oil for additional progressive action and less dive under braking. The shock uses a shorter spring, though suspension travel is unchanged, and damping has been increased in both directions. The rear wheel is also a 13mm wider and on it is mounted a wider 140/70-17 tire (the Ninja 250R used a 130).

One area where the 300 hasn’t improved is in brake feel. Most probably to keep costs down, the Ninja 250R braking components have been retained, with a 290 mm petal disc and a twin-piston caliper up front, while out back there is a 220 mm petal disc with twin-piston caliper. The brakes worked fine and if needed, a good, hard squeeze at the lever hauled the Ninja down from speed effectively, but the rest of the bike is such an improvement over the old one that it seems that the brakes now lag behind. Of course, Kawasaki has included an ABS model for 2013, which is a welcome addition. The ABS adds just two kilos to the Ninja.
Although there’s no official factory claim yet, the folks at Kawasaki made a big deal about the Ninja 300’s remarkable fuel economy. I was supposed to take part in a fuel-economy ride the morning following our test ride, but conflicting flight schedules meant I had to leave early, so I missed out. However, some of the American journalists who did take part recorded fuel consumption figures as low as 2.2L/100 km (128 mpg), with several seeing figures in the 2.9L/100 km (97 mpg) range. The latter figure would give the Ninja a theoretical range of more than 550 km.

The Ninja 300’s added horsepower and big-bike look should appeal to a broader audience than the older bike. It won’t be readily outgrown, and it’s powerful enough that a capable rider will have no trouble keeping up with bigger bikes on winding roads, or even on the open highway. I could easily live with this as an only bike, though two-up, long-distance touring would not be on the schedule. I think that many riders, whether new or experienced, are looking for this type of performance and price point, and this newly sized Ninja fits just right.