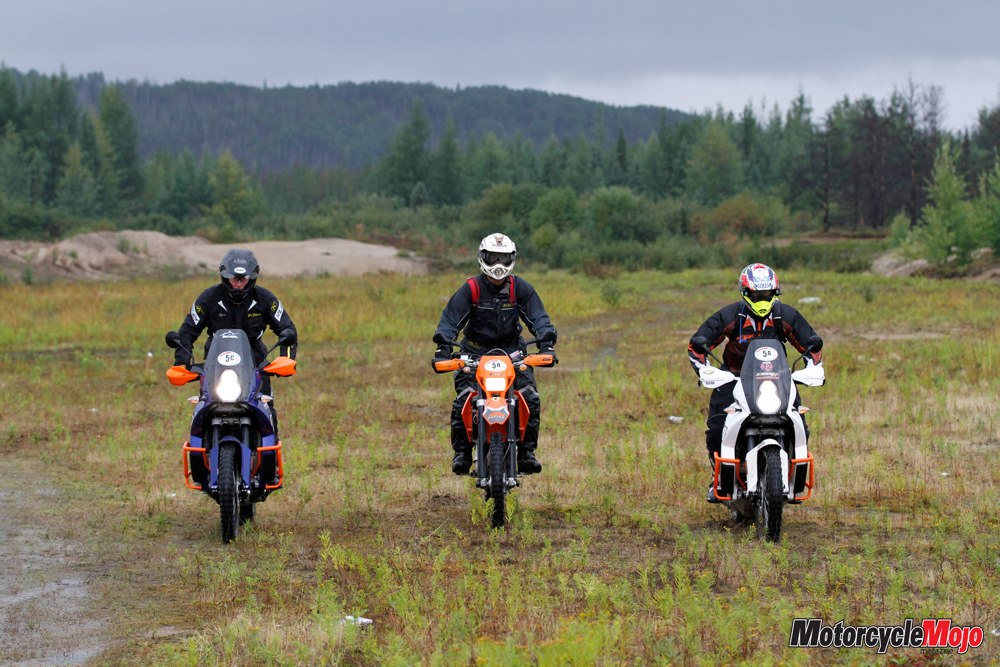 Even Grown Men Need Play Time Once in a While.

When my teammate Pascal Bergeron said of our other partner in crime, “He’s a hothead,” I thought oh perfect, this is going to be one exciting ride. The three of us were entered as team #5 for the first-edition KTM Orange Crush Adventure Rally.

The teammate Pascal spoke of was Jean Francois (Jeff) Charlot, runner-up in the recent Quarter-Mile Wheelie World Championships. After he demonstrated some endless balance-point wheelies at 100 km/h, the stage was set for what became a headlong charge across Quebec’s hinterland. Fueled by Red Bull and testosterone, we ripped it up big time for two full days on some of Quebec’s finest twisty, gravel forest roads. Most of them double as logging roads, snowmobile and ATV trails, and they follow the lay of the land. They are wide, undulating and fast.

I was aboard a Monette Sports KTM 990 Adventure. When Alan Trottier, the shop owner, handed me the key, I assured him I would take good care of his new bike. In reality, the big 990 took good care of me. At the end of it all, I came away with a smile on my face and a huge appreciation for the 120-horsepower, blue-and-flaming-orange beauty. The Adventure was the perfect bike for the task at hand; it has great suspension, decent weather protection and a wide supportive seat that left me feeling pretty good after the long first day. 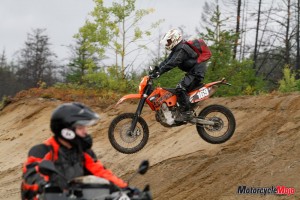 My rally started at 4:15 a.m. with a taxi ride from the hotel to the start at Montreal’s Parc Olympique. By daybreak, each of the thirty-odd, three–person teams headed due north to the remote Quebec village destination of Parent, a distance of over 400 km.

After a timed motocross special test, we followed the rally-style road-book and navigated our way into Parent, taking the time for photos with four-time Dakar winner and all-round good guy Cyril Despres. KTM brought in their superstar rally rider to ride the event, shake hands and tell stories during his first visit to Canada. Cyril didn’t disappoint; he was tireless in taking the time to speak with everyone, sign autographs and pose for photos.
The Orange Crush participants, mostly from Quebec, came from a wide cross-section of backgrounds, and their machinery varied wildly from rally-prepped KTMs to a Yamaha DT 200.

The mayor of Parent greeted us upon our arrival in town, and it was obvious he was pleased to welcome such a large group to this remote village. He was also pleased to state that there are 30,000 kilometres of gravel roads in the Haut-Saint-Maurice region of Quebec, and visitors are welcome to enjoy them.

I bunked with fellow competitor Denis Lussier in a place called La Gîte. The basic rooms were comfortable, with showers down the hall. They were clean and the water was hot; I couldn’t ask for more after a full, 400-kilometre day. It felt good to settle down to a hearty meal in the Hotel Central and hit the hay early.

The second day commenced with the 5:00 a.m. honking of a truck horn as the Chevy alarm clock drove around town waking up everyone, including the 300 or so local residents; apparently, the rally is so good for business they don’t seem to care.

We started the day under threatening skies. Unfazed by the weather, I was anxious to get the 360- kilometre day going. I have to admit, the 990 Adventure is a true blast to ride. Its ultra-precise fuel metering, combined with pristine gravel roads, make taching up the throttle more than a little fun.

If you are familiar with the Steve McQueen movie Bullitt, you will know that the car-chase scenes in the movie are some of the best ever filmed. You will recognize the throaty sound of McQueen’s Mustang GT in the movie if you ride a 990 KTM; the KTM’s intake drone is identical to the Mustang in lower rpm – as you accelerate, the note changes, and if you dare to screw it on more, the pitch of the exhaust note takes command of your senses. The 990’s bark turns to a higher-pitched scream that emulates an alcohol-burning sprint car. Needless to say, I couldn’t get enough of two-wheel drifting the 990 into the smooth gravel corners, then using the responsive power to slide out past the apex, shooting a sand roost at my teammate Jeff. The affable Quebecois responded by ripping off another, almost endless wheelie. We wooted at our antics and fist-bumped at every stop. It was motorized nirvana and a ballet on wheels, both at the same time. I smiled in my helmet all day, regardless of the driving rain that plagued us. I have to give a big shout-out to my KLIM Badlands Gore-Tex suit, Sidi Adventure Gore-Tex Boots and Arai DS helmet. The Orange Crush rally was the first time I had dealt with serious rain using all my new gear, and fortunately I stayed warm, dry, comfortable and protected from head to foot, all day long.

The Orange Crush Adventure Rally is the brainchild of experienced event organizer Marc Fontaine; he and his team put on a slick and seamless event, while Thierry Lacombe laid out the gruelling weekend course.

Over 800 kilometres is a long ride, but most handled the challenge in stride. Marc stressed that the Orange Crush was a navigational rally and that speed was not a factor. Of course, his words went out the window in the first few kilometres of the ride.

Pascal Bergeron, the owner of Enduro KTM in Quebec City, was our team leader and did our navigating with flawless precision. Pascal is one of those shop owners who participates in every type of event and rides like the wind. “I knew the first few kilometres that we had the perfect team,” he said of our last-minute match-up. He and I flew down the occasional wide-open stretch side by side. At full song, his Akrapovic-equipped 990 was a joy to listen to, and Pascal really likes to pour on the coal.

The rally ended up in La Tuque for dinner, awards, live music and flowing libations. As the night drew to a close, Cyril came over and shook my hand. “Canada is beautiful,” he said of his first experience here, and disappeared into the darkness. “See you next year,” I shouted back at him, but I don’t think he heard me.