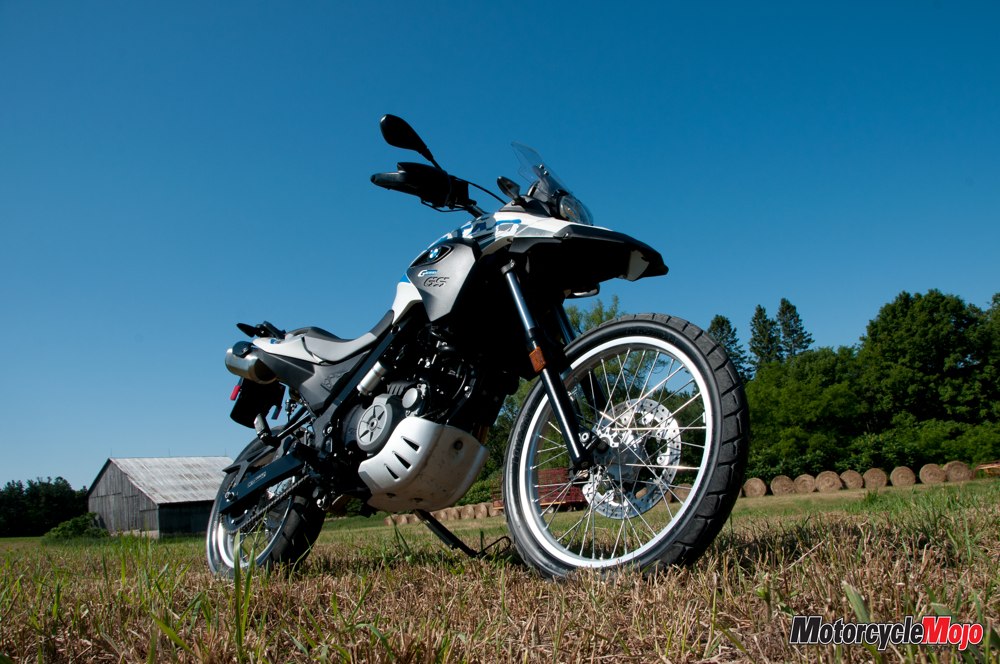 I was very excited when Editor Roberts asked me to test the new BMW G650GS Sertão. First, I really wanted to ride the newer version of BMW’s dual-sport single. It used to be available as the 652 cc, single-cylinder F650GS, but was then discontinued and replaced with the 798 cc, twin-cylinder F650GS for a couple of years before coming back as the G650GS single again (confused yet?). And secondly, I had hoped that the test was going to take place at some exotic off-road location like Morocco, the mountains of Spain or in the Sertão region of Brazil, where its name came from. No such luck; I didn’t need my passport to test the bike at our off-road school.

My first impression of the Sertão was that I loved it. It has neat graphics with its white, black and blue palette.[GR1]  If you have ridden a BMW F650GS Dakar you will find the Sertão has a very familiar look and feel; it is, after all, essentially the same machine. As soon as I swung a leg over it I noticed the taller seat height compared to the standard G650GS we have at the off-road school. The 21-inch front wheel, 17-inch rear wheel, taller suspension and 860 mm (33.9 in.) seat height meant I couldn’t touch ground flat-footed despite my 34-inch inseam. If you’re taller and still want more seat height, you can order a taller seat that’ll raise your butt to 900 mm (35.4 in.) at no extra cost. The contoured seat is very comfortable, with room to move around. Even more important for off-road riding was the comfortable standing position, though I raised the bars by moving them forward to a spot where I found it better suited me whether I was seated or standing. 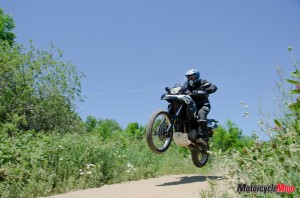 The engine is a liquid-cooled, single-cylinder 652 cc thumper with double overhead cams and a dual–spark plug, four-valve head. The catalytic converter–equipped exhaust note is quiet, with twin mufflers located under the tailpiece. The left can contains the catalytic converter, with a crossover pipe to the right can where the exhaust exits. Some vibration is noticeable at speed, though the counterbalancer made it one of the smoothest big, single-cylinder bikes I have ridden in a while.

Equipped with electronic fuel injection, the 48-horsepower motor sips fuel. I rode the bike relatively hard both on- and off-road and obtained 5 L/100 km (56 mpg), and if you are touring, you can expect up to 3.8 L/100 km (74 mpg). The 14-litre fuel tank is located under the seat, which helps keep the centre of gravity low for better handling and makes the bike feel lighter than its claimed curb weight of 192 kg (423 lb.).

There is no fuel gauge, though a low-fuel warning light will come on with approximately four litres of fuel remaining. You can also reset the trip meter to zero at each fill-up to monitor gas consumption.

Where the gas tank is usually located on bikes, ahead of the rider, the Sertão contains its electrics, battery and the air intake. To access the battery, you have to remove six Torx screws and remove the middle panel of the faux tank. The battery is a regular-maintenance type. Motorcycles designed for off-road tend to tip over more often than streetbikes, and since regular batteries have an overflow vent tube that drains below the bike, a tip-over can result in a loss of battery electrolyte. I would switch the battery out for a sealed, maintenance-free unit when the time comes to replace the OEM battery. 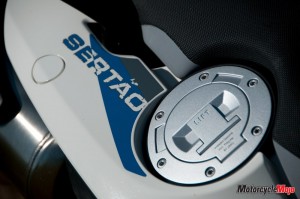 A 650 cc engine is big for most purely off-road applications. On the street, however, it is on the small side, especially when compared to the monster-sized R1200GS. Despite this, it still has a good hit of power. During a photo session, I scared myself by accelerating out of a U-turn for another pass with too much throttle in first gear, which sent the front wheel clawing upward. I don’t condone wheelies on the street, but the abrupt power can prove very useful when riding over logs in the trails.

My budget-minded, world-travelling pal, Rene Cormier, loves his F650GS Dakar. He describes the reliability, fuel economy, load-carrying abilities and ride comfort as incredible. I also have a few instructor friends who use the F650GS as their only bike for commuting, off-road riding and touring when on holiday. Touring capabilities won’t be what a 1200 cc adventure bike can handle, but you will be able to buy a Sertão at about half the bigger bike’s MSRP, which will ultimately allow you to tour that much longer.

On the highway, the digital tachometer shows 4000 rpm at 100 km/h, and a thousand more revs gets the speedo to 120 km/h. Indicated redline is 7000 rpm, though I didn’t have the opportunity to test top speed legally. My pals tell me the F650GS will reach 160 km/h, so it’s fair to assume the Sertão will do the same. At around 3000 rpm, the intake sounds a bit like an Evinrude outboard. I got used to the sound, but it might annoy some riders. The bike is chain driven using a 520 O-ring chain and a 47-tooth rear sprocket. If you don’t plan on taking the bike on any off-road excursions and want better fuel mileage and lower revs when touring, you can switch to a smaller rear sprocket.

The non-adjustable windshield provides adequate wind coverage. Taller shields are available, but if you choose to install one, make sure you can still see over the top of it when seated, as a dirty, scratched screen is difficult to see through at night. Many luggage accessories are available from BMW, as well as from several aftermarket companies, since the standard F650GS single has already been available for several years.

I rode the bike every day for a week, commuting to work via paved and gravel roads, as well as lots of trails I can use between home and work. The Sertão proved perfect for that kind of riding and was more at home off-road than the standard G650GS. The taller suspension and 21-inch front wheel really make a difference on loose terrain. The bottom of the engine is protected with a skid plate, but serious off-roaders will want a larger, sturdier plate. I’d also suggest installing some engine guards to protect the cases in case of a crash. Replacing the stock plastic hand guards with sturdier ones would be another upgrade I’d recommend for serious dirt riding, and wider foot pegs would prove more comfortable when standing than the narrow stock pegs. I liked the rubber-mounted turn signals; they’ll take abuse if the bike is dropped.

If you’re the type to shoot your bike with an accessory money-gun, I would also suggest upgrading the stock fork springs to stiffer ones and adding two inches to the side-stand length — the bike leans way over on the side stand, which proves problematic in soft terrain.

The stock Metzeler Tourance tires do a good job for the mixed riding the bike is designed for. They don’t howl on pavement like full knobbies, and they still provide good traction on rain-soaked on-ramps. Off road, the Metzelers work great until you hit mud or deep sand, and then the ride becomes much more exciting as traction diminishes.

The instrumentation has an analog speedometer, and an LCD that shows a digital bar-graph tach, clock, two trip meters and odometer. The tach is small and hard to read the rpm while riding. The Sertão comes equipped with four-way flashers, which is a feature every street-legal bike should have. Another great stock feature is the heated grips. Some riders thought it was odd that the electrical wiring powering the heated grips rotates as you turn the throttle. On other BMW motorcycles, the wires are routed internally and are out of sight.

My test bike came equipped with optional ABS brakes ($525), which work very well on wet pavement. I hammered on the brakes in the rain with no loss of traction, and the single discs at each wheel did a good job of stopping the bike. It is almost like cheating, since emergency braking in the rain on an enduro tread pattern is usually very challenging. For off-road riding, you can deactivate the ABS by simply pushing the ABS button while turning the ignition switch on.

So, who would buy the BMW Sertão? I talked to dealer sales reps, and they told me sales are going to all kinds of riders. Some are first-time riders who aspire to doing a bit more off-road than the standard G650GS was designed for. There were also some returning riders, who after some time away from motorcycling thought the Sertão would fit their budget and riding plans. Some motorcyclists purchased the Sertão for their first jump into the adventure-touring world.
There are less expensive dual-sport bikes of similar engine size out there, but it’s hard to pass on BMW’s three-year warranty and the reputed reliability of the G650GS powerplant.