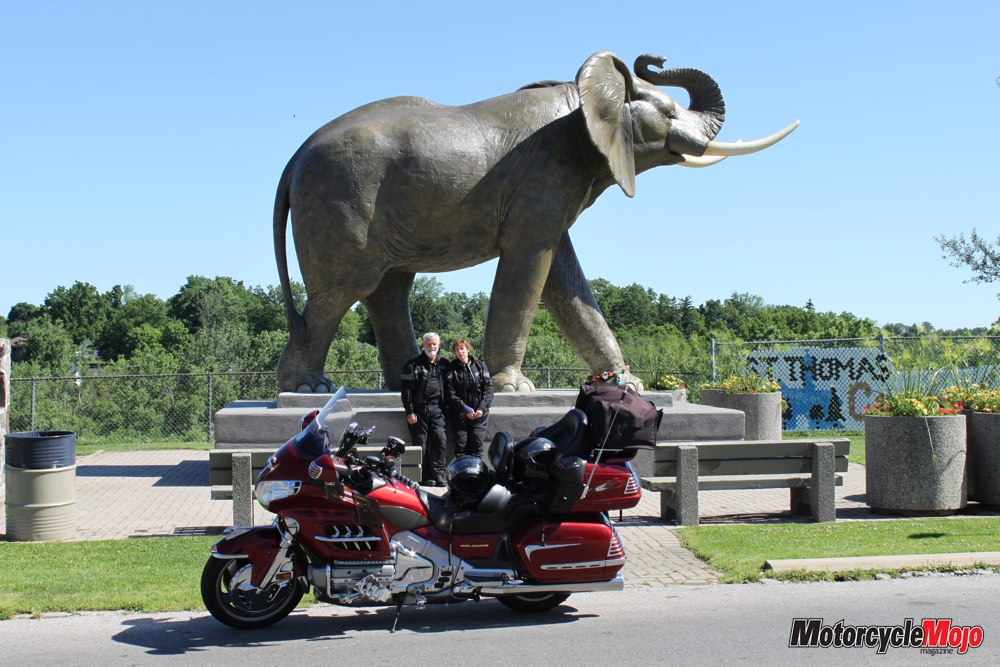 Hank, Jeff, Debbie, Tina and I arrive at the starting point of our tour, Port Colborne, via Highway 407. This may be the most expensive toll road in North America, but we successfully avoid torturous Toronto by using it. One of thirteen ports on the shores of Lake Erie, Port Colborne lies on its north shore, about 34 kilometres from the Niagara River. Fondly called “Ontario’s South Coast,” Lake Erie’s historical shoreline captures my interest. Cruising along beautiful Highway 406 we cross over the old Welland Canal and I can’t help but wonder how large ships managed to navigate this narrow passageway with only a few inches to spare.

At the west edge of town we begin our trek, following Lakeshore Road. While negotiating the constant slow-speed twists and turns, I catch fleeting glimpses of Lake Erie between non-stop cottages interspersed by gorgeous mansions owned by the well moneyed. The random architectural styles tell of a transition from old family cottages steeped in memories, to modern year-round residences. At Moulton Bay, we stop near Long Beach Conservation Area, where the unique and sometimes malodorous smell of Lake Erie’s warm shallow waters permeates the hot summer air. Although the fourth-largest of the five Great Lakes, Lake Erie has an average depth of only 19 metres, with the deepest part near Long Point at 64 metres. Because it is so shallow, Lake Erie heats up quickly and has a much lower water-retention time of only 2.6 years; by contrast, think of Lake Superior’s 191 years. Amazingly, the Great Lakes hold 20% of the entire world’s fresh water supply, and because of their size, they each experience a lunar tide twice daily, with Lake Erie peaking between one and four centimetres in height.

It is 23°C, and puffy clouds that look like cotton candy move imperceptibly across the azure sky as we quietly continue our ride, basking in the essence of a perfect Ontario weekend, far from the frenetic crowds of the urban Golden Horseshoe. Lakeshore Road transitions to North Shore Road, and when we arrive at Port Maitland, we find that there is no bridge to cross the Grand River. Detouring north to Dunnville, we take the Dover Bridge, follow Rainham Road to County Road 49 and then head south, where we rejoin Lakeshore Road. As we pass Selkirk Provincial Park, the tall smokestacks of the mothballed Nanticoke Generating Station poke their heads above the tall shoreline trees. A coal-fired electrical generating plant, Nanticoke was shut down, but if needed it may reopen using natural gas or biomass at some future date. 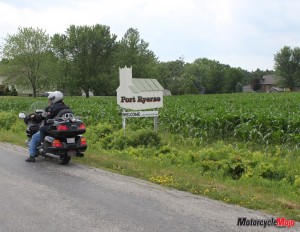 Just north of Nanticoke, we rejoin Highway 3, The Talbot Trail, which takes us into the pretty town of Port Dover on the Lynn River, home of the legendary “Friday the 13th” motorcycling spectacle. We park on Walker Street, which overlooks the village and harbour, and stroll across to the Erie Beach Hotel. Jeff insists upon eating here, and the phenomenal Lake Erie perch dinner we lunch on creates a respect in me for his culinary taste. Afterward, we take a few minutes to stroll down to the beach, where hundreds of pale-white Ontario bodies are soaking up the sun and wading into the shallow lake for hundreds of yards. A statue standing at the water’s edge is a poignant reminder of commercial fishermen lost to Lake Erie’s historical sudden fury. On the harbour wharf, fishermen quietly casting their bait into the water where mallard ducks are scurrying about with their little ones in tow belies the noise and din of the Friday the 13th hoopla, when this town becomes party central.

County Road 6 takes us out of Port Dover and just a bit down the road, we turn left onto Port Ryerse Road heading toward Port Ryerse. Many of these ports were active decades ago when commercial fishing in Lake Erie was big business and the lake had bountiful supplies of cisco (freshwater herring), pickerel, salmon and perch. A failure to recognize the obvious finally came to fruition; decades of overfishing, combined with industrial pollution, took their respective tolls and decimated Lake Erie’s fish stocks. Today small hamlets remain, their names echoing the glorious bygone days that are now distant, faded memories.

Following County Road 24, we pass by Turkey Point Provincial Park on Front Road, through the cottonwoods and firs to Port Rowan and Long Point. Lakeshore Road takes us past Port Royal, another long-forgotten memory, and leads us into Port Burwell, on the shores of Big Otter Creek. Once a major shipbuilding centre, Port Burwell now survives on tourism and farming. The lighthouse has been converted to a museum and houses a model of the railcar ferry that once made routine trips transporting coal between Port Burwell and Ashtabula, Ohio. The 2.2-kilometre beach and sand dunes at Port Burwell are among the natural features that draw tourism to Lake Erie’s shores.

Riding on, we pass by irrigation heads showering the crops, planted right up to the roadside. With no fences needed to keep livestock in, farmers use every square inch of the rich, fertile land for cash-crop farming. The white potato blossoms bloom row upon row, and corn that is already four feet high speaks loudly to a mild climate and a landmass that is only a few kilometres north of California’s northern latitude. In fact, Point Pelee, just a short distance away, is very close to the same latitude as Istanbul, Rome and Barcelona. 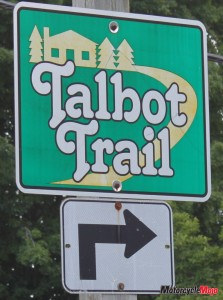 Passing through Port Bruce, we follow County Road 24 to 23, and then ride down the hill into beautiful Port Stanley, towards the giant Lake Erie Perch that tops the town sign. Right across the street, nestled against the cliff, sits the charming Kettle Creek Inn, our destination for the night. Jean Vedoda, the owner and Port Stanley’s greatest ambassador, greets us at the front door, bubbling over with enthusiasm, telling us all about her town and its rich history. We find out that this beautiful town is named after Lord Stanley, the very same who gifted his trophy, the Stanley Cup, to the National Hockey League. Originating in 1849 as a summer home for the local justice of the peace, the Vedodas bought and renovated the Kettle Creek Inn in 1983. We check in and later enjoy a magnificent alfresco dinner of Lake Erie pickerel in the garden gazebo. A perfect summer evening.

With the harbour as a backdrop, our evening walk along Main Street keeps us busy reading the many plaques outside historical homes and businesses. A plaque on the door of a peculiar little cement building tells us another unique story from the past. This is the last surviving kiln that was used to cure and varnish the cedar floats used for fishermen’s nets at the turn of the twentieth century. Locally plentiful cedar was much cheaper than imported cork. Across the street, fishing boats line the harbour, fuelled and ready to embark the next morning, long before any tourists are awake. In the background, the King George VI lift bridge, the oldest in Ontario, lifts to allow a sailboat to pass through. Unlike Port Dover with its boisterous ways, Port Stanley is a quiet refuge where one can relax in serenity and rejuvenate the soul.

One hundred years ago, much like other ports along Lake Erie’s shores, Port Stanley was a major fishing town. The streets were lined with fish houses, icehouses, and industry supplies. It is said that in those days, twenty-two operating fishing boats caught up to thirteen million pounds of herring per year. Fish were packed in ice and shipped as far away as New York and Philadelphia. Port Stanley was also a major point of entry into Canada from the United States for the United Empire Loyalists and the Quakers, and in 1850, Port Stanley was the seventh busiest port in Canada. Every dog has its day, and today, Port Stanley has reinvented herself, with a glimmer of the past showing through for the benefit of visitors.

Beside the harbour at the end of Main Street, a mural on the wall of Jackson’s Fish Market tells a story about the bravery of the Port Stanley Life Saving Crew. On October 29, 1902, they set out in a fierce Lake Erie storm to rescue the crew of the three-masted American schooner Mineral State, which had run aground near the high clay bluffs and was breaking up. After several trips, the ship’s entire crew was rescued by nightfall. As a result of this show of typical Canadian bravery, President Theodore Roosevelt presented gold medals to all seven life-saving crewmembers. The next morning, we take a detour through the quaint little village of Sparta on the Quaker Line. Canada’s only adobe blacksmith shop, built in 1827 and now a museum, still stands on the main street along with several other buildings from the days of the Quakers. Just west of Sparta, County Road 4 takes us north to St. Thomas, where we stop to see the statue of Jumbo the elephant.

The Fingal Line takes us out of St. Thomas, and after crossing over Talbot Creek, we find a monument to Colonel Thomas Talbot on the side of the road – all that remains of the both the village and the home of this innovative Ontario pioneer. At Wallacetown, we head west on the actual Talbot Trail again. I try to imagine what it may have looked like when Colonel Talbot first arrived, with the land completely covered in forest and Lake Erie abounding with fish of every description. What was it like to live then? The road is straight, and my mind wanders as I survey each unique, pristine farm. Roadside vegetable stands flourish, and field after field of bountiful crops stand, brilliant in their varying shades of green in the morning sunshine. How many stories could this land tell? We take a quick detour down Furnival Road to Port Glasgow, just so we can say we have been there, and then we are off to Blenheim and past the many cherry orchards, strawberry patches and tobacco fields. County Road 12 takes us out on a spit of land that juts into Lake Erie, past the onion fields on black earth reclaimed from the lake, on our way to Erieau.

The original dyke was built in 1943, and since then repairs and extensions have been built, with the last repair done after the flood of 1973. At the end of the road in Erieau, on the wharf at the inlet channel to Rondeau Bay, we pause for a break to admire the many sailboats and watercraft playing in the bright sunshine. The undertow here has claimed the lives of many an unwary swimmer over the years. Lunch at the Eau Buoy Galley fills the cavity, and we slowly exit this little summer haven and follow Dyke Road, passing many old cottages and homes, and wind our way back to the Talbot Trail. With only two more ports to visit, we ride along Highway 3 to Port Crewe, home to the Crewe Brothers Fishery. The 46-metre dock with barns, icehouse, twine shop and blacksmith shop has all disappeared, but between 1904 and 1957, the Crewe family owned a thriving business here. Port Alma is the last village with the name Port in front of it, and it is time to point our wheels north to our final destination of the day, Point Edward. Salvatore’s Trattoria Ristorante, right under the Blue Water Bridge in Point Edward, makes an exquisite finish to this wonderful weekend. You can choose from a small menu or simply tell them what you don’t like. They just start bringing you food, and you won’t be disappointed. It’s the best Italian food I have ever eaten! What a wonderful climax to a great ride through a boatload of Ontario history.