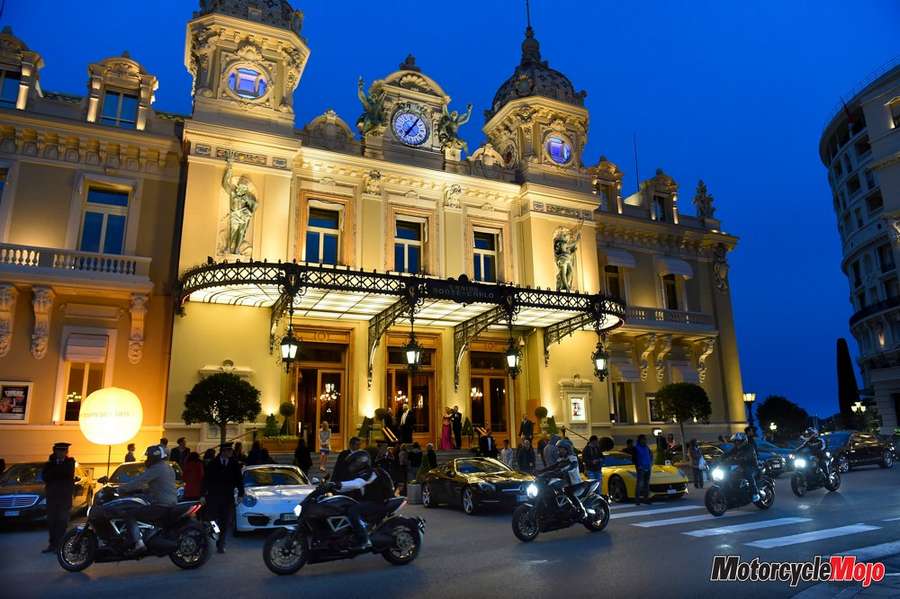 It’s not just for the rich and famous. The Diavel is a real attention-getter for the common rider

Several Bentley Flying Spurs, a handful of Ferrari 458s and even a couple Bugatti Veyrons are parked in front of the Hôtel de Paris, though it’s no special occasion. A Coke at the Café de Paris costs a paltry seven euros. If your bank account can take a heavy hit, you can take your chances at the Casino de Monte-Carlo just across the street, or you can spend a small fortune on an exclusive gift at Prada, Christian Dior, Chanel or numerous other high-end, high-fashion boutiques that line the streets. 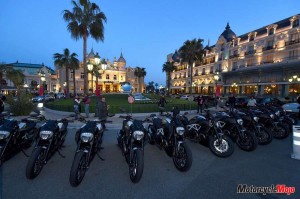 Ducati held the press launch for the 2015 Diavel in, the city-state that claims the highest concentration of millionaires and billionaires in the world. Moto journalists are usually corralled onto buses to the press briefing if it is held offsite from the hosting hotel, but in a brilliant PR coup, our Ducati hosts asked us to ride the bikes through the centre of town to the evening briefing location.

As droves of tourists filed by on the sidewalks, they seemed to show little interest in the surrounding, opulent displays of wealth. Instead, people pointed and waved as 30 thundering Ducati Diavels rode by; cell phones snapped away, fathers held up babies for a better view. “It’s a bike for people who want to command attention,” Ducati’s product manager, Paul Ventura, would say later during the briefing. He wasn’t kidding.

Ducati introduced the Diavel in 2009, and it was a radical departure for the Italian bike maker. It was a bold move for Ducati to design a power cruiser; the company is, after all, practiced in the production of sport and supersport machines. But the bike has done well for the brand, selling more than 20,000 examples to date worldwide.

The latest version has received numerous changes. Visually, several items distinguish it from the outgoing model, the most notable being the new LED headlight and the shorter exhaust. The Diavel is among a handful of new production motorcycles to come equipped with an LED headlight as standard equipment. The headlight was designed using technology developed by Audi, making the Diavel the first vehicle on which there’s a transfer of technology between the two companies (in case you haven’t been paying attention, Audi now owns Ducati).

The reshaped seat is flatter and uses new foam for improved comfort, but otherwise the riding position is unchanged. Numerous other small changes – mostly to trim pieces and finish – distinguish new from old. The mufflers have been shortened and slash cut, improving their appearance and exposing more of the wide rear wheel; compared to the old mufflers, they look like high-end accessory items. 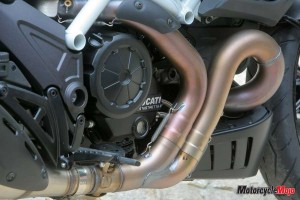 The biggest changes have been made to the engine, which is borrowed from the newest Monster 1200. It’s the 1198 cc Testastretta 11° DS (for dual spark). It now has two spark plugs per cylinder and a higher compression ratio (12.5:1 vs. 11.5:1), as well as revised engine mapping. Horsepower is unchanged at 162, but torque has been increased by 4.5 percent, most of the added torque arriving in the low- to mid-rev range. Maintenance will be less intensive, as valve clearance intervals have been increased from 24,000
to 30,000 km. Finally, there’s now a fuel sensor in the tank, so a gauge included in the TFT display gives you a heads-up on your fuel level before the fuel light comes on.

The amount of attention we’d received during our evening ride through Monte Carlo wasn’t surprising, considering the Diavel’s booming exhaust note. It’s not loud, but anyone within earshot will turn to look after it fires up. My test bike was a Diavel Carbon model, decked out with a front fender, fuel tank covers and passenger seat cover made from carbon fibre. It also has forged, nine-spoke wheels and brushed aluminum mufflers. It costs $21,995, which is a $2,700 premium over the standard model.

There’s no key to fire up the Diavel, but rather, a key fob that you can keep in your pocket; the bike will only fire up if the fob is in very close proximity to the bike. With fob in pocket, all you do is either push the kill switch down or hit the on button located atop the gas tank, just beneath the upper LCD display, to activate the ignition. You’re then ready to hit the start button and fire up the imposingly muscular V-twin.

The Diavel has a relaxed riding position that feels almost like a naked bike, but with a slightly more forward foot-peg position. The seat is deeply sculpted, so you’re pretty much dedicated to one riding position. At least it’s a comfortable one, which I proved capable of maintaining over a full day of riding, though we did make numerous stops along the sinuous route that took us through the southern portion of the French Alps north of Monte Carlo. Despite its naked-bike riding position, there’s no mistaking the Diavel for a svelte roadster; it’s a long, imposing motorcycle, and the Carbon’s claimed wet weight is 234 kg, though it still undercuts the Yamaha VMAX by an astounding 76 kg.

The cockpit includes two display monitors: a lower, colour monitor that displays the three ride modes (Sport, Touring and Urban) and other info, and an upper screen that shows speed, engine revs, engine temperature and time. 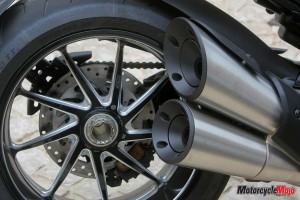 Heading out of the extravagant Monte-Carlo Beach Hotel and into the tight, winding and narrow streets of this tax haven for the rich, the first thing I noticed was the Diavel’s reluctance to lean freely. Its ultra-wide 240 mm rear tire gives the bike a preference for riding in a straight line, though I have to admit that Ducati engineers have done a fine job of managing its handling. The Diavel is way more nimble than the VMAX, and has much less of a tendency to stand up in turns than the V-Rod Muscle, which also has a 240 mm wide rear tire.

The mountains north of the city offered plenty of opportunity to pitch into a lean, and the machine handled tight switchbacks quite competently at a surprisingly spirited pace, without running wide at the exit, though I had to keep deliberate and constant pressure at the inside handlebar to keep it running tight. You get accustomed to this after awhile, and the reluctance to lean becomes almost invisible, though I suspect that in a swarm of true naked bikes and sportbikes, a Diavel rider would have to work quite hard to keep a quicker pace. It will walk away from a typical low-slung, feet-forward cruiser, though.

The best thing about the Diavel is its engine, which is a torque monster, yet quite manageable regardless of which ride mode is chosen. In Sport mode, power comes on with a George Foreman–like punch from low revs, and you can feel the seat bolster pushing on your backside like an impatient shopper in a grocery store checkout line as the bike accelerates. The engine pulls hard up the rev range and speed builds with surprising urgency, yet you can also take comfort in the fact that the supersport-spec monobloc Brembos will slow you down hard with the added assistance of ABS.

Ride modes are easily selected using the turn-signal cancel switch, yet I kept the bike mostly in Sport mode, which offered maximum power output, but with more aggressive throttle mapping than Touring mode. I did switch to Urban mode when wandering about in town, because its softer throttle mapping and limited output (100 hp) offered a much smoother ride when rolling over cobblestones and the various raised curbing that crisscrossed the pavement. Staying in either of the two other modes would cause the bike to lurch forward, as my hand would sometimes unintentionally jerk the throttle when riding over the pavement irregularities.

Alas, it was a relatively short ride at just 120 km, though it felt like twice that long due to the French Riviera’s high ratio of turns per kilometre. By nature, I would have preferred to ride a sportier machine through this area, but the Diavel handled better than the other bikes in its class (though, admittedly, there are few), and I never felt I had to restrain myself too much, as I would have on a typical power cruiser.

The Diavel is an acquired taste. Of all the bikes in Ducati’s line-up, it’s the only one that puts a greater emphasis on styling than on handling. This is why it has already appeared in two Hollywood blockbusters, The Wolverine and Jack Ryan: Shadow Recruit, and you’ll likely see it in more films in the future.
Fortunately, it backs its uncharacteristic (for an Italian make, anyway) styling with handling that’s well above the class standard, and a brutish engine that really does not disappoint. If turning heads is among your higher priorities when you ride, at least with the Diavel you can get the attention-grabbing styling without making too big a sacrifice in ride quality
or performance.