Return Flight of the Valkyrie

While still a heavyweight, this stripped-down, hot rod Gold Wing offers a flight down the road you may never forget

Few people today probably remember that the modern Gold Wing actually traces its roots to the GL1000, a standard, fairing-less bike introduced in 1975 that had a flat, four-cylinder engine. Over the years, it grew into a long-distance touring bike, it grew in displacement, and it also gained a couple of cylinders along the way.

It 1996, Honda decided to strip the fairing and saddlebags off the Gold Wing again, introducing a bike closer to the original GL1000 than any other model in Honda’s line-up since. That bike was the original Valkyrie. At the time, it used the Gold Wing’s 1520 cc, horizontally opposed six-cylinder engine, and it was a unique, large-displacement cruiser that has gone on to achieve an almost cult status among its owners. 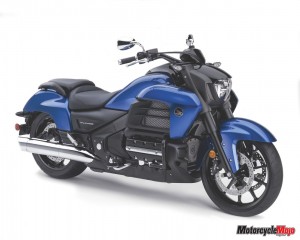 The Valkyrie was only around for six years, with production halting in 2003, though in a bold move that year, Honda introduced the outlandishly extravagant Rune, with styling that included an unusual trailing-link front suspension system. The Rune was never meant to replace the Valkyrie, but was rather introduced as a limited-edition styling exercise.

It’s been about a decade since Honda has offered a naked Gold Wing. That is, until this year, with the 2014 Valkyrie. This Valkyrie was designed to turn heads, and turn heads it does, as I discovered at its press launch, held recently in Temecula, California. As usual with Honda, only one version will be available in Canada – we only get the $19,999 ABS version, which also includes self-cancelling turn signals.

As with the original Valkyrie, this latest version is based on the Gold Wing touring bike, using its twin-spar aluminum frame and 1832 cc, flat-six engine. The engine is unchanged, using the same, unaltered five-speed transmission and shaft drive, but it has a retuned exhaust system and airbox, which are designed to produce a richer, deeper sound, especially when you twist the throttle.

Styling has, of course, been greatly altered, and although the Valkyrie is not as ostentatious as the Rune, it’s still much more avant-garde than the conservatively styled original Valkyrie – or anything else, for that matter. Two bulky side pods protect the side-mounted radiators, and the pods extend forward to either side of the fork, which itself is shrouded in a blacked-out nacelle. This gives the bike a bulky front end that is supposed to mimic the stance of a charging bull – at least, according to some design sketches we were shown during the technical briefing. The LED headlight has a small peak that combines with the small instrument pod to provide a bit of wind protection for the rider’s torso.

Chassis geometry has been relaxed even further than it already is on the Gold Wing, with a bit more rake, a bit more trail, and a slightly longer wheelbase. Wheel sizes are also up one inch in diameter compared to the Gold Wing, so you’ll find a 19-inch wheel up front and a 17-inch in the rear. This gives the Valkyrie a bit more cornering clearance and also lightens steering effort a touch.

A new sub-frame lowers the rear of the bike, and onto it is bolted one of the largest fenders, by area, of any motorcycle I’ve seen. The rear fender alone probably contains enough plastic to dress a couple of CBR250s. Under the fender is a longer, single-sided swingarm, which helps account for the added wheelbase. Unfortunately, its stylish single-sidedness is somewhat concealed due to the extended coverage of the massive rear fender and the large exhaust pipe. Oddly, from the rear, the Valkyrie looks more like a big scooter than a big-bore power cruiser. 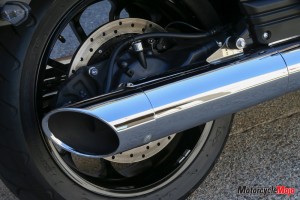 Despite all the massive bodywork, the only storage space available on the Valkyrie is a small, lockable compartment located on the right side of the bike, under the seat, that’s maybe large enough for a pair of gloves. There’s also a lock located on the rear of the left radiator pod, but its job is to unlock the gas cap remotely.

Regardless, the Valkyrie is a head-turner, and it looks particularly mean in blue, which features blacked-out trim. The only other colour available in Canada is black, though it has aluminum-coloured grab rails, fork legs and engine covers, and a chrome tank console. I think the black bike would have looked particularly menacing if it also featured a full blackout treatment on the trim.

Honda engineers want you to focus on the ride, so they took a minimalist approach to the cockpit, where you’ll find only basic controls and instrumentation. The LCD display has a bar tachometer, digital speedometer, dual trip meters, time and fuel level. On the left switch pod, you’ll find switches for the high and low beam, the turn signals and the horn; on the right, there’s a kill switch, a starter button and a hazard switch – and that’s all. There’s no ride-mode selection buttons, no suspension adjustment doodads – nothing that isn’t needed to ride the bike. Even the trip-meter buttons are old school, mounted on the gauge cluster itself. Honda’s diminutive Grom is not much simpler than that from the rider’s seat.

Suspension is also kept simple, with a telescopic fork and a single shock, both of which are mostly non-adjustable; the only adjustment you can make is via a remote, hydraulic adjuster for rear preload, located under the left-hand side cover.

Swing a leg over it, and you instantly realize that it is one massive motorcycle. Lifting it off the side stand only reaffirms your perception of mass, and it’s one of the few motorcycles I can recall that feels long even before you turn a wheel. The riding position is cruiserish-upright, and at 734 mm the seat is low, yet it’s still a modest reach to get both feet flat on the ground, because the bike has a rather portly midsection. Claimed wet weight is 343 kg,and although it’s no lightweight, it carries its weight low, and it undercuts the F6B by 43 kilos and the Gold Wing by 75 kilos. 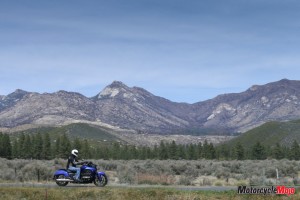 Although simplicity is part of the Valkyrie’s job description, practicality is not. Despite all of the real estate it displaces, if you want to carry your travel essentials (other than the requisite smart phone), you’ll have to pack a backpack; there are currently no touring accessories or luggage available through Honda.

The first thing you’ll notice once you get rolling is how planted and solid the Valkyrie feels. Its frame, after all, is over-engineered, having been originally designed to carry a Gold Wing–sized load. The slight flex you feel on a Gold Wing is completely absent on the Valkyrie. Steering isn’t light, but it is neutral. If you’re a habitual sportbike rider, you might experience a bit of a culture shock on this beast. The Valkyrie doesn’t turn so much as it deviates from a straight line. Winding along twisty roads is more of a subtle negotiation with physics, and the Valkyrie demands a steady, reserved approach to cornering rather than a forceful assault. It prefers a wide, constant arc through a turn rather than the frenetic cut-and-thrust line of a racer-boy bike. Take your time, ride on momentum, and you’ll find yourself in a tango-like dance. The Valkyrie does not weave, it does not wallow, and it has absolutely no tendency to wobble. Surprisingly, it can be cranked over quite far before the foot-peg feelers touch ground – altogether commendable for a power cruiser.

Despite its civilized road manners, it’s a blast just to roll back the throttle to its stop, which is an unusually long way around