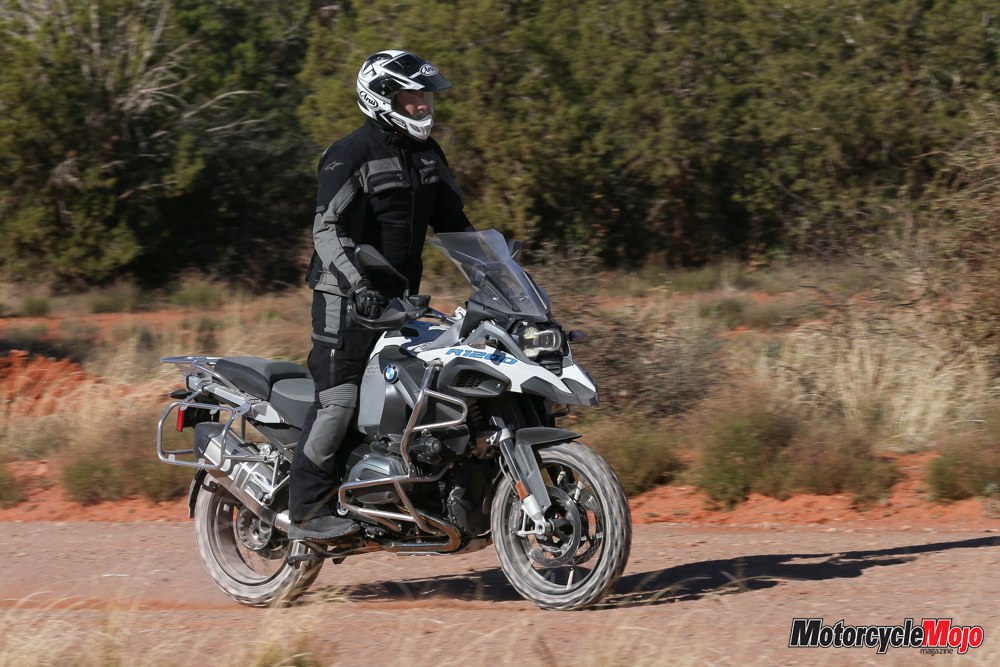 Even when rocks and ruts, sand and mud get in the way, the only thing that might hold this bike back is your riding ability

Few motorcyclists would refuse to acknowledge that the BMW R1200GS is the greatest adventure bike ever built. Its roots are planted in the machine that started the whole adventure-bike phenomenon in the early 1980s, when a couple of rally competitors decided to convert an R75/5 for off-road use and enter it in the Paris-Dakar rally. That bike inspired BMW to build the GS800 rally racer, which was followed by a tamer street bike, the R80 G/S, in 1980.

The sight of such a monstrous dirtbike in the dunes of Africa – that, and a handful of Dakar wins – sparked the imaginations of adventurous riders around the world, and the GS has since become BMW’s best-selling bike, and the world’s best-selling adventure bike by a considerable margin. The R1200GS Adventure, a dressed-up variation of the GS, first appeared in 2002. The R1200GS got a complete overhaul last year, receiving an all-new frame and the latest boxer engine featuring liquid-cooled heads and an integrated gearbox, while the Adventure model was still based on the previous-generation, air-cooled GS model. The R1200GS Adventure received its third-generational makeover for 2014, and the roads surrounding the spectacular, red rock canyons of Sedona, Arizona, provided the ideal backdrop during its press launch. 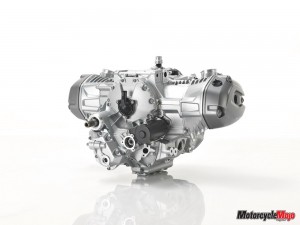 The new engine is actually only 35 percent liquid cooled, the remaining heat being removed by air passing over finned cylinders. It is easily identifiable by the vertical configuration of the intake and exhaust ports, which improves airflow into the cylinders. This arrangement also improves legroom, as the throttle bodies are no longer located ahead of your shins. The liquid-cooled, 1170 cc engine produces 15 more horsepower than the previous version. Power is now rated at 125 hp, and peak torque has increased to 92 ft-lb from 88, and it has a heavier, torque-enhancing flywheel.

The clutch has gone from the rear of the engine to the front, and is therefore no longer sandwiched between the engine and transmission. This means you no longer have to remove the transmission to service the clutch. The front-mounted, mechanically assisted, multi-plate slipper clutch is also borrowed from the GS. The driveshaft has also gone from the right to the left side of the bike, and the exhaust has done the opposite. The alternator has gone from a belt-driven unit above the engine to a crankshaft-driven unit behind the engine, and it pumps out 30 watts more power, at 540 watts.

The frame is now a one-piece, tubular-steel unit from which the engine hangs. There’s a bolt-on, tubular-steel subframe that supports the seat and tail section. Steering geometry is almost identical to the GS, with some minute changes in the rake and trail due to the Adventure’s taller suspension. The taller suspension combines with a taller, two-position seat to raise seat height by 40 mm to 890/910 mm.

Some other obvious changes include a taller, adjustable windscreen, tubeless spoke wheels, a 30-litre aluminum gas tank (up from 20 litres on the GS), and the addition of protective crash bars. Heated grips and switchable ABS are standard, as are selectable ride modes and traction control, the latter two offered only as options on the GS.

All of these additions boost the price to $21,600, an increase of $2,400 over the standard GS. Dynamic ESA is available as part of the $2,100 Touring Package, which also includes a more elaborate on-board computer, a pre-wired GPS mount, cruise control, fog lamps and saddlebag mounts. Knobby dual-sport tires are a no-cost option.

All types of riding conditions 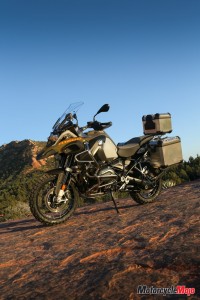 The Arizona weather forecast called for clear skies and temperatures in the low 80s Fahrenheit, and the planned 320 km route was run half on twisty pavement and half on unpaved roads. The first hint that our test ride promised to be adventure bike–worthy was that the bikes were equipped with Continental TKC 80 dual-sport knobby tires.

Before setting off, I set the seat to its taller position for added legroom and pivoted the aluminum handlebar in its risers a bit for a more comfortable reach while standing. I expected to do this later in the day, when our ride went off-road. Test bikes were also equipped with the optional touring package, making suspension adjustment a matter of hitting a button, thanks to the Dynamic ESA.

The boxer engine has a characteristic exhaust drone, but one difference between the GS and Adventure engines is that the latter doesn’t spool up as quickly when blipping the throttle, due to the heavier flywheel (and to some extent, to the heavier alternator windings).

There are two street modes (Rain, Road) as standard equipment, and three additional modes (Dynamic, Enduro and Enduro Pro) available as a $365 factory option. Each of the five modes has preset ABS and ASC (Automatic Stability Control) settings designed to match the riding environment. Modes can be selected while riding by using the mode button on the right-hand switch assembly, although if you are moving, you must shut the throttle and pull the clutch lever to confirm your selection.

All ride modes are ready except Enduro Pro, which only becomes available after the provided coding plug is inserted into its terminal under the seat. Enduro Pro is to be used with knobby tires, and it deactivates the ABS at the rear wheel for better control on loose terrain. ABS and traction control can also be turned off individually, and with the coding plug installed, the settings are retained if the ignition is turned off; otherwise, they come on by default every time the switch is turned on again. 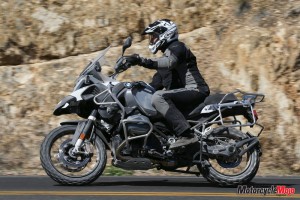 Since we began the ride on pavement, I started with the ride mode set to Road and the suspension set to normal and for a light load. The R1200GS is a large, tall machine, yet once you get rolling, it feels remarkably light for its size. This is truer since BMW introduced the liquid-cooled engine. This contributes to a lower centre of gravity, making the bike nimbler without removing any of its dead-steady stability.

The Adventure is taller than the GS, so it’s a longer way over the top when transitioning through switchbacks; however, it handles with near-sportbike agility on winding roads, especially when the ride mode is switched to Dynamic and the ESA is set to Hard. Even with the TKC 80s installed, a quick enough pace could be maintained on pavement to make a sportbike rider sweat trying to keep up, and although they roll smoothly on pavement, they slow steering down compared to more street-oriented tires. They are a fair trade-off if you plan to take off-pavement excursions regularly, but they are known to wear out quickly.

When roaming off pavement and equipped with proper dual-sport tires, the GS is among the best fire-road bikes out there. In Enduro Pro mode and with the suspension set to Soft, the rear tire could be spun up effortlessly to help steer the bike. Tightening up a turn on a dirt road is just a matter of feeding some more throttle. The bike’s momentum flows gracefully on winding dirt roads with confidence-inspiring feedback. I think the Adventure’s heavier crankshaft makes a difference, and the bike is probably easier to manage in these conditions.

Even when the going got tougher for us that day, with rocks and ruts thrown into the mix for excitement, the Adventure just soldiered on, soaking up the bigger bumps competently, with a solid, planted feel. Of course, it’s no enduro bike, despite two such modes, and you’ve got to maintain a modest pace or you can easily find yourself over your head. But the Adventure can manage a brisk off-road pace with ease, and there’s a sweet spot at around 60 km/h on the rougher stuff where it rides almost effortlessly. Below that speed, you find yourself fighting the bike and bouncing around; too much faster, and it’s just too big to manage. I kept the ABS and ASC on throughout the ride, and when in the proper riding mode for the conditions, I never found the need to turn either of them off.

It takes a beating

The Adventure’s spoke wheels are less prone to damage than the cast items on the standard GS, while continuing to be easy to service in case of a flat. I experienced this firsthand after a rock punctured my rear tire on the way back to the hotel. Because the wheels are tubeless, the tire was repaired with a rubber plug, and I was back on my way in minutes. The bike’s tire-pressure monitor was quite handy in this situation, providing a visual warning before I felt that there was a problem.

The R1200GS Adventure is more expensive than the standard GS, and it’s taller, too, which will be a hindrance if you’re a shorter rider. But it is more desirable, especially if your idea of a long-distance tour includes more gravel than pavement. It is completely capable of handling extended off-road excursions, as demonstrated during the recent GS Trophy, which was held in Alberta and British Columbia. It proved to be the most challenging Trophy event to date, covering 2300 kilometres of sometimes very challenging terrain. Ninety R1200GS models took part, and aside from a few flat tires, no mechanical issues were reported.

If you’re considering buying an Adventure, I recommend you opt for the ESA. It’s an excellent addition, although unfortunately it is not available as a stand-alone option, which would have reduced the cost. Not only is the ESA suspension compliance among the best I’ve experienced, it instantly transforms the bike for road or off-road conditions – as you ride – and it offers more adjustability than the standard suspension setup.

The BMW GS is the bike that started the adventure-touring class more than three decades ago. This latest Adventure model has earned its name through countless miles of desert, across mountains, and even on the city streets of the urban jungle most riders call home. If you’re planning a cross-country trip and your route takes you mostly on unpaved roads, the R1200GS Adventure is more than ready to live up to its name.