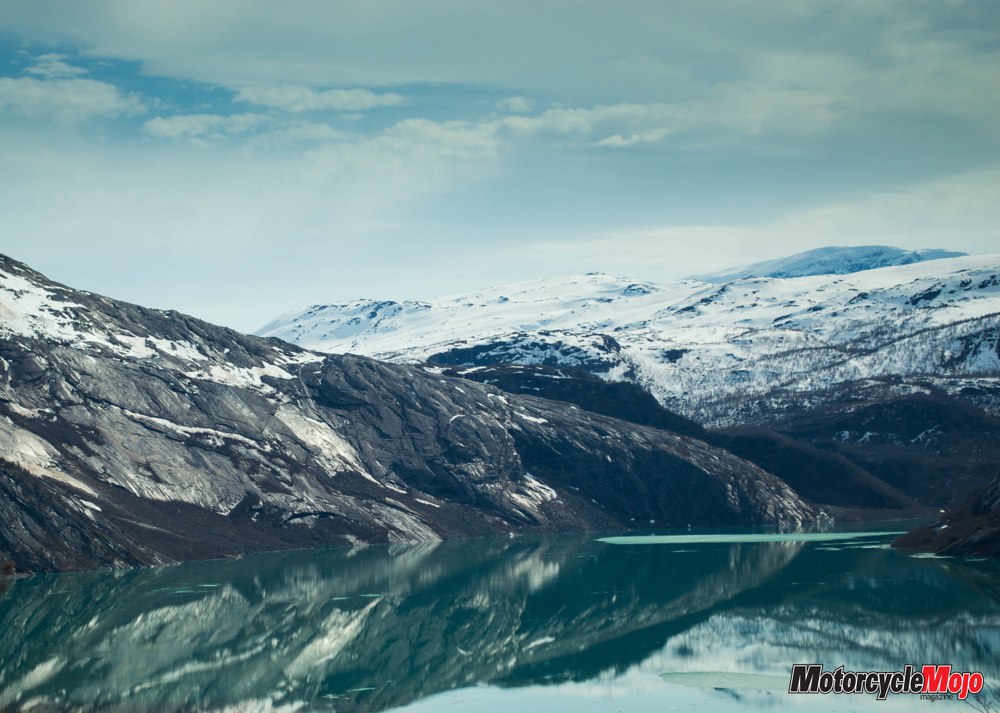 A Norwegian motorcycle tale of shockingly beautiful scenery, winding mountain roads, freezing temperatures and almost getting blown off of cliffsides

My tent is shaking heavily from the wind outside. The poles are stretched to the limit, and they squeak and bend constantly. It’s 2 a.m., the midnight sun is preventing me from sleeping, and it is very cold. I am four hours away from Nordkapp, Norway, in a little town called Alta. I was supposed to reach Nordkapp today, but a blizzard in the mountains made that impossible. Nordkapp is putting up a fight.

I’m on a motorcycle expedition around the world from Africa with my trusted Yamaha Super Ténéré, and Norway’s Nordkapp has been my main target (and, as it turns out, my nemesis) from the beginning. I entered Norway from the south, at the beginning of May, and I’m now into the fourth week of the month. Some say it was the perfect time for the southern fjords, and the worst time for reaching Nordkapp. Nothing could have prepared me for this kind of environment or its shocking beauty.

Once I passed Oslo, Norway’s large but compact capital (the second most expensive city in the world, next to Singapore), I headed to Hardangerfjord, a popular destination for cruise ships. The road winds beautifully through the mountains (as most roads in Norway do), showing off the snow that is present until late June. I was in a dream, as the motorbike purred and happily tackled every tight corner and mountain pass. It’s hard to concentrate on the road when you are surrounded by lakes that mirror perfectly the mountains above, rivers so green in colour you think someone has photoshopped them, long tunnels opening up the belly of the mountains, and on the other side, valleys filled with blooming cherry and apple trees in the thousands. Extreme changes in temperature, from 2 degrees Celsius on the mountains, to 20 degrees at the base of the fjords, proved that the weather is as dramatic as the landscape.

How much did you say? 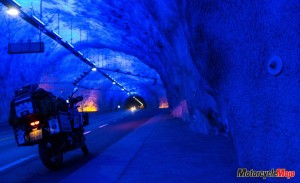 Norway is among the most expensive places to live or travel: fuel costs more here than anywhere else in the world ($3.00 CAD per litre), and products like eggs, bread and milk cost more than double what we would pay in Canada. Prices are so outrageous that many Norwegians cross into Sweden to purchase food, merchandise and even to have their vehicles repaired. Despite the cross-border spending, Norwegians are a proud, self-sufficient people; they exude confidence, and their genius can be seen in the country’s infrastructure, architecture and design.

What shocked me the most, as a biker from Canada riding more than 3000 km in Norway, is how the Vikings tamed this wild and rocky land and made it accessible by air, road and sea all the way to the Arctic Ocean in the north. I traversed 16 mountain passes – the highest at 2200 metres – rode through many tunnels, including the Laerdal Tunnel, the world’s longest at almost 25 km as it bores through the granite of massive mountains, and all the while I wondered how difficult it has been for the Norwegians to conquer this extreme environment. Even now, with good roads and service areas, it was an impressive and very humbling experience to ride a motorbike in Norway.

From Hardangerfjord (the fruit belt of the country, supplying 60 percent of the national fruit demand, with over 400,000 trees crammed into a space of about 30 km), I rode through massive mountain chains to a small and narrow fjord known as Geirangerfjord. Positioned spectacularly between two vertical peaks, its clear waters are not stirred by even the slightest wind. I was expecting to see a giant mythical creature, perhaps a troll, reveal itself at any moment. The village of Geiranger is small, but it hosts hundreds of thousands of tourists every year, as it is one of the most popular cruise-ship destinations in the country. Another of the Geiranger attractions is the local Jordnaer Chocolate Company. This was started by a former physiotherapist who decided that he wanted to do something exciting with his life. He calls his creation “chocolate with a view,” not necessarily because it is made on the beautiful fjord, but rather because it is “chocolate with a point of view,” since he combines strange tastes: blue cheese chocolate, whisky chocolate, Gouda chocolate, and so on. Apparently, it’s so famous here that they include it on their list of “100 things to eat before you die.” Bengt, the owner, was one of the four people who spoke to me in more than three weeks in Norway. Norwegians seem to be wary of speaking to strangers.

The road from Geirangerfjord rises sharply to the mountain peak, with extremely tight curves snaking their way to the top. I rode in third gear, and even down to first gear, in order to navigate the road. From sea level, I arrived at the mountaintop in about 15 minutes, climbing more than 1400 metres in that time. It’s a dizzying experience.

Next was Trondheim, with its colourful houses on stilts that line the channel all the way to downtown. The appearance of the town’s beautiful cathedral and university gives this community a uniquely northern touch. It felt good to walk the streets of the city for two days and not see high mountains. 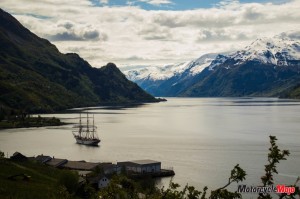 From here, the road was straighter, and as I headed to Mosjøen, the weather hinted that I was approaching the true north. Bitter winds, low temperatures and freezing rain battered me all the way to Mosjøen.

From Mosjøen, I passed through Mo i Rana before reaching the Arctic Circle, where the snow was about three metres high and it was bitterly cold. It was a lonely place up in the mountains, and the arctic visitor centre was open, but empty. The girl at the counter told me that it was way too early for visitors. This had become the motto for my journey to Nordkapp: Way too early!

Next was Narvik fjord, where I camped wild for the first time in Norway. Scandinavia has a system called Right of Access, where you can camp in any place that is not private property or cultivated, and make use of the local resources free of charge: fishing, collecting firewood, picking berries and other edible vegetation are all allowed. It is a great way to show respect for nature, but due to the cold, this was the only chance I had to use this system.
From Narvik, the landscape changes dramatically to a real Arctic environment: round-topped mountains, lots of snow and desolate places. Villages are fewer and farther between, and even the smell of the air is different. It reminded me of my Nunavut expedition a few years back. I reached Alta in the late afternoon and pitched camp at Alta River Camp. Nordkapp was looming beyond the horizon, and I shivered, thinking of what might wait for me there.

A snowbank is better than death 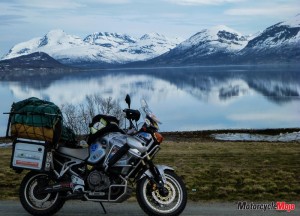 At 5 a.m. it’s 1 degree outside and 70 km/h winds batter me as I pack quickly to avoid freezing before I even start the day. I head out at 6 a.m. on desolate roads with quite a bit of ice on the tarmac; I am the only one on the road. As I leave the camp, I look toward the mountains and see that they are covered in low, dark, ominous clouds.

Climbing the mountain pass in second gear, I have both feet down to counterbalance the strong side-wind that tries to push me off the road. The going is slow, challenging and downright dangerous. As I round the top, I suddenly come upon ice on the road, while doing about 60 km/h. I try to reduce my speed by down-shifting, but it’s not enough; the wind pushes from the right side and my knobby, dual-sport tires don’t provide enough grip. Now I’m sliding fast toward the drop on the left. At the last moment, I spot a snowbank out of the corner of my eye, and head straight for it. I hit the snow hard – and stop. Better here than off the side of the mountain. I look up and down the road, but there’s no one in sight. The wind is blowing hard, and the noise it creates in my helmet adds to my stress. Breathing deeply to calm myself, I try to figure a way out of this mess. The bike can’t be pushed out in either direction, so I start digging the snow from around the wheels. With a path cleared, I jump back on the bike and open up the throttle, letting the power of my Yamaha claw me back onto the road. I complete the rest of the mountain pass in second gear, both feet down and shaking; cold being just one of the reasons.

Every kilometre I cover toward Nordkapp is buried in my subconscious. I am already frozen and I still have a hundred kilometres to go. As I pass Olderfjord, the road narrows, and it’s squeezed between the churning sea on the right and the high, broken cliffs on the left. I slowly inch my way toward Honningsvåg, the last community before Nordkapp. Just before Honningsvåg, I encounter the North Cape Tunnel. At almost seven kilometres long, it reaches a depth of 212 metres below sea level, under the Magerøysundet strait between the Norwegian mainland and the island of Magerøya. The subterranean wind forces its way through my gear, and doubts of ever reaching Nordkapp begin to take over. Midway through the tunnel, I reach the breaking point. I slow and make a U-turn, then bring the bike to a complete halt and shut it down. It’s dark, lonely and very cold.

At that moment, I had made my decision to stop the madness and head for Finland, but when I started the bike and put it back into gear, there was something coming out of the depths of my soul, a rebellion of some kind, forcing me to reject my natural instinct and to go against my will. I turned the bike around, more determined than ever, and resumed my course for Nordkapp. I left the tunnel with only 13 kilometres remaining to the North Cape.

From Honningsvåg, the road narrows as it climbs the last mountain before the Cape. It’s about four metres wide, and the wind, unrestricted by any trees or obstacles, pushes me dangerously toward the cliff’s edge.

I reach Nordkapp at 10:45 am, 24,525 km from my African starting point in Livingstone, Zambia, and 3100 km from the southern border of Norway. The young man at the gate is, of course, shocked to see a biker at this time of the year. He welcomes me to Nordkapp and says “200 kronor to enter” (about $40). If I strangle him now, I thought, it won’t help much. The boy just works here. I politely say, “I’ll just turn around.” Just One More Before leaving, I climbed off the Super Ténéré to take a photo, but the winds on Nordkapp were so strong that I couldn’t move away from the bike. I took the photo while pushing with all my strength into the bike with my left leg, and then climbed back on and headed south for Finland. Frozen, wet and miserable, I crossed the Finnish border filled with awe, amazement and respect for the country I just rode in. Norway is by far the most shocking country I have ever had the privilege of visiting. If you are lucky enough to ride your motorbike in Norway, you will learn a great respect for the spirit of the Vikings that roamed this country since time immemorial. I know I did! John Nomad writes about his RTW expedition at nomadsportsacademy.com.