» December 2014, Travel » Exploring the Land of the Scots

Exploring the Land of the Scots

Story and Photos by Katja and Jens Witte

There’s the unmistakable smell of the sea in the air. We look up to watch seagulls screaming as they circle, and great plumes of smoke being drawn out of the ship’s funnel and into the blue sky. Standing at the ferry terminal in Ijmuiden, near Amsterdam, we wait for our ferry to set sail to the English port of Newcastle and for our Scottish affair to begin.

We have barely taken off our helmets before we are treated to the company of Chris, Mike and Alan – three true-blooded Scots. They’re on the way home after finishing a tour of the Mediterranean on their Hondas. We quickly get chatting, and it’s soon clear that their insider travel tips are better than any pre-planning we could have done. Straight away, Mike has his atlas in hand, and his finger positively flies over the map. “It’s made for riding,” we hear each time his finger settles briefly on a destination, before it wildly zigzags over the map to another corner of Scotland.

The crossing to Newcastle is quiet and pleasant, allowing us to process the treasure trove of information gleaned from our new friends. Upon disembarking the ferry on our BMW R1200GSs, we are met with our greatest challenge of the next three weeks: driving on the left hand side of the road. Things are a lot easier if you initially follow the example of the locals, but dealing with roundabouts appears particularly treacherous. During those first 50 km to Scotland, we are concentrating so hard that our surroundings fly past unnoticed. 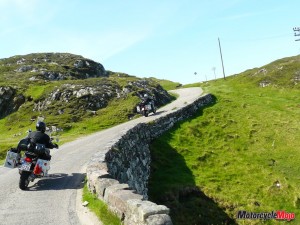 The Scottish border could easily be overlooked, were it not for the tourists. To fulfill every cliché, a piper stands at the border stone and allows photographs for a small fee. The bus full of tourists does not need to be told twice. The poor piper is shown no mercy and is soon surrounded, so that others have almost no chance of a photo.

The roads become narrower, and we ride through idyllic countryside on the way northward, toward Edinburgh. Along the way, we make a short detour to Dryburgh Abbey – one of Scotland’s most beautiful abbey ruins. At the centre of a beautiful park, we find the remains of this formerly magnificent abbey building. The famous Scottish writer Sir Walter Scott was so impressed by this corner of the earth that he decided to make the already ruined walls his final resting place. And so, here we stand in front of his grave, listening to the birds singing, saturated by the peace, in complete understanding of his last wishes.

We set off for the Scottish capital, and after only one day of driving on the left, plunge into the hustle and bustle of the city. The connected roundabouts, with up to five lanes and nine exits, take our entire concentration. The GPS says something about “turn left at the eighth exit” – ok then, let’s go!

Arriving in the centre of Edinburgh, the sound of bagpipes floats over the Royal Mile as we make our way to Edinburgh Castle. The castle lies high above the city on the basalt cone of an extinct volcano. The old walls exude medieval charm and offer insight into the eventful history of Scotland. In addition to the crown jewels, the Stone of Scone (the coronation stone) is also housed here. One could easily spend a whole day in this huge complex, but we want to see more of the city, and so we wander toward Edinburgh’s historic Old Town.
Sweet Sidetrack

Having found some time to spare, we head off to explore a route recommended by Mike, one of our Scottish friends from the ferry. The A702 leaving Edinburgh is covered with the finest tarmac, and we swing southward with every curve. The thermometer climbs to 20°C, and the sun smiles down on us. While stopped at a car park, we awaken the interest of a local man, who chats with us. He recommends we visit the Moffat Toffee Shop, just down the road. Of course, we are happy for the advice, and after a few kilometres, we reach the Moffat town centre and the shop of every child’s dreams. As if transported back to the 1950s, we see walls covered in endless rows of jars filled with sweets of every kind stretching out before us. And here, too, we find the famous Moffat toffees: absolutely unique, homemade and only available here. At the back of the shop, we discover a terrific selection of Scottish whiskies. The range is almost too much for the average person, but the advice and explanation from helpful staff has us sorted in no time.

We reluctantly tear ourselves away from the friendly turmoil and take the A708 north from Moffat in the direction of Edinburgh. The road is considerably narrower than the A702, and the landscape is even more green and lush. During our ride through hills and woodland areas, we’re repeatedly encouraged to overtake the cars and trucks in front of us; however, care is needed with the sheep, as they are unwilling to move aside voluntarily.

The tour continues northward via Dundee and Montrose. While the coastal road is not a particularly thrilling ride, we quickly make headway and enjoy the view of the east coast. Shortly before Aberdeen, we take a break at Scotland’s most impressive building, Dunnottar Castle. The ruin stands on a cliff in the breakwaters of the North Sea and is only accessible by a narrow, steep footpath. There is a fantastic view here in brilliant sunshine, and we enjoy the atmosphere while lying on the luscious, thick Scottish lawn.

From Aberdeen we continue inland, and pay a short visit to the summer residence of the British royal family. Only five minutes further on from Balmoral Castle, we join the A939 and the first real single-track road of the trip. We follow this to the heart of the Highlands, stopping again to let our eyes wander. The wind whistles around our ears, and the sky is overcast. Far and wide, there is not a house to be seen, and we only rarely meet another person. This is Scotland as we imagined it: lonely and bleak, yet endearing.

Monster with a Side of Chips 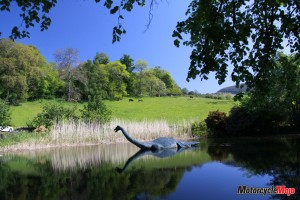 We orient ourselves and ride southward again in the direction of Inverness, along the bank of the famous Loch Ness. The first impression is a bit disappointing. Somehow one expects something special here, given the lake’s unique history. We looked for a place to set up camp, preferably with a view of the loch. The selection of campsites that also accept tents is, however, unexpectedly limited. We are forced to travel the entire length of the loch, until we eventually arrive in Fort Augustus, a small village on the Caledonian Canal. With bikes and gear stowed for the evening, we head out on foot and find a snack bar frequented by the locals. With the happiest serendipity, our little detour soon finds us by the side of the canal, dining on possibly the tastiest fish and chips in the whole of Scotland. Before returning to our tent, we pay Loch Ness another visit. In the fading light of dusk, the loch appears more as we had expected: serene and almost mystical.

We ride via Inverness East to Forres, and on to Speyside, Scotland’s largest whisky region. Only a few miles south is the Dallas Dhu Distillery. The distillery was closed in 1983 and reopened as a museum in 1988. We become well informed about the production of the renowned Scottish tipple, and at the end of the tour, we are rewarded with a wee dram of their finest.

With our informative and tasty detour completed, we ride north under a bright blue sky, surrounded by meadows with the coconut scent of gorse wafting into our helmets. Motorcycling in Scotland is proving to be a treat for all of our senses.

Our next waypoint is John O’Groats, often wrongly called the northernmost point of Scotland. However, this is only the northernmost house in Scotland. Only a few miles further west on the Dunnet Head peninsula, we visit the truly northernmost point of Great Britain. Here, we have a superb view of the Orkney Isles, situated off the coast. The wind is strong, and the wild sea breaks onto the cliffs. We would have loved to stay for a little longer and soak up the atmosphere, but it is already growing late, and we get on with looking for a campsite.

We put up our tent shortly after the village of Dunnet, amongst its shoreline dunes. As we breakfast in front of the tent, an elderly Scottish gentleman approaches us with morning greetings. Before we know it, the smiling man is sitting with us and poses the repetitive questions – where from and where to? He then suggests a few routes for the next leg of our journey. Among them is the Drumbeg Road on the West Coast; an absolute must, especially for bikers. After a long, but amusing and informative breakfast, we set off on a tour through the interior of the country.

After Ullapool, we keep to the right and point our GSs to the B869. Here, we follow the recommendation of the elderly gentleman from the campsite; we ride in the direction of Drumbeg. A posted recommendation that campervans avoid this road is not without reason. The road skirts the coast and winds sharply along cliffs and around escarpments, presenting breathtaking views of the Atlantic and the many small islands off the coast. It is like being on a rollercoaster as it goes up and down along the coast, with inclines of up to 25 percent. On occasion, we would round a bend and come face to face with the headlights of an oncoming car. Thankfully, everyone is very considerate, and the cars happily reverse to let our fully loaded bikes past. 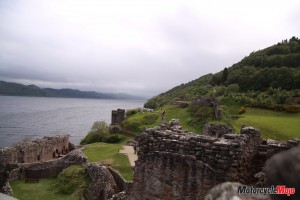 West of Loch Carron, the way leads to Great Britain’s highest pass – Bealach na Ba. This pass winds, single file, up to 626 metres. With its tight, hairpin bends and steep grades, the pass is reminiscent of the Alps and brings the Highlands even closer to our hearts. From the top, views sweep out over the borders of the mainland. After a short rest, we descend again on sweeping curves that carry us to the renowned local pub known as Applecross Inn. It’s time for a late lunch, and we have not yet tasted all the well-known Scottish specialties, such as haggis. The Scottish cookbook author Paul Harris wrote in one of his books regarding haggis: “The following recipe is not for the faint-hearted!” Before the first bite, you must forget about the ingredients of this traditional dish, especially if you are not a particular fan of offal and the like. The waitress’s smirk while serving us the haggis does not help. With ambitions aroused and a fixed smile on our faces, one of us mutters, “Well, one has to get used to it.” This lasts for another three bites, and then it is over. The experiment is off, and jealous looks are cast toward the other plate with the fish and chips.

Following this culinary detour, we visit Scotland’s most photographed fairy castle, Eilean Donan, made famous by the Highlander films. Soon, the sun disappears behind the backdrop of the mountains while we sit on the lakeshore and listen to the splashing of the water. If you concentrate hard in these silent surroundings, you can still faintly hear the clanging of the swords, just as in the sixteenth century.

Back in today’s world, our path takes us to the largest of the Scottish Isles. Using the bridge at the Kyle of Lochalsh, we drive onto the Isle of Skye. Riding north on the A855, we enjoy a wonderful view of…