Home / Issues / January/February 2015 / Staying ahead of the class 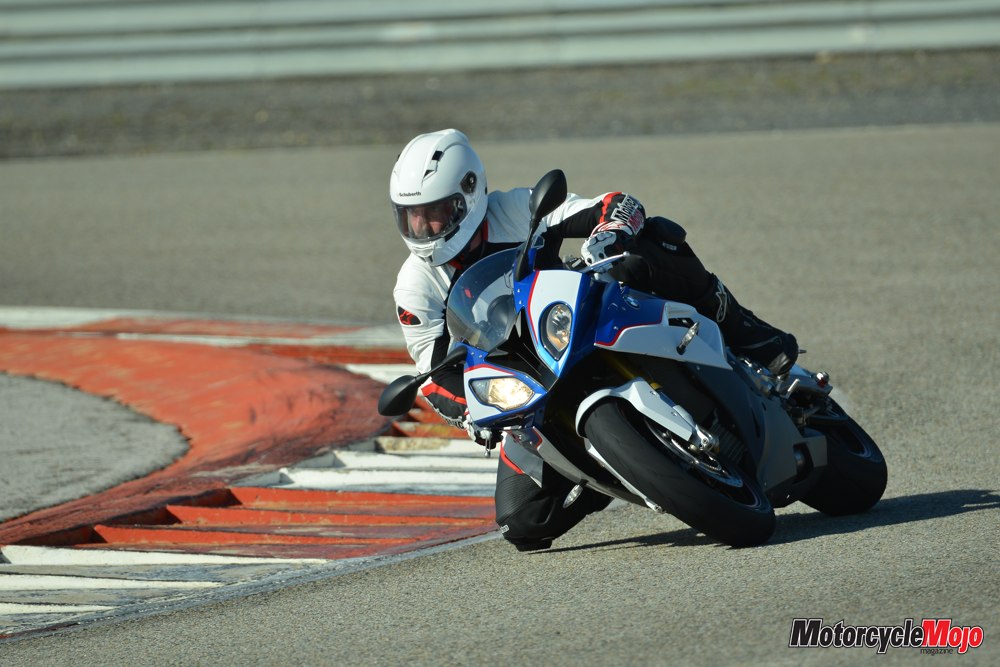 For their first foray into building a supersport machine, bmw knocked its competition out of the ring when the german bike maker introduced the s1000rr in 2009. The bike produced about a dozen more horsepower than its nearest competitor, and it matched or exceeded the handling of the best bikes in the class. It also came with an unmatched electronics package that included adjustable traction control and adjustable race abs as standard equipment. And to make things even tougher on the japanese, the s1000rr was priced competitively, even if you didn’t factor in the additional horsepower or electronics.
It was clear the company had a winner, and according to bmw, the s1000rr now represents 22 percent of open-class supersport sales worldwide. That’s almost one-quarter of all supersport machines sold, from all manufacturers, and it has done so without the benefit of brand loyalty, because it’s not brand loyalty that sells supersport machines, it’s the performance numbers.

Motorcycle mojo was invited to ride the redesigned 2015 s1000rr at the bike’s recent press intro, held at a tight, point-and-shoot racecourse about 45 minutes west of seville, spain, called circuito monteblanco, where we discovered the latest s1000rr will not disappoint the converted.

More than a facelift 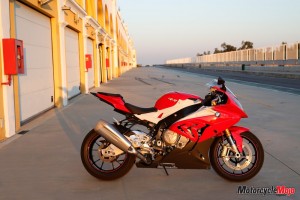 Since horsepower reigns supreme in the open supersport class, it’s natural the s1000rr received more of it. It claims 199 hp, an increase of 6 hp over the outgoing model. In fact, the new rr claims 187 hp in rain mode.

Horsepower isn’t everything, though, and torque has been increased from 5000 rpm upwards for a much broader powerband than before. Near maximum torque is available between 9500 and 12,000 rpm. The extra power comes from a new cylinder head with revised ports, new intake cams, a larger-volume airbox and lighter intake valves. There’s also a new higher-flow exhaust system that has lost the under-bike muffler, as well as three kilos. A total of 4 kg has been removed from the s1000rr, with the company now claiming 204 kg wet.

The bodywork is very familiar, but you don’t need a keen eye to notice that the asymmetric headlights have swapped positions; the high beam is now on the left. Other changes include optional heated grips and optional cruise control, a first for a racetrack-bred machine.

Electronics are a necessity

One of the most important features of the s1000rr is its unsurpassed electronics package, and with bikes now hovering around the 200 hp mark, electronic intervention has become a necessity. There are three basic ride modes (rain, sport, race), and two pro modes (slick, user) for the racetrack that require using a coding plug. The basic modes are meant to be used with street tires and include factory presets for the abs, traction control (without bank angle sensors) and wheelie control. The pro modes, meanwhile, are intended to be used on the racetrack, and let you select from seven plus or minus levels of dynamic traction control (dtc) with bank angle sensors for high accuracy. Wheelie control is also shut off in the pro modes. As on the previous model, you can select modes while riding, but now you just have to shut the throttle to confirm your selection; there’s no more need to pull in the clutch. 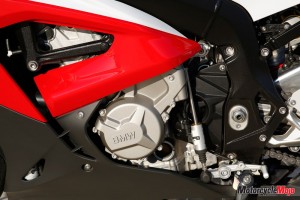 While the pro modes are optional in other markets, they will be standard in canada, as will be the dtc and electronic shift assist, which allows clutchless up and down shifts, blipping the throttle automatically when gearing down. Within the slick and user modes, you also get programmable launch control and a programmable pit lane speed limiter, just as on race bikes.

The lcd instrument cluster has a plethora of information available, most of it catering to the track rider. Available info includes abs, dtc and, if so equipped, ddc data, and you’ll find items such as current and maximum bank angle, maximum deceleration rate, lap times and gear changes per lap, as well as a host of other info, that will make your track-day sessions more complete.

If you take your track-day experience seriously enough to bring an enclosed trailer, pitch-up tent and umbrella girl, you’ll want to invest in the accessory data acquisition system and its accompanying software (windows-based). The system ties into the bike’s computer and uses gps to log everything from throttle opening to brake pressure to lean angle, as well as way too many bits of track-related info to mention here. The data can then be downloaded to a usb key after a lapping session, and then scrutinized on your computer. At press time, canadian pricing wasn’t available for this bit of kit, but it retails in europe for 600 euros. 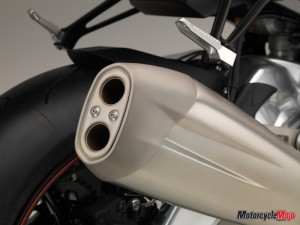 Our test bikes were equipped with all the optional goodies, logging lap times and data as we rounded the tight racecourse. Cool morning sun draped the circuit, though overnight rain had left the surface wet, and since i’d unwittingly volunteered to join a “fast” group of american and german riders led by former german 250gp rider jürgen fuchs, the first session would prove an ideal environment to test rain mode, as well as my nerves.
The pace was surprisingly fast for the conditions, with a mist spraying off the brand new, un-scuffed Pirelli Diablo Supercorsa radials. I felt completely comfortable, however, putting my faith in the softened throttle response and heightened traction control intervention of Rain mode. Although we kept lean angles within reason on the damp pavement, nothing felt out of the ordinary, even when applying more throttle than I thought was prudent. The only indication that a microchip was looking over me was the DTC warning light, which flashed considerably when exiting corners. As the track dried under the sun and the pace picked up, the bike wallowed just a bit in the rear at corner exits, a result not of a slipping rear tire, but rather of the soft Rain mode suspension settings.

Switching to Race mode in the second session resolved this. Power also came on much harder and there was more of it available. The engine refinements have indeed made the S1000RR more manageable, and there’s a good dose of midrange, allowing brutally hard corner exits.

The tight track layout meant most of the circuit was negotiated in second and third gears, grabbing fourth and fifth only on the 960-metre-long front straight, where the bike managed a data-acquired 256 km/h before hitting the brake marker (the speedometer indicated 268 km/h).

The clutch was used only when leaving and entering the pits; otherwise, shifting was done without it. The electronic shift assist works exceptionally well, and is a real boon when slowing down for corners. It relieves the workload by allowing you to focus on hitting the brakes and pushing down on the shifter. The automatic blip is minimal, but just enough to make downshifting smooth and effortless – just hit the brakes and click down with your left foot. The only hitch in the system is that the bike won’t downshift without the clutch unless the throttle is completely closed.

Another factor that reduced my riding workload was the semi-linked race ABS. At this press launch, I relied for the first time ever solely on the front brake lever when lapping. I know there are countless riders out there who never touch the rear brake on a racetrack. I’m not one of those riders. I rely on the rear binder to assist corner entry and stabilize the machine, even if it only provides nothing more than moral support. With BMW’s semi-linked system, I just ignored the brake pedal without having to make any other adjustments in my riding style.

Braking is very strong, but because of the added hardware required for the semi-linked system, the bike did exhibit some brake fade, with the lever coming closer to the handlebar nearing the end of a session. This never posed a problem and can be easily remedied with high-temp brake fluid.

The Ultimate in BMW Power

During the morning press briefing, we were told that if the weather held out after lunch, we’d get a chance to ride the bikes with BMW’s accessory forged wheels installed. At first I found this odd, not quite grasping the need to test a set of lighter wheels. What the folks at BMW neglected to mention was that onto those wheels would be mounted a set of Pirelli Diablo Superbike race slicks – a first during a press launch, for me at least.

The final two sessions were done in Slick mode, on race slicks, and with the DTC set to level 2 for minimal intrusion. This setup transformed the S1000RR into a beast, albeit a relatively manageable one. Fierce acceleration carried the bike between corners, and the front wheel often left the ground in second and third gears. Fortunately, when the front wheel did part company with terra firma, it didn’t do so as if a stick of dynamite had gone off beneath it. The wheel just lifted swiftly until enough throttle was rolled off to maintain the wheelie; eventually the wheel dropped on its own. Being that my right hand isn’t subtle enough to do this consistently lap after lap, for the most part I avoided wheelies by twisting the grip more judiciously, or sometimes by short-shifting the bike. This wasn’t an issue in Race mode, as the front wheel would lift, but the bike would do the balancing act on its own.

Until the first S1000RR came along, the only European manufacturer to produce an inline-four, open-class supersport machine was MV Agusta, though as beautiful as the F4 was, it didn’t really match the Japanese machines in performance. BMW had jumped into the arena with fists-a-flying, and when it did, it led the way in performance and technology.

Whether it keeps its reign over its supersport competition, only a head-to-head comparison will tell. And things are heating up in the arena, with the new Yamaha R1 claiming 198 hp, and the new Ducati Panigale 1299 claiming 202 hp. I think the BMW will do quite well nonetheless. The 2015 S1000RR will arrive in dealers in the spring, and although pricing has not yet been released, BMW Canada’s Rob Dexter says it should be very close to current pricing, which starts at $17,650.
If you spend many a weekend lapping with your friends at local track-day events, BMW’s latest supersport will not disappoint. Should you also invest in all the optional go-fast goodies, including the data acquisition system, you’ll be very close to experiencing a factory ride, sans umbrella girl.