Sammy Miller’s whole life has been spent around motorcycles, and although he doesn’t race anymore, that doesn’t mean he has slowed down

The misty Hampshire morning creates an eerie feeling as we follow the winding, narrow Bashley Cross Road through the southern edges of New Forest National Park. The strip of pavement, bordered by native hardwoods, is only interrupted occasionally by a drive threading through the trees to another quaint English cottage. Breaking through the trees, we find ourselves enshrouded in typical English weather, cloud cover and more rain, but that does not dampen our spirits for the brilliant moments that lie ahead. 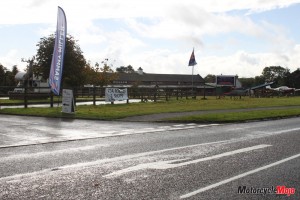 On the right, a distant sign on a red brick building unobtrusively signals our arrival at the Sammy Miller Motorcycle Museum. For those too young to know or not steeped in motorcycling history, Sammy Miller was 11 times British Champion, twice European Champion and winner of 1482 motorcycle trials and races. He is arguably the most famous and most trophied of any British motorcyclist ever. During his racing career, which spanned 55 years, he accumulated over 1500 trophies, many of which grace the walls of his museum.

The museum complex includes an English tea room, gift shop, restoration and refurbishment shop surrounding the museum, and a brick courtyard featuring a large fountain in the centre. Although under construction, a grand entry stands invitingly before us. Donkeys and alpacas pasture nearby, neighboured by numerous caged birds and a playground. Sammy has included much to accommodate a perfect family outing to the museum.

As I enter the museum, my eyes are drawn to a pristine 1929 Morgan Aero three-wheeled car with an exposed 1096 cc Blackburne liquid-cooled V-twin engine. I make my way to the centre of the museum, planning to radiate outward from there in all directions; I begin perusing the collection of over 350 motorcycles. 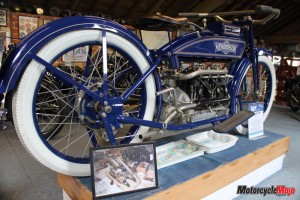 It is a fact that the UK has produced more motorcycle brands than any other nation, but I was not prepared for this. Names like Levis, Calthorpe, Quadrant, Coventry Eagle, Redrup, Dunelt, Royal Ruby, New Imperial, Stanger and Pacer are just a few of the unknown marques to me. And they all start and can be ridden. Quite amazing!

Standing front and centre is Sammy’s winning mount, the bike known as the GOV 132, a 500 cc Ariel single, looking like it just rolled off the assembly line. This still remains the world’s winningest motorcycle, having triumphed in 380 events, including six British Championships. Then come the racing bikes: Mike Hailwood’s 250 cc 4-cylinder and his 500 cc 4-cylinder, and Giacomo Agostini’s MV Agusta 16-valve 750. Nearby sits a Honda CR110 DOHC 50 cc twin that sported 8.5-hp with a top speed of 95 mph – and that was in 1963.

Sammy’s 1964 Bultaco Sherpa T stands stoically close by. This motorcycle spelled the demise of all British trials bikes, and on it Sammy won every major trial event and championship. Truly a legend, Sammy has devoted all his time and energy into building this museum, and it is one of the best motorsports museums in the world.

A Man with Much to Do

Finally, I meet the man himself, the legend Sammy Miller, full of years, and chock full of experiences; a man who has lived his life to the fullest. As I walk up to him, he is taking a measurement to locate bolt holes on a new fender for another motorcycle resurrection in his shop. Sammy is 81 years young and still works every day in his shop, a feat attributable, no doubt, to good genes and a lifelong enthusiasm for motorcycles. He gives me a few moments of time, but I can tell he wants to get back to his work.

Sammy proudly directs me to his Canadian family connection – a framed memoriam of his older brother Fred, hanging on a wall amidst the motorcycles. Rev. Fred Miller, who passed away in 2000 at age 77 after a long fight with cancer, was the senior minister of St. Andrews Presbyterian Church in Owen Sound, Ontario, for 28 years. Fred had moved to Canada in 1949.

As the museum fades into the mist of an English October afternoon, I reflect on the experience. This walk down memory lane was truly enlightening. Sammy Miller has made an indelible mark and contribution to the motorcycling community. His collection of refurbished gems will continue in perpetuity, giving everyone who enters these gates a fleeting glimpse of technology’s path forward. Thank you for that, Mr. Miller.