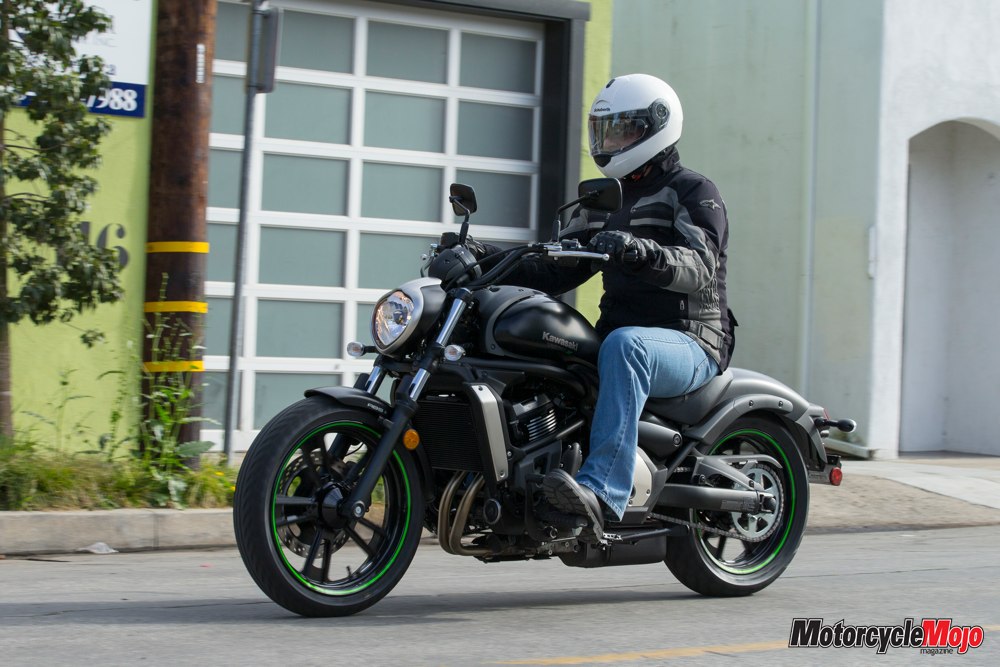 In motorcycling, the Vulcan name usually conjures images of big V-twins, skirted fenders and floorboards. But you won’t find any of these on the 2015 Kawasaki Vulcan S. For starters, it’s powered by a parallel-twin engine with sportbike lineage. And when looking at it, its partially exposed, steel-tube perimeter frame and offset, horizontally mounted shock bear a closer family resemblance to the Ninja 650R than, say, the Vulcan Classic. This resemblance isn’t accidental, because the Vulcan S was designed by Yoshifumi Mano, head of product development for the ER-6n, the Versys and, of course, the Ninja.

This stylish middleweight cruiser is Kawasaki’s latest addition to the Vulcan family, and it’s designed to appeal to a new, younger generation of rider than the aging baby boomer. It doesn’t resemble any of the other Vulcan models in Kawasaki’s line-up, brandishing a sleeker, sportier profile than the typical metric cruiser. The unique laidback silhouette is both stylish and sporty, and the overall effect is very attractive in the metal, though I find that the numerous plastic covers, which conceal some of the mechanical components, somewhat clutter the design.

One Size Doesn’t Fit All 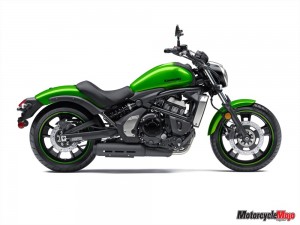 Simply producing a stylish new bike might not have been enough to attract a fresh breed of discriminating young riders, however, so the Vulcan S needed a hook. That hook is Ergo-Fit, a unique new feature that offers a much wider range of riding-position adjustability, to fit a broader range of body styles.

Buyers of brand-new Vulcan S motorcycles can take advantage of the Ergo-Fit system at no extra cost, and it involves much more than just a simple adjustment of the levers. When ordering the Vulcan S, the dealer will fit the bike to the rider, a process that includes choosing from two handlebars, three seats and three foot peg positions.

As delivered, the bike comes with a mid-placement seat and foot peg position, and the standard handlebar, all meant to fit riders measuring between five-foot-seven and six feet tall. If the reach to the handlebar is too long, there’s a reduced-reach handlebar, and for further adjustability, also available is a reduced- or an extended-reach seat.

Before making your deposit on your new S, you’ll be able to sample the seating position in the showroom; once the right fit is determined, the dealer will install the chosen items on your bike before delivery. Keep in mind that whatever comes off the bike stays with the dealer – there’s no going home with an extra handlebar or seat.

To facilitate the fitting process, Kawasaki plans to equip certain dealers across Canada with Ergo-Fit Centres, which are static showroom displays that include three Vulcan S motorcycles set up with different riding positions. If a dealership isn’t equipped with an Ergo-Fit Centre, however, you should still be able to be accommodated. It’s a unique approach that should entice new riders, since a big part of rider confidence is rooted in the riding position.

Only when buying a used Vulcan S 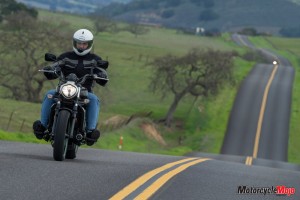 would you likely incur extra costs, should the previous owner’s setup not fit right. Handlebar cost is $93, seat cost is between $286 and $301, the shifter rod required to relocate the foot pegs costs $9, and any labour costs of course are extra.

There are 18 different seating possibilities in all, and regardless of which seat is chosen, seat height remains at a low 706 mm. Reach to the ground is also made easier by the bike’s very narrow midsection, and a muffler placed beneath the machine.

Since I don’t like stretching too far for the controls, at the bike’s press launch in Santa Barbara, California, I had my test bike fitted with the mid-placement seat and foot peg position, but opted for the reduced-reach handlebar.

Although the engine has been somewhat disguised with pseudo cooling fins, it’s easily recognizable, because it’s been around for a while. It’s the same liquid-cooled, 649 cc parallel-twin that powers the ER-6n, the Ninja 650R and the Versys 650. Kawasaki has made some internal changes to make the engine more cruiser-friendly, however, using different cam profiles, a heavier flywheel and a smaller throttle body – all of which shift the meaty part of the torque curve into the lower rev range.

Starting off on our 200 km loop, which included highway stretches and winding mountain roads, I immediately noticed a few novice-friendly features. First was the low centre of gravity, which makes the S a breeze to manoeuvre in town. Clutch effort is very light and it takes but a slight nudge at the shifter to find first gear. Like all Kawasakis, the S is equipped with a positive neutral finder, making it impossible to pop the bike into second gear from first at a stop.

The engine has bountiful torque at low revs, which is also conducive to confidence-inspiring low-speed handling. It does indeed feel stronger at lower revs than it does in the Ninja 650R, though power flattens once the tachometer needle sweeps past 8000 rpm. Probably my only qualm with the engine is that the throttle response was a bit choppy when transitioning from closed to open throttle.

The Vulcan S demonstrated its Ninja lineage as we wound our way through the southwestern part of Los Padres National Forest on San Marcos Pass Road. Steering was light and neutral, and it had considerably more cornering clearance than a typical low-slung cruiser. The foot peg feelers will touch ground, but only at a pace usually reserved for enthusiastic sport riding. The wide handlebar provides ample leverage, which makes steering around town effortless, yet it doesn’t induce undesirable weaving at highway speeds.

Being a cruiser, suspension damping is on the soft side, which hampers sporty riding but really improves comfort. The only available suspension adjustment is for rear-shock preload, and it was initially set too low for my weight, causing the bike to bottom often. Cranking it up to the fifth of seven settings nearly eliminated the bottoming, and also raised the rear end, which sharpened steering a bit.

After lunch, our route took us to the secluded Jalama Beach County Park, right on the Pacific, along a narrow and tightly twisted piece of pavement appropriately called Jalama Road. It was also very bumpy. I was surprised at how well the suspension handled the rough conditions, resisting bottoming on all but the biggest bumps, while providing a plush ride that didn’t wreck my tailbone. Our Kawasaki hosts were apologetic for having chosen such a bumpy road to the beach; I praised them for having allowed us the opportunity to test the bike in conditions that were more aligned with the roads we have back home.

After a day in the saddle, I did note a few things about the riding position. First, I must admit I do not like forward-mounted foot pegs – never have. They look great in David Mann illustrations, but they don’t work so well for long-term comfort. The Vulcan S is no different. The advantage, however, is that they allow for an open riding position on a bike with a low seat height while improving cornering clearance, and the range of adjustability offered through the Ergo-Fit system lets you fine-tune them for a better fit.

The other comfort-related discovery I made is that to achieve a shorter reach with the reduced-reach handlebar, engineers simply pivoted the grips rearward, which places your wrists at an awkward angle. It’s not uncomfortable, just awkward. After switching bikes with one that had the regular handlebar, I probably would have chosen the latter. This is something you’ll have to make sure you get right when being fitted at the dealer, because once you get your bike fitted, any post-delivery changes will cost extra. When being fitted, maybe you should bring some portable entertainment to your dealer and grab a seat on one of the Ergo-Fit Centre bikes for a couple of hours to see if there are any kinks in your chosen riding position.

The Vulcan S retails for a very reasonable $7,999, comes with standard ABS and is available in four colours (one colour option more than for our U.S. neighbours). Note, however, that it comes sans passenger accommodations; adding a pillion seat with the footrests and accompanying brackets will add about $420 to the price tag.

There are a number of accessories available that can transform the Vulcan S into a stylish lightweight cruiser, including a tall or short quick-release windscreen ($115 and $104, respectively), quick-release saddlebags (approx. $1,300 with the mounting hardware) and a 12-volt accessory outlet ($44). There are also a number of aesthetic add-ons available to personalize your ride.

With the new Vulcan S, Kawasaki has produced a very attractive, affordable and unconventionally styled (in a good sense) cruiser that should appeal to new riders, and with the Ergo-Fit system, it should facilitate the new-bike purchase by custom-tailoring the machine to the rider, instead of the other way around.