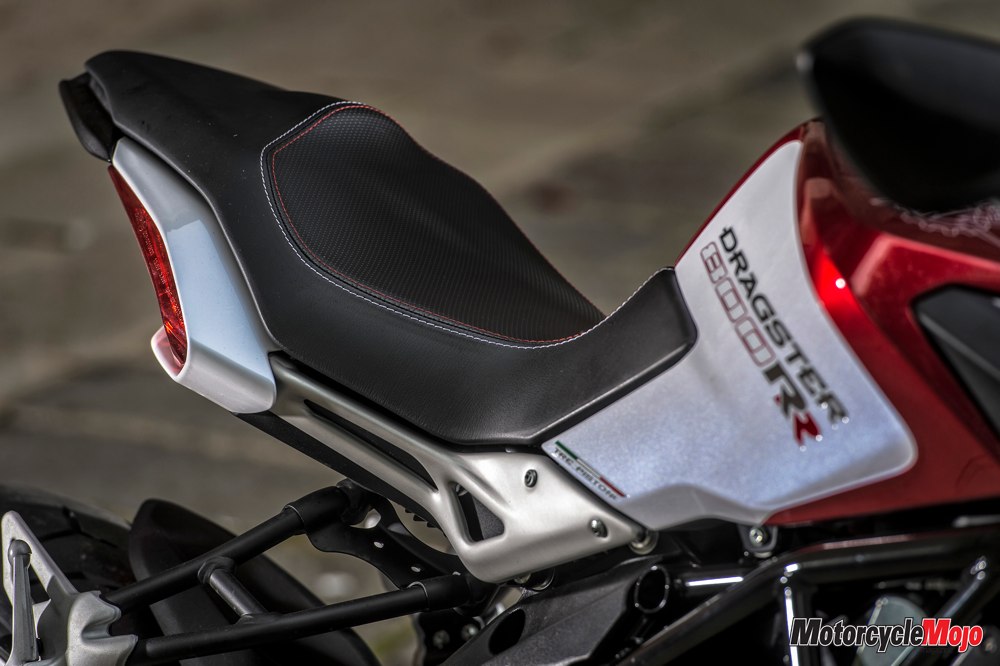 An increase in horsepower, along with a host of other upgrades, turns this hooligan into the exotic bad boy your parents warned you about

According to MV Agusta chief Giovanni Castiglioni, there was no marketing research done to determine a target market for the Dragster; no focus groups were tapped for input to boost sales. They just built the Dragster because they thought it was cool, and they expected to sell maybe 500 units. Within six months after its introduction last year, almost 2000 Dragsters were sold, and according to Castiglioni, if they had built more, they would have sold those too. To follow up on the Dragster’s success, for 2015, MV Agusta released a hotter, faster and meaner RR version, and I was invited to ride it in Siena, Italy. 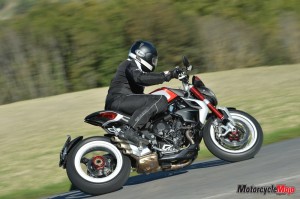 The Dragster is a customized offshoot of the Brutale 800 naked bike, which has become the Italian bike maker’s bestselling model. It shares many components with the Brutale 800; what distinguishes the Dragster is its unique adjustable handlebar, its blunt rear sub-frame that ends at the seat – there’s no tailpiece – and a fatter, 200-series rear tire mounted on a six-inch-wide wheel. Many of the components of the standard Dragster have transferred onto the RR, including chassis specs and bodywork, as well as various other bits. Where the RR version splits from the standard is in engine and suspension tuning, and there are some important styling variations. 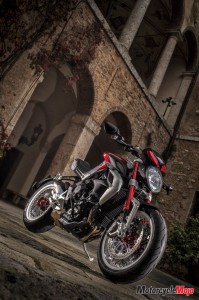 Like the standard Dragster, the RR uses a 798 cc inline triple, though it uses different tuning, which bumps engine output by 15 hp to 140, and the torque curve is flatter. Suspension components are mostly the same, except that there’s a new 43 mm Marzocchi inverted fork that uses aluminum male sliders with a DLC coating for longevity, and suspension settings are firmer. It also gets an adjustable steering damper (no damper on the standard bike).

The RR shares the Dragster’s eight-level traction control and four selectable ride modes. New is an electric shift assist that allows clutchless gear changes both up and down, and it has a slipper clutch.

The Dragster RR is among the most radically styled production bikes I’ve come across in a while. It uses tubeless spoke wheels with unique spoke mounting that really accentuates the rims, and they’re finished in contrasting colours. I think the Dragster’s wheels, whether painted black or white, look spectacular. 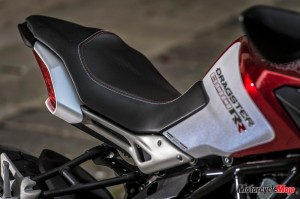 Our route took us on the sinuously tight and narrow roads intertwined among the hills and vineyards of Tuscany. We turned out of the hotel parking lot onto a ridiculously narrow, winding road, and within minutes were just hammering along at a pace set by MV Agusta’s guide riders that would have easily put us in the advanced group during a track day.

The RR has a compact riding position, its forward-biased seat nestling me snugly against the fuel tank. The bike feels tiny – until you twist the throttle, when it lunges forward with enough force to strain your shoulder sockets. There’s no doubt it has big-bike power, and it just keeps pulling hard all the way to redline. Because of the bike’s short wheelbase and light weight, the front wheel lifts going into fourth gear at full throttle, at speeds exceeding 160 km/h (not that I’d know).

Unfortunately, the fat rear tire exacts a slight toll on handling, and the Dragster RR needs a fair amount of steering effort to maintain a lean, with the effort increasing the deeper you lean. It also feels nervous and twitchy over bumps, causing me to crank up the steering damper a couple of clicks. Although I never felt headshake, the front end felt light and not too assured over bumps.

I don’t recall the standard Dragster I rode last year exhibiting such twitchiness, so I attribute it to the RR’s firmer suspension, though a number of the roads we travelled were very bumpy. Our MV Agusta hosts were apologetic about the rough roads, but I thanked them for providing riding conditions I can relate to back home.

Clawing at the Sky

Throttle action, though instantaneous when in Sport mode, is not abrupt and is easily modulated, even at low speeds. Twist the right grip over small crests in the road and the front wheel goes skyward; this hooligan machine is a bad influence and should be ridden accordingly hard, but bear in mind that Italian authorities are more lenient than our draconian law enforcement officials.

Sport mode also allows clutchless downshifting (as does Custom mode, but not Rain or Normal), blipping the throttle automatically when downshifting to smooth out the gear changes; on a couple of occasions, however, it provided an extra blip after the shift was completed, jerking the driveline. Regardless, I resorted to using the shift assist on downshifts for most of the day.

Throttle control gets softer in Normal mode, which makes puttering about town easier, and if you’re down to your last couple of points on your driver’s licence, you might want to keep it in Rain mode, which limits output to 100 hp and provides the softest throttle setting. I found Sport suited most situations and it was my default ride mode until our 200 km day ended.

MV Agusta, with the help of Giovanni Castiglioni and his bike-enthusiast engineering team, has come a long way in the last few years. It went from being a niche bike maker with just three models in the line-up in 2009 to a forecasted 19 models by the end of this year. Despite this growth, it remains a maker of exotic, upscale motorcycles.

“MV Agusta is a builder of premium motorcycles,” Castiglioni tells me during dinner. “We do not know how to build cheap motorcycles.”

And at $19,995, it’s not cheap. But for that price, what you get is an unapologetic custom bike that looks as if it came out of a California bike-builder’s shop, but with an exotic, Italian flair. It behaves like the roguish kid down the block your parents told you to stay away from: It’s brash, it’s nervous – and it’s a bad influence. So, you naturally want to befriend it.