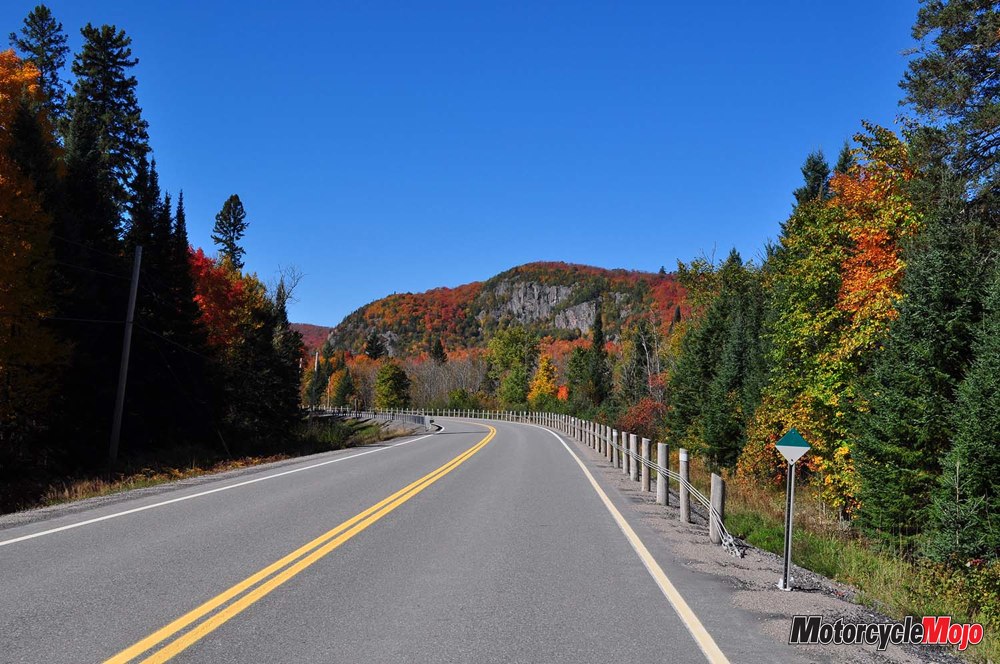 A motorcyclist’s playground for one, please

I’ve never been so glad to see hail or be pelted by it. Every stinging bite from the pea-sized pellets reminded me that the freezing rain and snow were behind me. However, the challenge of removing the ice buildup on my visor remained, and scratching at it with a pair of winter gloves worked about as well as scraping a windshield with a soggy Tim Hortons cup. “Screw it, I’m pulling over.” 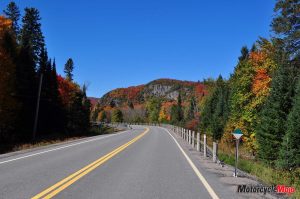 The weather in the weeks leading up to my trip on the Grand Algoma Loop had been sunny and warm, but as I prepared for my departure, so too did the weatherman’s optimistic forecast. By the time I passed Sudbury in the early evening, it was 8 C and falling, with almost 200 km to go.

Approaching Iron Bridge, foreboding clouds darkened the skies to a slate grey, roadside forest turned to exposed rock and each crest revealed an ever-expanding view of the country ahead until, at last, Lake Huron’s shores appeared before me for the first time. Islands of granite rose up out of calm waters, and at that moment the sun appeared, low on the horizon, casting long shadows with its waning rays.

The magical moment was fleeting, as most are, and the sun disappeared again, to be replaced with the cold, dark nimbus clouds that prepared to dump their contents all over my parade. Watching their inevitable approach across the huge landscape made me feel very small – and soon thereafter very wet. But as I would discover over the next few days, for every moment of discomfort I was dealt by Mother Nature, Algoma would present a new and amazing experience just down the road.

The last few kilometres into Iron Bridge followed the meanderings of the Mississagi River, once used by the native Ojibway as a primary means of transport from the expansive northern forests to the coast of Lake Huron. The river eventually deposited me at my destination for the night, the Red Top Motor Inn, just as darkness fell, the long ride on an unfamiliar bike having gone surprisingly well.

The experiences shared among new friends at the end of the day, over a meal, around a campfire or across a bar top, are a huge part of why I love to travel. My hosts at the Red Top that evening, Greg and Antonio, would be the first to bring a human element to my trip and, ironically, the last.

After checking in and unpacking, I returned to the dining room to find a gourmet menu created by Antonio. My dinner would be the last meal served that night, and it was made even better by the company of my hosts, their stories and a generous wine selection.

From Here to There and Back to Here 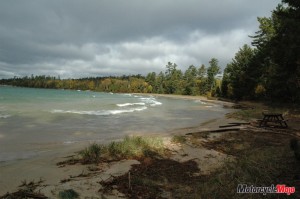 Rising in the morning to aromas wafting out of the restaurant instantly brightened the cool, damp conditions. A late start to my day’s ride saw the weather improve, and thanks to a tip from my hosts, a change in route took me north from Highway 17 onto 556 and 554, which then deposited me onto Hwy 129 northbound toward Chapleau. The sky was pure blue in the first hour on the bike, highlighting fall colours against hillsides and cliffs. Such was the breadth of my surroundings that I pulled over in honour of my favourite movie quote: “Life moves pretty fast. If you don’t stop and look around once in a while, you could miss it.” I thank you for your wisdom, Ferris Bueller.

The road soon met up with the Mississagi River National Park, following its namesake’s route through rocky valleys. Picturesque is an apt description, and it was easy to allow my eyes and mind to wander. During just such an episode, the pavement suddenly turned to gravel. The now intermittent loose surfaces (being refinish for the beginning of the 2015 riding season) had me swapping riding styles from flat track to full lean, on ever tightening corners that soon included abrupt elevation changes. Here’s where I lost myself completely in the exhilaration of the ride. 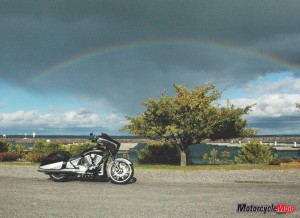 Dense forest lined the vast majority of my day’s route, with no villages or towns to speak of. The feeling of being truly alone was only interrupted by the odd logging truck – their cargo filling the air with the scent of fresh-cut pine, leaving behind a trail of sawdust that danced on the road like a light fall of snow – a thought I would come to regret. Days later, I found some of the airborne sawdust in my helmet. They say you’ll take a piece of this place home with you, but I’m not sure they meant it literally.

Approaching Chapleau, the temperature began to drop, and after a quick stop for gas, I donned another layer in preparation for darkening skies and the last leg to Wawa on Hwy 101.

There’s Something in My Eye

It began as a light rain, which then turned to freezing rain, before becoming a full-blown whiteout. Ironically, my water-repellent gear was the only thing the snow stuck to other than my face shield, which in itself posed a small problem.

The snow mercifully turned to pea-sized hail while I struggled to scrape my visor with a soggy winter glove with little avail. Pulling over seemed the prudent choice, and I did so with visions of a fellow motorist passing by to see this abominable snowman-like biker flailing about with a helmet-sized snowball in his hands trying not to be pelted unconscious by the frozen precipitation. Once again I needn’t have worried; no sooner had I stopped, the world around me went dead calm, leaving just a bike, a rider and a peaceful, seemingly endless wilderness. That night at the Wawa Motor Inn, I had the pleasure of enjoying a few pints with Gord Jones, owner of Jones Powersports, and one of his buddies. Gord and I share a very similar taste in bikes – and humour – apparently, as was made evident upon discovering we’d both owned similar Italian-made dual-sport bikes. Dawn the next day brought with it the sound of rain against my window and a repeated battering for the snooze button on my alarm. A much more respectable hour of day brought my actual awakening, followed by an obligatory picture of the Wawa Goose and my subsequent departure, then soon thereafter my first glimpse of Lake Superior’s rugged coast.

The Greatest of Lakes The massive wall of stone that flanks Old Woman Bay loomed ahead, distracting motorists that should be preparing to veer left at the bottom of the hill before plunging into the lake. Thankfully, Lake Superior Provincial Park is littered with roadside areas from which to admire the view or stay and camp. The remainder of my day was spent with Superior’s rocky eastern shores on my right and a seemingly infinite roller coaster of roadway ahead. Breaks were taken frequently to walk along deserted beaches and read placards containing information about the area and its history. Saying farewell to Superior in the early evening signalled my impending arrival in Sault Ste. Marie. Old friends, snow, sleet and hail greeted me there. A quick visit was all I had time for and I blasted through town, headed for Lake Huron and St. Joseph Island.

True to form, the sun came out once I crossed the bridge onto beautiful St. Joseph Island, and on my arrival at Hilton Beach, a rainbow appeared between the island and the mainland. Life on the Island The last night of my Algoma adventure featured a perfect steak dinner at the Tilt’n Hilton Restaurant and a lakeside view from my room at the Hilton Beach Inn. Awakening to the sun rising over the marina’s placid waters had me out of bed without delivering even a single blow to the unsuspecting alarm clock. Wandering between slumbering vessels, perched on their blocks and stands, awaiting winter’s grip, the realization that this would be my last trip of the season began to sink in. Riding east on Hwy 17 allowed for an unobstructed view of Lake Huron’s North Channel, en route to the starting point of my loop in Iron Bridge.

I couldn’t resist one more stop at the Red Top, as Greg and Antonio had told me today would be the end of their season. I arrived just in time to enjoy the last breakfast they served before closing for the winter and bid them farewell. Pulling out of Iron Bridge, headed back east, marked the end of my Grand Algoma Loop. It was a trip of remarkable contrasts between land and sea, dull greys and vibrant colours, snow and sunshine, the chilling ride and the warmth of complete strangers. Not seeing a single motorcyclist on those incredible roads over four days was perhaps the most striking contrast of all. I’ll never forget the time I was lucky enough to have Algoma all to myself. For more information and riding routes in the Algoma region, go to www.ridealgoma.ca.