Following part of the route that Karen Nickel’s grandfather, along with 26,000 other Canadian troops, took more than 70 years ago put the finishing wrap on an amazing Italian motorcycle tour

Rome to Sicily evokes visions of twisty coastal and mountain roads, medieval villages, ancient ruins, as well as Calabrian and Sicilian cuisine and wine. Italy has attracted waves of invaders over the centuries, including the Canadian army. Our local regiment from the Belleville, Ont., area, the Hastings and Prince Edward Regiment (Karen’s grandfather was an officer in the Hasty P’s), along with 26,000 other Canadians, waded ashore in southern Sicily under cover of darkness in the early morning of July 10, 1943, and struggled across its rugged mountainous terrain, opposed by crack German and Italian army units on their way to Rome. Karen and I had always wanted to see the land where they fought and thousands died. To contend with the reputation of Italian drivers, we invested in high-visibility riding gear before we departed. This time, they would see the Canadian invasion coming. 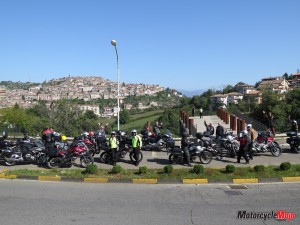 Karen and I arrived in Rome a couple of days earlier to acclimatize and sightsee. With recent memories of the Colosseum, Forum, Palatine, Pantheon and dining in Piazza Navona in our mind, we met up with 18 other riding enthusiasts from all over the world, eager to begin our motorcycle adventure. Our three guides for the next 10 days described our daily ride options (two routes with varying degrees of difficulty or just head out and get lost on your own), tour rules (no alcohol until we arrived at our evening destination) and local rules of the road (turned out to be a bit of a joke). We were introduced to our steeds: late-model BMWs, Ducatis, as well as a couple of Honda and Suzuki bikes glistening in the sunlight. The bike I had reserved was a BMW 800 GS.

The bike I met, however, was not the factory-lowered model I had tested in Canada and subsequently reserved, but rather the stock bike. It seemed high for someone with a 30-inch inseam, but with Karen perched on the pillion, I was just able to touch terra firma with my toes.
Into Rome’s Traffic Vortex.

After a jet lag-erasing sleep, assisted with a great deal of local vino, we dropped our overnight bags into the chase van and saddled up. The parking lot was too small for a practice run, so we were immediately thrown into the seething, swirling maelstrom of Rome rush hour traffic. Our hotel was 10 minutes from the Vatican, so we had to make our way through the congested, twisted, narrow and almost incomprehensible downtown road pattern to the Autostrade. Surrounded by swarms of buzzing scooters, forced into the wrong lanes by buses belching black diesel exhaust into my face, cut off by taxis missing me by mere inches, I quickly learned that road lines are only a distraction and that all potential road space, no matter how small, must be taken. Ride fast, aggressively and quickly learn the art of lane splitting or end up in everyone’s dust. With sweat trickling down the inside of my jacket, we reached the Autostrade where the posted 130 km/h seemed to be the minimum required speed to survive. The lightly loaded 800 with two up met the challenge, but even flying on the back of the Beemer at 130 to140 km/h, we were still passed as if we were standing still by other vehicles, including the occasional Ducati.

Off the Autostrade, we quickly rose through the Lepini Mountains, learning how to navigate the tight bends and hairpin turns we would have to contend with thousands of times over the next 10 days. No gentle sweepers here. We descended into Naples on the way to Pompeii with just enough time to have a private evening tour after the busloads of tourists were long gone. It felt surreal walking by the lights of our cell phones through the abandoned streets and buildings of this ancient city, obliterated by tons of volcanic ash, which spouted from Mount Vesuvius in AD 79.

Every riding skill we had developed (and new ones we had just learned) were tested on the Amalfi Coast, navigating the narrow, twisted road cut into the rocky promontory from Sorrento to Salerno. With the Mediterranean to our right, we threw ourselves around hundreds of blind hairpin turns, passed slow-moving trucks and buses with no room to spare, and threaded our way on upgraded cart paths through picturesque villages clinging to the mountainside to arrive at the south end, wanting to turn around and do it all over again. 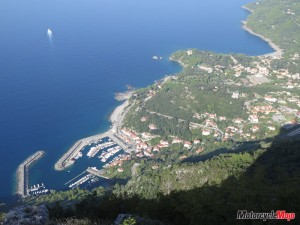 After a hard day of riding, a swim in the cool, clear water of the Tyrrhenian Sea, a fantastic pasta-based four-course meal, spectacular local wine and a good sleep, we were ready for more days of riding bliss. The roller coaster of a ride to the Statue of Christ the Redeemer (Statua el Cristo Redentore) on the high mountain cliff overlooking Maratea was nerve-racking for someone leery of heights (such as myself). The view was breathtaking, and after a prayer to the main man himself, we made it back to the coast.

Following an espresso stop in Tropea on one of our coastal ride days, Karen and I headed off on our own (got lost). We had a most enjoyable experience exploring a road to nowhere in the mountains and quaint seaside towns, and stopping for cappuccino and gelato with the local families enjoying a beautiful, sunny Sunday afternoon. Each evening before dinner, we would meet around the pool patio and recount unbelievable stories – embellished with copious amounts of beer. 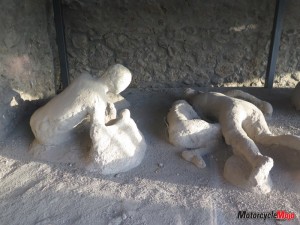 A ferry ride across the straights to Messina landed us in Sicily. After climbing some adrenaline-pumping curves for our first Sicilian coffee shop, a resident pointed out an old church made famous in the Godfather. We stayed near Taormina under the shadow of Mount Etna, an active volcano dominating eastern Sicily, in a hotel whose driveway had the incline of a black diamond ski slope (moguls included). The mountain town was picturesque, with its well-preserved Roman amphitheatre, but a bit of a tourist trap, inundated with herds of photo-snapping travellers pouring out from tour buses.

The fine, black volcanic dust drifting down from Mount Etna settled on the mountain roads, mimicking freshly laid asphalt. It laid down two R1200RTs, leaving one with a ride-ending injury (leaking oil from a cracked cylinder head), and the rider and passenger with contusions, lacerations (trip to the local hospital for stitches), sprained wrist and broken front teeth (beware failure of the flip-up helmet). The other Beemer and rider were up and back on the road, shaken but not deterred.

The roads in Italy were were difficult, but the roads in central Sicily in particular were tougher. Uneven surfaces, potholes, cobblestones, impossible turns, volcanic ash and loose gravel added to the challenge, especially with a bike that was a bit too high for me. One of the taller riders was cramping up on his Suzuki V-Strom, so we decided to do a test switch. I was a little concerned that the smaller bike would not be up to the challenge of two up on the steep mountain roads, but that little V-twin met all my expectations, having no trouble keeping up with all his bigger brothers. And best of all, both feet could touch the ground at the same time. I ended up riding the V-Strom for the rest of the Sicilian ride. Riding into the medieval-looking Sicilian mountain villages, clattering over variations of the obligatory cobblestones, burnished to a slick black sheen by previous travellers over the eons, we discovered a dangerous slippery surface for both tires and feet. Cars, trucks, scooters, people and animals darted in front or alongside us, our side cases almost scraping either the stone walls or the haphazardly parked cars as we navigated the tight corners of these narrow, dark streets.

We would ride into the centre of town like a marauding army, our exhausts reverberating off the walls of the ubiquitous town square. Once we quieted our engines, stabled our rides and doffed our helmets, the villagers could see we meant no harm and came out to greet us and direct us to the best espresso in town. Between villages, we rode the most magnificent roads, crossing one mountain range after another. The rhythm became part of us as we leaned right and left into the thousands of curves, with scarcely any straight road for hours of riding. We learned the perfect line for these complicated, haphazardly engineered roads, but it was constantly broken by potholes, gravel, livestock and the occasional wild boar. We dropped down for a ride along the northern coast to Cefalu. Heading back into the mountains, we roared through Corleone, the famous home of the Mafia, pointedly ignoring the smartly dressed young men in black suits and sunglasses lounging on black sedans parked in front of a local hangout. Agrigento, on the south coast, is an ancient Greek city of 800,000 – many centuries before the Roman era – and was astonishing. Karen found the famous mosaics of Villa Romano outstanding. A special and unexpected highlight was being directed out of a village that held no lunch possibilities to an old hunting lodge down a treacherous dirt road several kilometres out of town to enjoy massive plates of grilled meat.

Picnics arranged by our guides, such as the one in an old forest preserved as a State Park, will be remembered fondly by all the riders. The image of a gas station attendant peering into the gas tank as he filled one of the bikes, a lit cigarette loosely dangling from his lips, will be indelibly imprinted in my mind. In Search of the Battlegrounds Nearing the end of our trip, Karen and I decided to head off on our own again to ride the difficult route taken by the Canadians as they fought their way north through the mountains in the dusty, hot summer of 1943. Harold and Rita, two other Canadians on the ride, and several of our new American friends decided to tag along.

We rode the forgotten battlegrounds of Piazza Armerina, Assoro, Agira, Catenanuova and Regalbuto. The Canadian Agira War Cemetery was a moving experience. Four hundred and ninety white tombstones engraved with the name, age, unit and memorial inscription are situated on a beautiful forested hillside under the looming mountain village of Agira, where so many of these young men had died. Following an uphill path on extreme curves flanking the western slopes of Mount Etna, we arrived in Catania, our bikes silenced for the last time. We ate, drank and toasted away our last night in Sicily with our new friends. We had met all the challenges and came away exhausted, exhilarated and much better motorcyclists. Side Bar #1 The Forgotten Canadians in Italy On July 10, 1943, 26,000 Canadians of the Hastings and Prince Edward Regiment, the Royal Canadian Regiment and the 48th Highlanders of Canada, invaded southern Sicily. They fought and pushed their way through the Sicilian central mountain range.

Canada has more than 5900 war dead buried on Italian soil, including in the stunningly beautiful Canadian Agira War Cemetery in the heart of Sicily, the sole European war cemetery in which only Canadians are buried. One of the best descriptions of that time is from a young Hasty P’s infantryman, Farley Mowat, who wrote, “and no birds sang,” a line from his same-titled memoir. A humorous anecdote was when Mowat and his friend were caught behind enemy lines on an army-issue Norton motorcycle. And No Birds Sang is worth reading. The Normandy invasion the following year, while not necessarily larger, eclipsed the Sicilian invasion, which for many is forgotten or unknown. We must never forget these brave Canadians left behind in Italy.