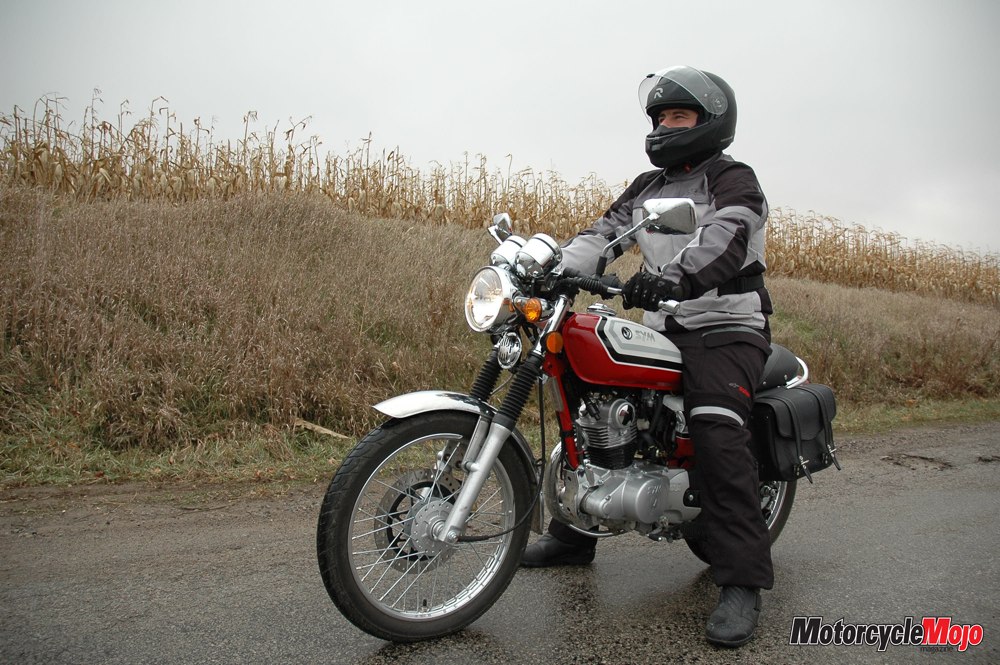 There’s no overstating the importance of being understated

Small bikes are a blast. They make me feel like a kid again, and that’s quite a feat these days. Perhaps it’s riding around at the peak of a machine’s ability without the fear of tickets or bodily harm, or in this case maybe it was riding a motorcycle that began production before I was born.
My rejuvenation, so to speak, arrived in the form of a 2014 SYM 150 Wolf Classic, kindly delivered to our offices by SYM’s Canadian distributor and Motorsports Canada Ltd. owner, Michael Wells. His words, and I quote, were “Keep it as long as you’d like.” So I did, and then I kept it a little longer.

What’s in a Name? 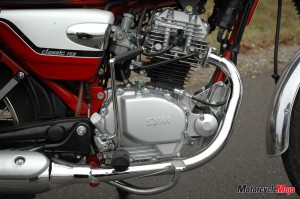 For those not familiar with the SYM Motorcycle brand name, it’s a division of Sanyang Industry Co. Ltd. of Taiwan. SYM began assembling motorcycles under licence from Honda in 1961 and, more significantly in our case, began assembling Honda’s CB125S overhead-cam single in 1969. When Honda terminated its contract with Sanyang in 2002, the assembly lines just kept on rolling. The bike we tested is essentially an updated 150 cc version of the original CB125S, sold under the SYM banner.

A Technological Tour de Force It Is Not 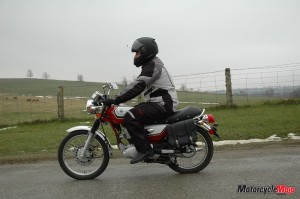 In regard to specs and components, let’s be frank, it’s not about high performance or cutting-edge technology. The Wolf Classic has less than 15 hp and weighs 120 kg, with a seat height of 760 mm; this motorcycle is as beginner-friendly and unintimidating as a bike could be. The power is adequate to keep you in the flow of traffic on all but super-slab surfaces, and fuel economy is a miserly 2.7 L/100 km – even with the throttle pinned from time to time. It’s still carbureted and fuelling is spot on, as were the clutch, shifter and gearbox. We could liken the design to a smooth stone you might find on the shoreline: 40 years of rolling down SYM’s assembly lines have rounded off any objectionable protrusions on this bike’s character, performance and appearance. Well, almost. Other than the occasional false neutral at high rpm, the bike we tested actually came with a pair of protrusions: small saddle bags that I was determined to remove. But there’s no argument with their functionality. As the SYM turned into a long-term fixture, so too did the effective little saddlebags.

Pin It to Win It

The riding experience on the Wolf Classic is where you can make a strong argument for purchasing this small, modestly propelled and priced motorbike. For the sum of $2,999 plus freight, prep and taxes, you get a reliable and handsome motorcycle that makes a good commuter in the city or on surface streets. The Wolf Classic skips along at 80 km/h with little issue, and on a slight downhill, she can be coaxed over 100 km/h. Even at that speed the front disc brake with steel-braided line has no problem slowing down the fun. Ringing this bike’s neck is part of the enjoyment, as it is with most small bikes, and there’s little guilt associated thanks to the engine’s tough, Nikasil-coated bore and proven components being more than capable of taking the flogging. Mind you, a more sedate approach to riding suits the SYM best.

There was great satisfaction to be found just putting along and taking in the passing scenery that I’d been blowing by in my car or on more powerful bikes. How had I not noticed that half-covered 1968 Camaro rotting away next to the old barn? Okay, so maybe there are some things best left unseen, but the point is, you’ll have time to look around. And while you’re moseying, you may also notice people pointing and staring at you on this café-esque throwback that never actually got thrown back or thrown away for that matter, just improved on since SYM started building these simple bikes all those years ago. So I guess you’d call it an authentic café. It does have two-position adjustable clip-ons, a kick-starter, fork gaiters and chrome analog gauges after all. Anyway, I decided that the oglers – and there were many – either saw something familiar or attractive about the SYM, with its classic, understated styling and eye-catching red on white livery, or I had something lodged in my teeth, which they could clearly identify owing to the stupid grin I was wearing most of the time.

I spent more time with the SYM Wolf Classic than with any other bike over the 2014 riding season and had no desire to return it even after the snow arrived. It became a trusted companion, never failing to start or deliver me from point to point, regardless of the conditions. But more importantly, it made me feel like a kid every time I rode it. And that experience alone would be worth the price of admission, which is the same in Canada as it is south of the border for 2015, regardless of the exchange rate.