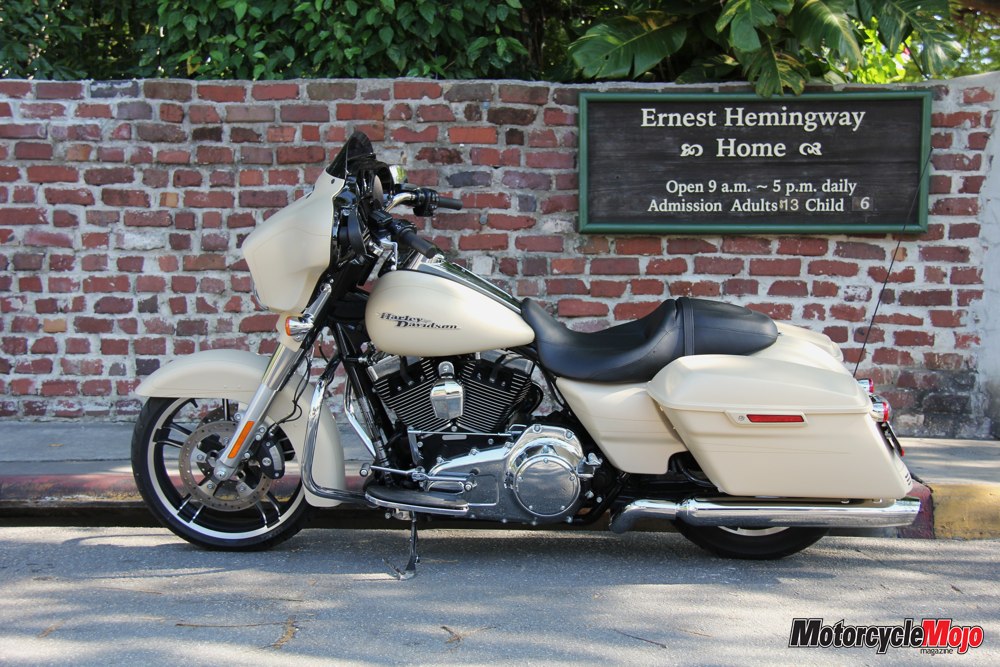 There predictably comes a time every year when my feelings toward the cold greyness of the winter season transition from mere apathy and disdain to pure, unadulterated loathing. The timing may vary from year to year, but the record-breaking plethora of snow and sub-zero temperatures this particular winter had me climbing the walls and looking to escape Mother Nature’s icy wrath before I went postal.

This hatred is of course compounded exponentially for those of us who rely on two wheels not only for mere transportation, but also as the utter lifeblood of our being. With only five free nights to spare and an uncontrollable urge to ride, I researched destinations that would maximize both my sun exposure and seat time.

Hibernating over the previous months had allowed me to catch up on some classic books. I found myself drawn to the works of literary giant Ernest Hemingway, and was eager to find out more about his adventurous and ultimately tragic life beyond the pages of his stories. I learned that he spent the better part of a decade in Key West and wrote some of his most celebrated works there, including For Whom the Bell Tolls, which I happened to be reading. It seemed like an intriguing destination worthy of exploration.

Time to Get Away 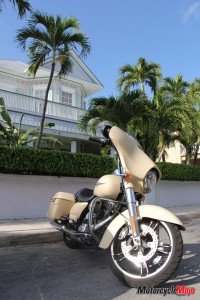 As is the case with any travelling or, commuting, or life in general for that matter, visiting the Florida Keys is best experienced from the seat of a motorcycle. Immediately after landing, I made a beeline to pick up a gleaming 2014 Harley-Davidson Street Glide Special for the excursion. Strapping on my helmet and sliding on my Wayfarers, I settled into the saddle and felt the familiar Twin Cam 103 roar to life beneath me. Project Rushmore accomplished a great deal in making the touring line better travel companions, including improved aerodynamics, ergonomics and an integrated GPS that made riding in a strange city much easier, not to mention safer.

Once I found my way to US Highway 1 and pointed the nose of the Hog south, my pulse slowed and my shoulders relaxed. Stress is a four-letter word in the Keys, and it doesn’t take long to become acclimatized to the slower pace of life there. Grinning from ear to ear, I set my course to Key Largo and enjoyed the scenic ride to the sound of Waylon Jennings’ booming voice echoing through the speakers of the infotainment system from my iPod. As the sun dipped lower in the sky, the scent of saltwater air floated on the warm breeze as I passed through Everglades National Park. Heeding the many warning signs along the side of the road, I kept a keen eye out for crocodiles.

My only mission for the first day was to snap a few pictures and make it to the Bayside Inn before dark. As I unpacked the one-touch saddlebags, two men with deep southern drawls approached to admire the Street Glide. “Y’all better lock that bike up good and tight tonight; otherwise, she may not be there in the mornin’,” said the first, whose sentiments were echoed by the second, who added, “Cuz she’s bea-ut-i-ful,” as they both nodded in approval. Outfitted in distinctively striking Sand Cammo Denim paint, this was certainly not the only time it would be complimented that week. The goal of Project Rushmore was to attract a new audience with more modern styling and features while also addressing small idiosyncrasies Harley’s faithful owners had been lamenting for years, without alienating them. It seems to be working. 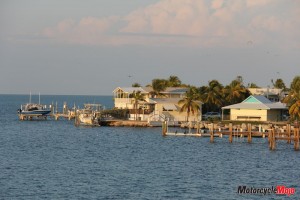 The Bayside Inn is a popular spot for motorcyclists because of its location near the top of the Keys, but also the proximity of the rooms to the parking lot and Snook’s Bayside Restaurant right next door, where guests receive a 10 percent discount. Each evening, locals and tourists alike are invited by the sound of a conch shell horn to congregate on the patio of the beachside tiki bar to enjoy the sunset, a Florida Keys ritual. Sidling up to the bar to have dinner and enjoy some live music and a few cold beers as the sun went down, I made friends with Derek, the bartender – a gentlemen who encapsulates merchants of mixology in the old-school tradition. He introduced patrons to each other by name and hometown while telling entertaining stories, effortlessly mixing cocktails and bussing tables at the same time. He even remembered my name and drink choice, cracking me an ice-cold Yuengling before I could even sit down when I returned later in the week. If you happen to find yourself in that part of the world, tell him Dustin from Toronto sent you.

I awoke the next morning greeted by blue sky and the sound of the ocean lapping at the sandy beach. It was a magical feeling to realize that the only thing I had on my itinerary for that particular day was to explore the Florida Keys in the sunshine. Logging into Facebook while I waited for my morning coffee to percolate, I saw my feed was littered with friends and family lamenting the frosty temperatures and the accumulating snow back home. It was then that I decided to go off the grid, shut off my phone and truly enjoy my time away. 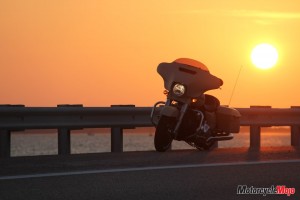 As I continued my journey down US Highway 1, I couldn’t get Joni Mitchell’s song “Big Yellow Taxi” out of my head. “They paved paradise and put up a parking lot” has never rung more true than in the Florida Keys. The natural beauty and culture of the Caribbean has been replaced with the epitome of Americana. Connoisseurs of fast-food restaurants or tacky souvenir shops will rejoice, but I’ll admit I was hoping it would feel more remote and less suburban. The landscape did change for the better, however, as I approached the Glunz Ocean Beach Hotel & Resort in Colony Key, where I’d be staying for the next two nights. Assistant GM Eric Oestreich rolled out the red carpet for me, and turned out to be a fellow Canadian. As the story goes, he was on vacation in the Keys one winter and couldn’t bring himself to go back, so he decided to raise his family where the sun shines and the air doesn’t hurt your face for half the year. The more time I spent there, the more I understood and grew anxious about returning home, myself.

US Highway 1 connects the Keys through a series of bridges of varying size, including the massive Seven Mile Bridge, which joins Knights Key in the middle Keys to Little Duck Key in the lower Keys. It is a strange sensation to to cross a seemingly endless bridge surrounded by turquoise water. Remnants of the old railway bridge can be seen in many places along the route, providing a glimpse into the history of the region.

Completion of the Overseas Railway from mainland Florida was commemorated with the first train arriving in Key West on January 22, 1912, changing the Keys from an isolated outpost reachable only by boat to an accessible destination for tourists and cargo. The railway was the brainchild of Standard Oil tycoon Henry Flagler, who barely lived long enough to see his vision and investment come to fruition. Reaching Key West and the zero mile marker for Highway 1, I toured around and took in the various sights and shot an obligatory photo of the concrete buoy marking the southernmost point in the continental U.S.A. The Keys are a mecca for watersports, where tourists have the option to snorkel, scuba dive, Jet Ski, or take in a glass-bottom boat tour or a sunset sail. Each evening, people flock to Mallory Square like moths to a flame to take in what has been hailed as the best place on earth to witness a sunset.

From Wreckers to Authors

Visiting the Shipwreck Museum was fascinating, as it recounts the colourful history of the island, which was settled by wreckers, who would plunder merchandise and goods from ships caught on reefs or that had succumbed to violent storms, making it the richest city in the United States at one time. Given that Ernest Hemingway was a deep-sea fisherman, bull-fighting enthusiast and big-game hunter, I imagine it was this adventurous and rebellious spirit that attracted him to inhabit the island with his children and second wife (of four), Pauline.

The famous novelist purchased a spectacular home constructed on the highest point of the island by wrecking magnate Asa Tift. The private residence has been maintained in the same condition, and it serves as a museum in his honour. It features the only pool in Key West – Pauline had it installed while he was away on assignment for US$20,000. An unfathomable amount for 1938. To put it into perspective, the entire estate was purchased years earlier for only US$8,000. Upon his return home, Hemingway was understandably less than impressed, and allegedly took a penny from his pocket, stating, “Here, take the last penny I’ve got!” Apparently, Pauline thought it would be funny to commemorate the occasion by placing the penny in the wet cement, where it can still be found today. Along with many other artifacts, antiques and books owned by the Hemingway family, the property is inhabited by as many as 45 cats said to be the direct descendants of Hemingway’s cat Snowball, many of which are polydactyl – meaning they have more than the usual five toes on a paw.

Hemingway wrote some of his most critically acclaimed work, including A Farewell to Arms and For Whom the Bell Tolls, in the study of that home. He may have only spent nine years in Key West, but his larger-than-life persona evidently had an indelible effect, as reminders of him can still be found all over the island. No doubt such a place left an impression on him as well; it is impossible not to take a piece of such a unique place with you when you leave.