From Hollywood A-listers to rock icons, the X132 Hellcat Speedster is popular with the rich and famous, and let’s not forget about the collectors.

South African-born Pierre Terblanche is one of the most acclaimed motorcycle designers in the world today. After making his mark penning notable designs for Ducati, including the Multistrada, Supermono, 999, Hypermotard and MH900e, Terblanche also anticipated by a good decade the current penchant for retro-inspired models with his trio of Ducati SportClassics launched in 2003.

After spending time with Moto Guzzi and Norton, in 2013 Terblanche moved to the United States to work for Confederate Motors, for which his debut design, the X132 Hellcat Speedster, was launched last August to some acclaim. But three months later, just as the first such bikes rolled out of the company’s Birmingham, Alabama, factory, Royal Enfield announced that Terblanche was moving to India to head up product development for the company, making the Speedster his farewell legacy for Confederate, which has become the boutique bike-building brand of choice for the U.S.A.’s rich and famous. Numerous celebrities, from Hollywood A-listers such as Tom Cruise, Brad Pitt and Nicholas Cage through to rock idol Bruce Springsteen, head the high-profile roster of Confederate owners, often with more than one of these exquisitely crafted, ultra-costly two-wheeled works of art in their garages. Starting price for admission to the Confederate owners group used to be US$72,000, while prices for the company’s radical P131 Fighter model started at US$100,000. But now Confederate president/CEO Matt Chambers has taken the firm’s self-styled Art of Rebellion to its pricelist as well as its product line with the new X132 Hellcat Speedster selling at US$69,500, representing a slightly more affordable product in the company’s catalogue. Well, everything’s relative . . .

Named after the legendary Grumman F6F Hellcat carrier-based warplane, the X132 has been the mainstay of the Confederate Motor Company’s range ever since deliveries of its debut version, powered by an S&S Harley clone motor began back in 1994. Two decades on, Chambers has cut a deal with the Wisconsin-based engine manufacturer to essentially produce Confederate’s own air/oil-cooled V-twin engine derived from its 56.25-degree X-Wedge engine, starting with the Hellcat’s 132 ci version – hence the X132 name tag.

The Jambalaya of Motorcycles 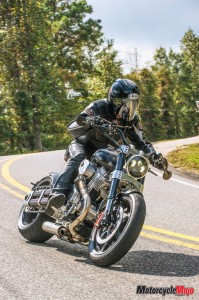 My chance to become the first person outside the company to ride the new Speedster came by visiting Confederate’s new 2322 square-metre factory in Birmingham that it moved into in October 2013. A renovated 1940s brick warehouse, the factory has the capacity to lift production from the present 100 bikes per year to 150 annually by 2016, and then, as momentum builds strongly after that with a range of new models under development, to an eventual maximum of 1000 bikes per year – not Honda numbers, exactly, but still a cool multi-million dollar business. The company founded 20 years ago by Chambers, a Louisiana lawyer, has ridden out the recession through a mix of foresight and tenacity, where most other boutique cruiser manufacturers have gone bust. “We’ve seen out the downturn,” says Chambers, “and now our link with S&S allows us to go for growth by significantly reducing our prices, without compromising on the quality and uniqueness of our products. We’re adopting their X-Wedge engine across our model line-up and have several other mind-blowing designs in the works built around it. In the meantime, the X132 Hellcat Speedster is a stripped-down American hot rod representing a dragster for the street that is powerful, beautiful and, most of all, a thrill to ride. It’s the Jambalaya of motorcycles!” Speaking as a former resident of New Orleans (until Hurricane Katrina destroyed the Confederate factory there in 2005, necessitating the move to Birmingham), he should know.

But the Speedster is a Louisiana gourmet dish prepared in Alabama by a South African chef, and as such is different from what’s gone before, just as every pot of jambalaya is a stand-alone Creole concoction. So I was quite unprepared for what awaited me as I threw a leg over the Speedster and settled aboard the surprisingly comfortable yet minimalist-looking leather-clad seat. Having ridden the previous X132 Hellcat on its 2012 debut, I was all set for a revised version of its sporty stance that was more Ace Café than Sunset Boulevard in the way it moulded you to the bike. Except now on the Speedster there’s a radically different Terblanche-created feet-forward riding position, with the footpegs now 460 mm farther forward than the previous rearsets straight out of any café racer catalogue. 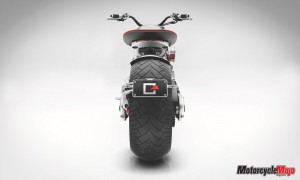 So now you seem perched very high up on the Speedster with your legs straightened out in front of you, and strangely disconnected from it, even if you’re sitting low enough to easily put both feet flat on the ground at a stop light. The whole bike seems very low slung compared to before, so you no longer feel a part of it as on the previous X132 café cruiser. Okay, maybe it’s more relaxing when cruising in a straight line, but it’s now hard to ride the Speedster in something approaching anger. That’s because you can’t easily grip the fuel tank with your knees to help steer the bike in turns, since your feet are parked way out in front of you – fine for a chilled-out cruiser, not so good for the kind of road action that Confederate riders relish. I’m sure Terblanche did his homework before changing the ethos of the bike so radically from the original X132 Hellcat it’s derived from, but I reckon that since the frame remains unchanged, Chambers should offer customers a choice between the two different riding positions to avoid disappointing a significant percentage of Confederate’s traditional customer base.

There’s also a new handlebar that is wider and farther pulled back than before, resulting in a more upright riding position that’s indeed a fair bit more comfortable than the old Hellcat, whose low-set, flat clip-on handlebars dictated quite a long stretch forward over the fuel tank, delivering a sporty stance that got to be hard work on your wrists and shoulders after a couple of hours. Its extra leverage is also handy because of the triumph of appearance over function Terblanche has inflicted on the Speedster by adopting a massive 240/40 ZR18 rear Metzeler tire, mounted on an eight-inch BST carbon rim, compared with the superbike-sized 190/55-17 Pirelli Diablo and six-inch rim on the old Hellcat. You don’t get to use a fraction of the width of this design statement, which instead heavies up the steering and makes the previous sweet-handling Confederate café cruiser into frankly a bit of a truck – not helped by the inch-longer wheelbase and substantial extra trail. Form over function – pity. 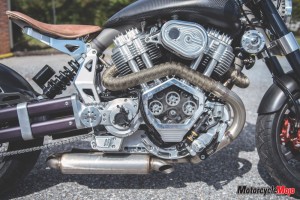 Firing up the X-Wedge powerplant sees it burst into life with a meaty peal of thunder from the exhaust canister beneath the engine, settling to a 900 rpm idle that’s devoid of the clackety rattles and shakes of most other American air-cooled V-twins; it’s quiet in terms of decibels, too. Really, the whole bike exudes quality, representing a decisive step up in terms of finish over any previous Confederate model – the Speedster no longer feels like a collection of parts, but a more homogeneous, refined whole.

Although there are no vibration-sapping counterbalancers, and the engine is rigidly mounted in the frame, the X-Wedge motor is improbably smooth by air-cooled American V-twin standards, with zero undue vibration at any revs. It’ll pull cleanly off idle thanks to the huge amount of torque on tap at almost any engine speed. Torque peaks at just 2000 rpm but holds hard and strong all the way through to the 5800 rpm rev limiter, which you have no business ever remotely approaching. The X-Wedge motor’s happy zone is between 1500 and 3500 rpm, and you’re best shifting up at 4000 rpm, as shown on the bike’s only instrument, a large black-faced analog tach that’s very café racer, containing a small digital panel showing road speed and the fuel level, with a red ignition light, green N for neutral and – that’s all. Doing so will let you surf that so-strong torque curve, but while 3000 rpm in top/fifth gear is already 160 km/h, it takes you very little time to get there thanks to those substantial reserves of grunt. It’s very refined in operation, practically civilized, complete with a quieter induction system and less strident exhaust.

Though the surprisingly light-action, hydraulically operated Bandit clutch (surprising because of the 140 ft-lb on tap at just 2000 rpm) barely needs to be troubled accelerating out of even the tightest turn from little more than walking pace, you’re best off keeping the revs above 1800 rpm to avoid any transmission snatch. But there’s acres of torque from there on up to the 5100 rpm power peak, where the triple-camshaft 2136 cc engine delivers 121 hp at the gearbox – 15 hp less than before, but delivered more smoothly as part of the gentrification process that Terblanche has applied to the rest of the bike.

The shift action of the five-speed Confederate gearbox is quite positive, swapping ratios smoothly even if, with so much torque on tap, two of those five ratios are completely superfluous. You can start off from a stop in third gear without slipping the clutch unduly, and the X132 will go almost anywhere in top gear, with simply magnificent roll-on performance from any revs. This is a great bike for close-quarters traffic combat, using the S&S engine’s meaty response to zip past cars or trucks as you carve your way through them.

Although you expect all that from such a big-cube motor, the fact that this impressive performance is delivered with such extra-refinement and so little vibration is really notable. Still, while the slightly detuned engine package is more than potent enough to impress, I found it hard to ride the new Confederate Speedster anywhere near as enthusiastically around turns as I did its predecessor, and the main reason for that is the sense of detachment you get from the riding position. I knew the essentially unchanged chassis package was plenty capable enough to let me get the lower frame rails rubbing on the tarmac, but the rather strange way I had to sit on the bike didn’t lend itself to that.

The ultra-effective Beringer front brakes with their Monobloc calipers still stop this pretty heavy package (230 kg half-dry) from high speed as well as it did before. The previous Marzocchi 50 mm fork has been replaced by a fully adjustable 48 mm WP setup, which eats up bumps and surface irregularities with little fuss and less noise – there are fewer rattles and rubbing sounds from this finer-finished new model.

The Confederate X132 Hellcat Speedster has taken several steps up the ladder of excellence in terms of fit and finish and perceived quality: the carbon fuel tank is a thing of beauty, and the S&S engine seems quieter and more sophisticated than before. But I can’t help thinking that in revamping the motorcycle to suit his perceptions of what Confederate’s cruiser customers are really looking for, Pierre Terblanche has missed the goalposts. The whole point about Confederate’s products is that they run counter to the perceived norm of what a U.S. cruiser should be like – the Art of Rebellion is a good catchphrase to describe its product ethos, because it’s in so many ways the opposite of Harley’s or Indian’s.

While there may perhaps be some Confederate customers who’ll prefer the more relaxed feet-forward riding stance, I reckon they’ll be in the minority. Matt Chambers should give customers the option of choosing the old Hellcat riding position on the new Speedster, while still benefiting from all its undoubted improvements in finish and appearance. Customers may be able to live with the fat rear tire and longer wheelbase, but many will be asking to be given back the previous Hellcat’s perfectly rider-friendly riding stance. At US$69,500 plus tax for the 65 motorcycles being constructed, it may be smart to give them what they want.