Hooligan roots in a taller package – the message may be mixed, but our feelings aren’t

The folks at Yamaha insist that the 2015 FJ-09 is not an adventure bike, and I don’t entirely disagree. The tuning fork company is calling it instead an “agile and versatile sport bike.” Evidence can be found to support either side of the argument. The main components identifying it as a sport bike are its cast-aluminum twin-spar frame, radial front calipers and 17-inch wheels, which aren’t really conducive to off-pavement excursions. Aside from that, however, the FJ-09 sends adventure touring signals with a tall seat, tall suspension, incorporated side case mounts and an industrial-looking instrument panel; it even has rather robust hand guards. According to its maker, it’s designed to compete with the likes of the Triumph Tiger 800, the Suzuki V-Strom 1000 and the BMW F700GS – and their respective manufacturers classify them all as adventure bikes.
It also looks the part, except when viewed from underneath, where you’ll quickly acknowledge the vulnerability of its low-mounted muffler.

A Big Brother to the FZ 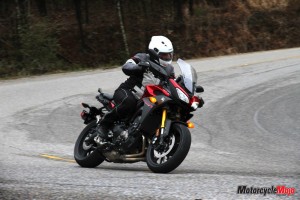 Despite all of this classification confusion, the 2015 FJ-09 is based on the FZ-09 naked bike introduced in late 2013. It uses the same 847 cc liquid-cooled inline-triple, though for 2015, the engine mapping has been tweaked to provide softer throttle response, something also done on the 2015 FZ-09, and available as a free upgrade on previous FZ models. Like the FZ, the FJ has three selectable ride modes (A, Standard and B), which offer progressively softer throttle response for varying ride conditions. The FJ also has traction control that curbs wheel spin by overriding throttle input, softening ignition timing and cutting fuel injection if necessary. The traction control defaults to the “on” position every time the ignition is switched on, but it can be turned off – in case you do venture off-road. Another feature separating the FJ from the FZ is that while the latter has no ABS, not even as an option, ABS is standard on the FJ. With all these extras, the FJ-09 costs $10,999, just two grand over the FZ-09.

Our hosts from Yamaha Canada chose Birmingham, Alabama, for the late-winter launch of the FJ-09 in hopes that the weather would be better than the deep-freeze we experienced this winter in Canada, and it was a bit better, though we nonetheless encountered overcast skies, cool temperatures and rain. Not a big deal, since the FJ-09’s frame-mounted fairing utilizes a three-position, height-adjustable windscreen with a 37 mm range, offering better weather protection than the FZ.

It’s in the Details 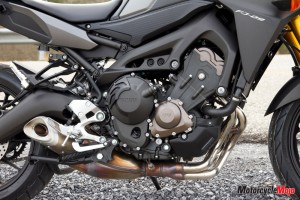 The FJ-09 has a more upright riding position than its naked stable mate, and it immediately feels like an adventure bike; there’s a very relaxed, natural reach to a wide handlebar, and the bike feels tall with a high centre of gravity. The handlebar can be adjusted 10 mm forward from the standard position by reversing the handlebar risers, and the seat is adjustable to two positions, 845 mm or 860 mm. I set my test bike to the higher position and found the ground reach reasonable with more than adequate legroom. A quick ride in the lower position revealed it gave little in the way of legroom while providing easier access to the ground, a great setup for riders measuring less than, say, five-foot-nine (I’m a six-footer). One annoying issue I discovered is that access to the side stand is hampered by the rider foot peg, which has to be folded up to reach the side-stand tab. The FJ-09 is also equipped with a centre stand, making pre-ride maintenance a breeze. And regarding more involved maintenance, it’s worth noting that valve-adjustment intervals are set at a rather lengthy 42,000 km. 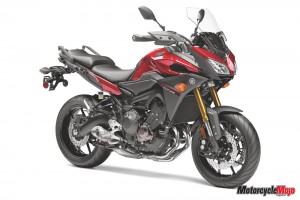 Whatever your take on the FJ-09, once you start the engine, its enticing growl immediately tickles your ears. Let the clutch out and you feel the urgency of the torquey triple. The spread of torque is very wide, and although throttle response in A mode (the most aggressive) is a bit forceful, it is nonetheless manageable. Switching to Standard mode, via the right-hand handlebar controls, softens the response a tad, and it became my preferred mode for its smooth yet muscular bottom-end punch. B mode, with its gentle throttle response, was great around town, eliminating the forward lunge I sometimes experienced when hitting bigger bumps in A mode.

Before hitting the Alabama back roads, we did a ” moderate stint on an interstate, where the FJ flexed its touring muscle. There’s more than enough power to handle a full load (a 50-litre top case and 44-litre side cases are available) and passenger, with passing in solo mode a matter of twisting the right grip without working the shifter. The screen is manually adjustable by loosening a knob on either side, meaning it must be done at a stop. The screen is narrow and protects your chest from wind but not your head and shoulders, even when in its highest position; it also produces some mild buffeting at highway speeds. You can always swap it out for the taller, wider accessory screen for more protection. The hand guards, unfortunately, don’t offer much protection from the wind, and heated grips are not standard. The FJ has an 18-litre fuel tank, giving it a touring-friendly range of about 300 km at a claimed 5.4 L/100 km.

The instruments are easy to read, if somewhat utilitarian in appearance. There are two screens, with the larger main screen showing speed, engine revs, fuel level, time and ride mode selection, and the smaller screen displaying gear position and a variety of trip info, including ambient temperature.

Finally arriving in Alabama’s backcountry, the FJ-09 revealed its true colours, as well as its sportbike heritage. Smooth, winding roads welcomed us with true southern hospitality, and the bike leaned effortlessly into successive bends with very light steering effort while maintaining unwavering stability, despite the ample leverage offered by the wide handlebar.

As stated earlier, the FJ is a tall bike, so it takes some time to transition its 207 kg – claimed wet weight – through tight esses, requiring more of a smooth, flowing riding style rather than a track-day-like point-and-shoot approach. A rigid chassis and firm yet compliant suspension return excellent road feedback and reward a fluid riding style. The suspension is adjustable for preload and rebound damping at both ends, and all I did was add three-quarters of a turn of rebound damping over the standard setting at the rear end to rid the bike of some mild wallowing early in the ride.

Its wide, flat power band prompted very little footwork at the shifter on winding roads, the FJ powering forcefully out of tighter turns from very low revs and continuing to tug on my arms as the LCD bar swept up the digital tachometer display. It rolls on sportbike-sized radial tires (a 120/70 front, 180/55 rear), which provided sportbike-like grip. Our test ride did not include an off-pavement section, so I can’t really assess the FJ-09’s off-road capability, though I suspect it will be as capable as any other motorcycle with long-travel suspension and 17-inch wheels. In other words, smooth gravel roads are probably as much as it can handle.

Breaking Down the Genre

The whole adventure bike debate is confounded mostly by the way each manufacturer portrays its adventure models in advertising brochures. Oftentimes adventure bikes are shown in off-road situations, riders standing on the foot pegs, and often with a rooster tail shooting off the rear tire in a power slide. This portrayal is appropriate for some bikes, particularly those with larger-diameter, off-road-friendly front wheels (either 19 or 21 inches).

Adventure bikes with 17-inch front wheels are really styling exercises, though their taller suspensions and relaxed, upright riding positions actually make them better at back-road exploring and sport touring than bikes designed specifically for those purposes. The FJ-09 is one of those bikes, offering excellent all around capability, from sport riding to urban trudging to long-distance hauling, without Yamaha having to label it something it’s not – though the FJ is certainly capable of handling any on-road adventure you might have planned this season.”