Choosing the path of Evolution over Revolution

Just a decade ago, if you wanted an adventure bike that could comfortably cover long distances on the tarmac or get a little dirty on logging roads and modest trails, there was a handful of choices, and two of them were Suzuki V-Strom DLs. Today, you could throw a rock and topple several fashionably dressed riders, each astride different adventure bikes, and I’d bet they’d all knock over their riding buddies’ BMW GSs on the way down.

This glut of dual-purpose motorcycles has many of the manufacturers now clamouring to give customers new toys and gadgets with which to fettle and fiddle on a yearly basis. So why has Suzuki – at one time the outright sales leader in the segment – continued to favour a methodical and reactionary evolution for the DL650? 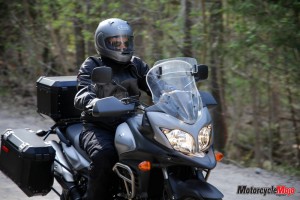 Some guy named Darwin once notably observed: Animals of the same species can adapt to their environmental conditions, resulting in changes that make them more likely to succeed. Like those now famous finches from Darwin’s writings and their remarkable adaptations, the 2015 V-Strom 650 finds itself in very competitive territory and, out of necessity, has sprouted another branch off the V-Strom family tree.

Much of the DL650 has remained unchanged since the major 2012 update, and in most cases, that’s a good thing. The instrument cluster is one of my favourites, with a large centrally mounted tachometer and a proper needle to watch swing toward the red, and the digital portion is clear and easy to read.

Covering long distances on the DL has always been a pleasure, and that’s another reason I’m glad they haven’t messed around with it too much. This could be one of the best seats ever, and it’s narrow enough at the front to allow even me, at five feet seven inches with a 30-inch inseam, to get more than just my toes on the ground at a stop.

The controls and switchgear are familiar and could be called classically Suzuki. The handlebar on the DL650 has always been awkward for me, placing my hands too close together. Then again, I prefer a wide bar and would install one if this were my everyday ride and I intended to do some adventuring. It just makes standing on the pegs more comfortable, allowing me added leverage, and given this new bike’s aspirations, I think people will be spending a lot more time standing up on the 650X than on any prior V-Strom.

The new-for-2015 DL650X ABS EXP is the first of the DLs to take that step toward being a proper on/off-road bike, and at first glance, Suzuki appears to have put together a pretty comprehensive package for customers in search of a ready-to-ride adventure bike. Included with the 650X EXP version are the adjustable Vario windshield, hand guards, bash plate, engine guards, and aluminum panniers with brackets and the top box. Oh, and of course it also comes complete with the now standard calling card of the category: a beak.

Beginnings of the Beak 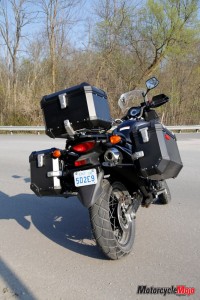 It should be noted – and often is by Suzuki representatives – the first beaked bike appeared in the form of Suzuki’s DR-Z competing in the 1988 Paris-Dakar rally. For 2015, the DL650X borrows from the past, sprouting a beak of its own, which, when viewed from the side, causes the V-Strom’s profile to bear an uncanny resemblance to the Toronto Blue Jays mascot, Ace.

Celebrity doppelgänger status aside, the look isn’t unattractive, especially when your gaze descends to the new-for-2015 spoked wheels, carrying tubeless Bridgestone Trail Wing dual-sport tires. These wheels are lighter than the cast variety found on other DL650s, and do a better job of soaking up hard impacts and resisting damage from said jolts.
Admittedly, spoked wheels have been on the DL owner’s wish list for a long while, but that wait has made them all the more sweet, and after a few days of tooling around, both on and off-road, I can say unequivocally, it’s about damn time.

The stock Trail Wing tires do a fine job on the road, providing good dry-weather grip, and they dealt with gravel roads and hard-packed dirt trails with ease. In stock trim, it’s best to avoid deep sand or mud altogether, as those should be left to more off-road-oriented tires; thankfully, the new larger 19-inch front rim opens up a bigger selection of rubber for just such intentions.

Equally adept at handling a variety of duties are the spring-preload-adjustable 43 mm front fork and link-type rear suspension with rebound and spring preload adjustment. “Gliding over bumps” is the description that kept popping up in my ride notes, though I did make a couple of adjustments right off the bat, based on many hours aboard the current generation V-Stroms.

Cranking up the rear shock’s preload has been my standard practice when getting on any DL over the years; it helps the bike to settle faster after large bumps, especially with luggage or a passenger on the back. The five-position knob is easy to reach and took just a couple of turns to find the right setting.

The suspension at the front is composed, requiring only a small tweak on the spring-preload adjuster to firm up the ride and limit some of the tendency to dive under braking. This fairly basic suspension handled washboard-rippled surfaces on the worst of back roads, and I never managed to stress it enough to find a complaint. 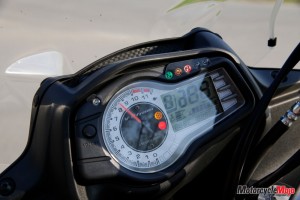 Dual 310 mm front discs and two-piston calipers feel like old friends who’ve almost outstayed their welcome, but you wouldn’t doubt them for a second in a jam. Feedback at the lever is good right up to the moment mild pulsing from the standard ABS kicks in, taking most of the drama out of panicked stops.

The rear brake works well on the road, and I found myself using it often. In the dirt and on gravel it feels really good, even with thick-soled boots on, and the ABS pulses just enough to let you know it’s working. The ability to deactivate the rear ABS would be my number one request of Suzuki’s engineers, just so the back end could be slid around to aid tight turns on loose surfaces.

Punching out approximately 68 peak horsepower and 44 ft-lb of torque, the V-Strom’s venerable 645 cc dual-spark 90-degree V-twin has all the character, practicality and performance that a middleweight motorcycle could hope for. According to the marketing material, engineers have focused on producing strong bottom-end and mid-range power, which when referring to a V-twin is like saying the giraffe has the best view at the zoo. Where those statements become less obvious is in the saddle while grabbing a handful of throttle in third gear, just off idle; even with the luggage bolted on and my 200 lb frame in the saddle, the “wee-strom” still managed to sprint from 40 to 100 km/h in about four seconds. And when repeating the roll-on exercise in fourth and fifth gears, the result was expectedly slower, but similarly impressive.

Besides the new wheels, my favourite change to this generation of V-Strom is the single key that operates the locks on the panniers and the top box. No more individual keys for each box – there’s now one to rule them all!

The aluminum boxes all open from the top and have robust gaskets to seal out moisture. One of the side cases is smaller to accommodate the exhaust, but with three bags in total, there’s more than enough room to carry any reasonable load. Unfortunately, they stick out a good 12 cm past the bar ends on each side and make negotiating tight spaces interesting. On a positive note, they prop the bike up nicely when it’s fallen over.

Picking a bike back up, dusting it off and carrying on is something many DL owners have experienced. Come to think of it, there are probably very few places in the world where that hasn’t happened. One of the great benefits of V-Strom ownership is the huge number of fellow owners happy to share information, advice and support. The model’s long track record is very much due to the people who continue to purchase it. And how many times have you heard someone say, “I hate my V-Strom”? Probably never.

Everything about the 2015 DL650X ABS EXP works well, from the comfortable and slim seat to the odd but effective Vario windshield. It’s all been honed over time through the feedback of an army of fans.

Suzuki could very easily bestow it with the best of everything cutting edge, but the company knows full well that if it ain’t broke, don’t go and make it cost twice as much. And there’s the reasoning behind the V-Strom’s evolutionary track. While others are trying to lure buyers with high performance at high prices, Suzuki is offering value and competent performance, just as it has since the model debuted in 2004. This 2015 V-Strom DL650X ABS EXP takes all the good that came before and adds a little more, without screwing with the formula.

It’s not always the fastest, the strongest or the most conspicuous of the breed that succeed; often it’s the ability to endure, and the DL650 does just that. As a result, consumers naturally continue to make this bike their selection.