Faced with a wide range of Ducatis, Costa had to choose his favourite. Even he was surprised at his decision

Unlike usual corporate launches, Ducati North America invited a handful of Canadian journalists to California to sample a range of Ducati models. The bikes included the Diavel, Hypermotard SP, Hyperstrada, Monster 821 and 1200S, Panigale 899, and Scrambler Icon. This wasn’t a tightly scheduled affair with press briefings and buffet dinners; it was a ride among friends along some of Northern California’s best roads, with stops at a few noteworthy establishments. We rotated through the machines over two days, getting an opportunity to experience the differences between them. The ride gave me the opportunity to rank my personal favourites, and I was surprised by my choices. Guide duties were handled by Ducati North America PR manager Nathon Verdugo, who is an avid rider, and whose motocross background had served him well as a former development rider for Aprilia, where he helped develop the RXV 450 and 550 enduros. 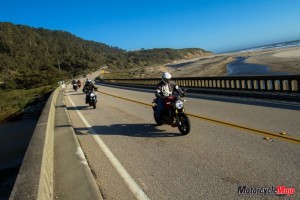 After a dizzying stretch of tree-lined switchbacks, we arrived at a California motorcycling landmark. You’ve likely heard the song by Arlo Guthrie, and have maybe even seen the iconic 1969 film of the same name. Alice’s Restaurant, in Woodside, is perhaps mistakenly believed to be the basis of Guthrie’s satirical monologue, but the song and the movie were actually based around a short-lived restaurant in Massachusetts. This west coast Alice’s Restaurant dates back to the early 1970s and is a homage to the song, as well as its owner, Alice Taylor. The restaurant is located at the intersection of Highways 84 and 35, and is a busy motorcycling hangout as well as a great lunch stop. Its menu includes breakfast items like the Ducati, consisting of toast, eggs and applewood bacon, and lunch items like the BMW burger, the Kawasaki burger, the Honda burger – the list goes on down through the manufacturers, each moto burger garnished differently. Ducati North America CEO Dominique Cheraki joined us for lunch, riding in on his Monster 1200S. Frenchman Cheraki is a former endurance racer, and having ridden with him at a previous Ducati launch also in California, I was looking forward to the post-lunch ride. 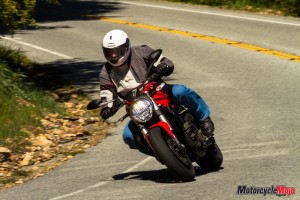 After lunch, I switched to the Monster 821 and filed in fourth behind Cheraki as we left Alice’s parking lot. The small Monster shares the same 821 cc liquid-cooled Testastretta engine as the Hyperstrada, but sits lower and is a more traditionally styled naked bike. And it’s much more capable on winding back roads than is the Diavel. Cheraki’s riding style reflects his endurance-racing background, and as soon as we left the parking lot, he took off as if he were trying to escape us. It required my full attention to keep pace, and I was amazed watching him pitch the bike into corners at speed with flawless precision. Usually at this elevated sporting pace, a rider who isn’t following the lead of another can make the occasional mistake, like maybe running wide in a decreasing radius turn and then correcting to maintain the proper trajectory. Cheraki rode with mechanical precision, always at the right spot at the right speed, while I used his cues to keep the pace. I used all of the Monster’s 112 hp to connect the corners, and its neutral steering and well-balanced platform put it near the top of my list of favourites among this group. It’s only when we hit town and stopped to wait for the others that I learned that Cheraki knew the road well, for it led to his home and he used it daily. He’ll be moving his family to Bologna, Italy, in January 2016, where he’ll take on a new position as network development director at the factory headquarters. I hope this leads to more rides with him. 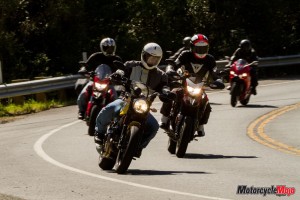 At this point, the busy CEO left us to head back to the office, while we continued on with our job of riding in the hills of California. Coincidence placed me on the Monster’s bigger brother, the 1200S, for the ride back to Half Moon Bay. Sharing ergonomics and a well-balanced chassis with its little brother, it also shares the same 1198 cc powerplant as the Diavel. Although at 145 hp, it’s 17 hp down on the Diavel and it weighs 30 kg less. This made it the most brutal bike in this group, easily capable of power wheelies in fourth gear. Admittedly, it was more of a handful to ride than the Monster 821, and its firmer Öhlins suspension bounced me out of the seat on sharp bumps, but it was also a grin-charging beast that actually proved quite tame in town. Its combination of balanced handling and outright power put it in the number two spot on my list.

The next day was spent mostly along the coast north of San Francisco. On this day, I began on the Panigale 899. It coped well with the more open expanses of the Pacific Coast Highway, but was very demanding when the highway became tight and serpentine as it turned inland past a picturesque stop called the Muir Beach Overlook.

The Panigale’s narrow handlebar and supersport crouch combined to make steering quite heavy in the tighter sections. This bike will absolutely excel in a controlled environment, like at a racetrack, and especially when being ridden at the very limit of control, but on winding roads at a sporting street pace, it proved too firm and too physically taxing to ride comfortably. That is why, surprisingly, it made it to the second-bottom rung of the ranking ladder, just above the Diavel.

Our lunch stop for the day was at Nick’s Cove Restaurant and Oyster Bar, a seaside establishment located in Marshall. Not surprisingly, its speciality is seafood, and it also offers quaint rental cottages propped on posts along the shore that offer a marvellous view of Tomales Bay. Plus, there’s direct access to the wonderfully winding Highway 1.

You’ve probably noticed that I haven’t yet mentioned which bike made it to the top of my list. It turned out to be the last bike I rode, the Scrambler Icon.

We took several winding roads back to Half Moon Bay, and the pace by then had become obscene. Although at 75 hp the Scrambler’s 803 cc air-cooled twin was the weakest of the bunch, the bike had no problem staying behind Verdugo, who was leading on the Panigale 899. Its light, neutral steering inspired confidence, and despite Verdugo’s tire-cooking velocity, the Scrambler was the easiest bike to ride, though its ultra-wide handlebar did induce an occasional minor weave at high speed. Its suspension managed all manner of bumps with plush compliance, while allowing the bike to arc through sweepers wallow-free. I immediately connected with this machine, and to me, its styling was the simplest yet freshest of the bunch. Add to that its low cost ($9,299), and it’s no wonder I wished I’d spent more time riding it.

Alas, our ride among friends came to an end soon after we made a final stop at the Golden Gate National Recreation Area, where we took in the astonishing view of the famed Golden Gate Bridge. I hope Ducati North America makes this an annual event, because while two days of spirited riding revealed a landscape as varied as the machines we were riding, I left longing for more.

Missing from our California ride was the latest Multistrada 1200, though we did ride it earlier at a press launch in the Canary Islands.

This third-generation Multistrada arrived in 2015, and the most significant change was the new 1198 cc Testastretta DVT engine with variable valve timing, a first for Ducati. It was up 10 hp on its predecessor, claiming 160 hp, while fuel consumption was reduced by eight percent. The bike also gained lean-sensing traction control, cornering ABS and wheelie control, all of which offer several levels of intervention. Valve service intervals increased to 30,000 km.
Variable valve timing broadened the torque band, but it also reduced the low-speed shuddering of the previous model. The Multistrada can now be shifted into top gear at 90 km/h without experiencing the quaking of the former model.

Although the BMW S1000XR boasts the same horsepower, the ’Strada has more low-end torque, and in Touring mode, it blasts forward when the throttle is twisted; it pulls harder than any adventure bike I’ve ridden to date. Sport mode transforms the bike into a sportbike-chasing back-road weapon, especially so with my 1200S tester, on which Sport mode also firms up the suspension. The base suspension features full manual adjustability at both ends.

For 2016, Ducati has added more off-road capability in the new Multistrada 1200 Enduro. It features steel spoked wheels: 19-inch up front and a narrower 17-inch out back for added adventure-tire selection. Suspension travel has increased to 200 mm (from 170), and it has a 30-litre fuel tank, boosting range to more than 450 km. The fairing side panels are made of aluminum for better impact resistance. Added to the electronics package already available is Vehicle Hold Control, which keeps the bike from rolling backwards when taking off on an incline, designed to ease uphill starts on a fully loaded machine.