It’s odd how manufacturers of all types of passenger vehicles automatically size up with each generational upgrade; with cars, it’s scaling up bodies for additional interior space, and with motorcycles, it’s moving up the horsepower scale. Even 250 cc entry-level bikes are not immune to this upsizing, and are now 300s and larger. Ducati’s once “middleweight” supersport has gradually grown over the years, going from 748 cc, when introduced in 1994, to 898 cc by 2014 in the 899 Panigale. 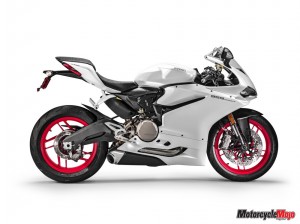 The original Ducati 748 was a true middleweight, comparable in performance to Japanese 600 cc supersport machines. Not that long ago, the 600 road-race class fielded the biggest starting grids, but after the economy tanked in 2008, so did 600 supersport sales – twentysomething buyers no longer had enough disposable income to indulge in such frivolities. Race grids shrank, Japanese manufacturers dropped the two-year life cycle of middleweight supersports and competing manufacturers moved on, no longer restrained by race-class homologation.
The middleweight supersport class has since become populated by 636 cc fours, 675 and 800 cc triples and 898 cc twins. 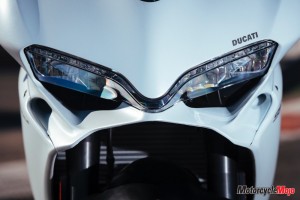 For 2016, Ducati has upgraded the 899 Panigale, becoming the 959 Panigale and, you guessed it, growing in displacement and output. We were in Valencia, Spain, to ride this latest Panigale, at Circuito Ricardo Tormo, to see if this new “supermid” makes sense, since it’s now rubbing shoulders with open-class machines.
The increase in displacement comes via a 3.6 mm increase in stroke, though that alone doesn’t account for the increases of 9 hp (now 158 hp) and 6.2 ft-lb of torque (now 79.2 ft-lb). As on the 1299 Panigale, the exhaust header diameter is now 60 mm, and a showerhead fuel injector has been added atop each throttle body. Air flows into the engine through a freer-flowing air filter; valve adjustment intervals are set at a reasonable 24,000 km.

Gearbox ratios remain the same as on the 899, but a slipper clutch has been added and combines with the previously available electronic engine-braking control to reduce rear-wheel chatter on corner entry.
North American bikes need not abide by Euro 4 emissions standards . . . yet, which explains the use of the underbelly exhaust system. European models now have twin upswept mufflers to comply with the more stringent European standards, and they also add weight. We can yank on our suspenders and boast that our bikes weigh 195 kg wet, five kilos lighter than their European counterparts, and only two kilos over the 899.

The fairing has been widened a tad and the windscreen is a bit taller for improved aerodynamics, and the foot pegs are the same machined billet items used on the rare and pricey 1199 Superleggera. Chassis geometry is mostly the same as on the 899, with the exception of the wheelbase, which is a scant 6 mm longer, and the swingarm pivot, which has been lowered 4 mm to improve corner-exit grip. Suspension is fully adjustable at both ends, with Showa providing the 43 mm inverted fork, and Sachs providing the single rear shock. 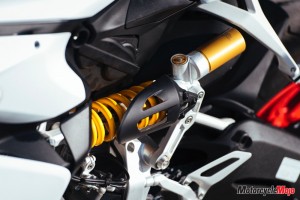 The last Panigale I rode was the 1299S, which was somewhat brutal and taxing to ride – both physically and mentally, and terrifyingly fast. I was therefore relieved to learn during the technical presentation that the 959 was designed to be easier to ride and meant to be an “everyday sport bike.” Well, the first part is true; the second, fantasy.

This mode offered softer throttle response than Race mode, while allowing access to the full 157 hp, unlike the 100 hp Rain mode. It also lowered the traction control and ABS thresholds from Race mode, supposedly to make it easier on us in the early morning so we could gradually get up to speed as the day progressed.

Well, moto-journos are not known for their judicious nature, and within two laps on the cold pavement, we were riding at a nine-tenths pace. While the throttle control and traction control proved just fine at this pace, the ABS proved problematic. In Sport mode, the ABS threshold is set low for added safety on the street, but in this setting, it proved detrimental to maintaining a fast racetrack pace. Trail braking over ripples deep into a corner triggered the ABS too soon, which stretched out the braking distance. This caused late, heart-palpitating corner entries, especially going into left-hand Turn One off the 900-metre-long front straight at an indicated 260 km/h.

After returning to the pits with bikes and riders intact, we were allowed to switch to Race mode, easily done using the dedicated buttons on the left-hand switch assembly and the menus in the dash display. Race mode raised all the electronic intervention thresholds to racetrack level while providing more aggressive throttle mapping. In this mode, the brakes were still governed by the ABS, though it now became invisible, only triggering a couple of times when I deliberately braked excessively hard to test its threshold. The brakes now inspired confidence, slowing the bike hard with an easily modulated brake lever. The slipper clutch also made corner entry easier, even though I had left the three-level engine braking in its lowest setting, allowing maximum engine braking. The throttle was a bit sensitive in Race mode, needing occasional mid-turn readjustment, especially in Turn Five, a sweeping third-gear right-hander.

The 959 Panigale has an electric quick shifter to allow full-throttle, clutchless gear changes, and unless you leave your foot on the shifter a tad too long after an upshift, it works very well, providing effortless, lightning-quick gear changes. The downside is that it doesn’t work on the downshift, something I’ve sampled on other bikes, including the 1299, and can attest that it makes corner entry easier, as well as contributes to lower lap times.

Our hosts scheduled unusually long riding sessions, 20 minutes instead of the normal 15, and it soon became obvious the 959 was much less taxing to ride than the 1299. Power delivery, although quite strong, doesn’t overwhelm and comes on in a very linear manner, unlike the explosive 200-plus horsepower 1299, which seemingly wants to catapult you off the seat every time the throttle hits the stop (actually, that’s more of a perception, because the 1299 has wheelie-control software). After four 20-minute sessions, I’d determined that the 959 was indeed much easier to ride than the 1299, and could easily spend a day in its saddle lapping a local racetrack, something I can’t say about the concentration-sapping 1299.

Ducati’s claim that this is an everyday sport bike really doesn’t pass muster, for this is a true supersport machine. To get the most out of the Panigale, owners should plan on participating at local track day events – they can even add the optional Ducati Data Analyzer (approx. $650); this on-board system stores data from the bike’s various EFI sensors, and uses GPS to record lap times and other track-related info for later analysis.

After my final session, I got off the 959 satisfied with its added performance over the 899, but a little confused about its placement in the universe – being a direct ancestor of the 748, it was once considered a middleweight machine, but it’s now grown to just a few cubic centimetres shy of a litre bike. It emphasizes just how much manufacturers have pushed the open-class envelope, with those machines now producing in excess of 200 hp. One wonders what
the next generation will bring, because adding just 43 more cubic centimetres of displacement to the bike will officially garner it open-class status (most inline four-cylinder supersports displace about 1000 cc).

Regardless of where it fits in the market, the 2016 Ducati 959 Panigale is nonetheless an excellent track day machine, with open-class performance in a more manageable package. And, at $15,995, it costs a whopping $5,400 less than the 1299. Unless you’re addicted to horsepower, the 959 Panigale is the better choice.”