It’s near-impossible to make waves in the adventure/sport touring market at the moment with the glut of new and existing models from the likes of . . . well . . . everyone! Luckily, the Mojo staff had the opportunity to test virtually all of the new class, but there was one bike that kept popping up in conversations, both last year and this year – one that’s flying below the radar of the bike-buying public and for some reason continued to elude us. That is, until Kawasaki sent an invite to its Ninja Experience Tour at Toronto Motorsports Park, where a couple of sedate laps aboard the Versys 1000 left me even more determined to get one on the road. 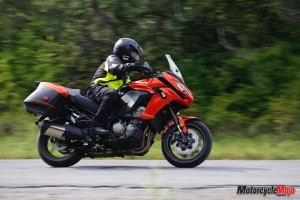 Near the end of the 2015 season, we finally got our hands on the redesigned 2015 LT variant, with its removable saddlebags and Candy Burnt Orange paint, and promptly set out on a week of touring and testing.

While the first iteration of the Versys 1000 looked to some (myself included) as if they threw a can of ugly all over the front fairing and then mounted the world’s most obvious radiator just below to distract the eye, this new bike looks much more like the rest of the firm’s sporting motorcycles. And I use the word “sporting” in the truest sense, as just behind the adequately disguised radiator is a 1043 cc motor, whose roots stretch way back to the original bad boy of sport bikes, the ZX-9R. 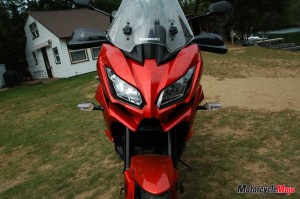 Like those found in the Z1000 and Ninja 1000, the Versys’ mill is the same horizontally mounted inline four-cylinder, in this case, producing 118 hp and 75 ft-lb of torque. The low-end power is impressive for a four-cylinder, and when coupled with a silky power delivery, virtually no vibration, a light clutch and slick six-speed gearbox, the Versys is the most effortless big-bore bike I’ve ridden. Just roll on the gas in whichever gear suits you and ride the broad power band, leaving behind most anything lined up next to you. Roll-on tests in second gear from 40 km/h to 120 km/h took just four seconds; in third gear, the results were only about a second and a half slower. This means the six-speed gearbox – as good as it is – doesn’t need much stirring to make a pass in traffic.

Now, I realize that not everyone is looking for litre-bike performance in a motorcycle meant to tour, but as the name implies, this is a Versys (Versatile System) and it has many abilities, as I soon discovered.

Having unearthed the bike’s brutish side, it was time to load up the easily detachable and lockable saddlebags for a trip into the wilderness. Since day one of the Versys 1000 model, I’ve admired the rear sub-frame’s integrated bag mounts. Simply hook the bags in, then slide the locking tab in place and, voila, touring bike. With them removed, there’s virtually no sign bags can be accommodated. Though they make the bike a bit wide for tight places, the saddlebags carry a respectable load for weekend jaunts, and should you need more, there’s a 47-litre colour-matched top case available as an accessory. 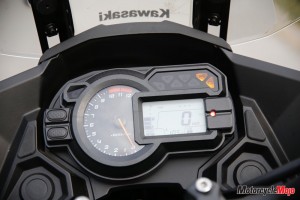 Even fully loaded, the Versys’ axiom is effortless: steering inputs on the bar yield immediate results, the bike belying its wet weight of 249 kg. I’m still not sure how they’ve managed to disguise the mass of an inline-four perched up there on the long travel suspension. On public roads, it’s planted and communicates the exact level of grip available, even when lean angles become extremely acute; you’d have a hard time going more quickly on any other bike. Sure, many are more powerful, lighter, livelier or more agile, but that doesn’t always translate into the kind of confidence and surefootedness afforded by the Versys.

A good deal of the composure comes from a 43 mm inverted front fork with separate function: the right leg taking care of damping and the left leg managing the spring preload. The rear shock is adjustable for rebound damping and has remote spring preload adjustability for quick access when needing to accommodate heavy loads or passengers. I had the back set on the soft side for most of my time with the bike, but cranked up the preload and damping at one point, and immediately noticed less squat on acceleration and less of a tendency for the front wheel to get light. Another major factor in the bike’s calm demeanor is a rigid frame that handles heavy loads and passengers with ease, instead of becoming vague and feeling as if a hinge has been installed somewhere midship.

In terms of rider accommodations, the Versys sports a wide, comfortable saddle for both passenger and rider, and all the controls, which fall easily to hand, are low in effort. Wind protection comes courtesy of an easily adjustable windshield with step-less adjustment; just loosen the knobs by hand, slide the shield to your preferred location and tighten them back up. Shorter riders will find good wind protection, while those approaching six feet and over will notice some buffeting at eye level, regardless of the shield’s location.

The display on the Versys 1000 contains most of the important stuff, like a fuel gauge, engine temperature, trip meters, odometer, speedometer, tachometer and the status of both the traction-control and power-mode settings. Selecting one of two power modes is accomplished via a switch mounted on the left handlebar that also controls the three-level traction control. Aside from a few comparative roll-ons in the reduced power mode, I kept it in the full-power setting for the duration. Dropping 25 percent of the power at the push of a button would be a novel idea, if the Versys wasn’t already butter smooth, and the multiple levels of traction control (TC) didn’t already rein in any wheel spin. Where the TC really shines is on rough gravel roads, of which I sampled many. Rolling on the gas hard in full power mode with the TC on results in controllable and rapid forward progress – the TC light happily blinking away. Turn the TC off and you’re left to interpret grip levels and let the rear spin up as desired.

Though the Tokico four-piston calipers on the 310 mm petal-style front rotors have been around a while, and may not be cutting edge, they do an admirable job hauling down the Versys, never leaving me wanting. The rear single-piston caliper and 250 mm rotor, on the other hand, needed a long travel and a fair bit of pressure from my right boot to get proper effect, but once working, there’s lots of feel before the ABS actuates. And even when the ABS kicks in, front or rear, only a slight pulse can be felt at the controls as the bike comes to an uneventful stop.

For those on a budget but keen on the adventure/sport touring segment, the 2015 Versys 1000 LT is the bargain of the bunch at $14,499 (2016 Versys 1000 LT retails for $14,999). Real-world performance is on par with even the most expensive European competition – unless you’re an extremely experienced rider and like to get every ounce out of your ride. (In that case, you’d be more than doubling every speed limit in the country and would eventually end up on the evening news from the eye-in-the-sky perspective with a trail of red and blue flashing lights behind you.)

For the technophiles out there, this is not the advanced uber-bike of your dreams; with only three levels of TC, two power modes and no adaptive suspension or cornering ABS, the Versys 1000 LT is about as basic as the segment gets. Buyers will, however, get class-leading comfort and an eminently capable machine – and did we mention that engine! There’s a reason its roots go back as far as they do. Just ask any ZX-9R, Z1000 or 1000 Ninja owner what he or she thinks of the powerplant, and prepare to be there a while.