Cruiser is not a word that is synonymous with Ducati. The company is better known for its MotoGP and World Superbike endeavours, with the knowledge gained through those competitions trickling down to its Monsters and Panigales, and even its Multistradas. But the motorcycle maker based in Bologna, Italy, has officially produced a cruiser, though it’s not the firm’s first foray into foot-forward frolicking. If you’re old enough to remember the 1980s, you might remember an obscure Ducati called the Indiana, which was actually built by the company’s then owner, Cagiva, and sold in the States. 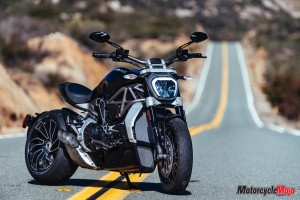 The buckhorned, stepped-seat Indiana never made it to Canada, and it didn’t fare too well south of the border, where it only lasted a couple of years before being dropped from the line-up and forgotten. If you visit the historical model section of Ducati’s website, or are fortunate enough to visit the factory museum in Italy, you won’t see any mention of the Indiana.

The 2016 XDiavel, Ducati’s first bona fide cruiser since that ill-fated bike, will be much more memorable. This beast of a machine, which I’ve been invited to ride in sunny San Diego, is a cruiser like no other. It’s an Italian take on a North American motorcycling phenomenon, and even though Ducati has embraced the tagline “Low-speed excitement” to emphasize its penchant for boulevard crawling, riding it reveals that those Italian translators probably misunderstood the definition of “low speed” when translating their marketing literature.

An All-New Diavel Despite its name linking it to the Diavel, the XDiavel is all new, sharing only calipers and tires with its muscle-bike stable mate. It has a 25 mm longer wheelbase (at 1615 mm), a 15 mm lower seat (at 755 mm) and two degrees more rake than the Diavel. Common on a typical cruiser but an all-new feature for a Ducati is belt final drive. 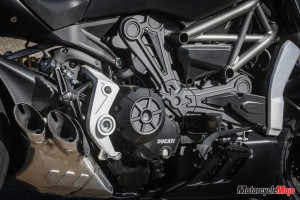 Its Testastretta DVT (with variable valve timing) is an all-new variation of the Multistrada’s engine, stroked to 1262 cc from 1198 cc, and redesigned with no external coolant hoses between the heads for improved aesthetics. It’s also retuned to produce much more bottom-end torque. Despite producing slightly less peak torque than the Diavel, it reaches its maximum of
95 ft-lb at just 5000 rpm, a full 3000 rpm lower.

Swinging a leg over the XDiavel reveals a low seat with an easy reach to the ground, the reach to a wide handlebar is relatively modest and a cruiser-typical forward stretch to the foot controls. I don’t care much for the feet-ahead riding position, but the good news is that if you’re like me, you don’t have to live with it. Ergonomics are adjustable to 60 different positions via three different handlebars (+25 mm and -25 mm fore and aft options), five different seats (four optional, including +20 mm and -10 mm heights) and four-position foot-peg mounts (+/- 22 mm
from standard, and optional mid-mounted foot pegs).

Once the engine fires, it doesn’t feel or sound particularly menacing, producing a low-pitched, syncopated rumble. Put the bike into gear and give the throttle a good twist, however, and you’ll immediately discover what it feels like to be fired from a cannon. Those comical folks at Ducati must have been joking about the “low-speed excitement” bit, because the XDiavel is an absolute brute under acceleration. It’s a good thing the seat is deeply cupped for support, because I can’t remember having ever ridden a street-legal bike that has such a ferocious forward rush. It even has a three-level power launch mode among the selectable ride modes, in case you want to rocket forward from a stoplight like a projectile. They should have named the bike XCatapult.

Civilized in the SoCal Hills 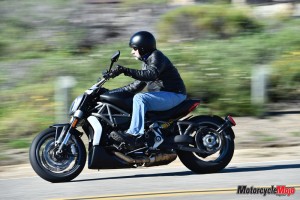 Despite its brutish ways, the XDiavel is quite civilized as we leave San Diego for the surrounding hills of Southern California. Even in Sport mode (the most aggressive of three options), the throttle is easy to modulate – as long as you don’t roll it on too far. If you prefer a less intense riding experience, you can always switch to Urban mode, which softens throttle response and limits output to 100 hp from 156. But seriously, where’s the fun in that?

As mentioned earlier, the XDiavel is an entirely new bike, and although it looks similar to the Diavel, the styling has been altered drastically. Its frame now uses the engine as a stressed member, so the trellis portion is much smaller. Gone are the Diavel’s side pods, the bulbous gas tank flows seamlessly into the seat, and the upswept twin exhaust pipes now exit ahead of the rear wheel, exposing it completely and emphasizing the single-sided swingarm.

The real looker, however, is the XDiavel S, which comes with 12-spoke machined wheels, machined aluminum engine covers and a brushed-aluminum swingarm. It also includes a TFT colour screen instrument panel, Bluetooth connectivity, and monobloc front calipers (Brembos are on both bikes), among a few other added features, for $3,000 above the standard XDiavel’s $21,495. One item of note is that while in other markets the XDiavel S comes with a horseshoe-shaped daytime running light, Transport Canada prohibits its use here, so we just get the standard LED headlight.

Despite being a cruiser, the XDiavel is built by Ducati, and some of the company’s superbike lineage has rubbed off on it, so it comes with the aforementioned ride modes, adjustable cornering ABS, adjustable traction control and adjustable wheelie control. During the pre-ride technical presentation, I ask if the bike really needs wheelie control; it does, after all, have a longer wheelbase than the Diavel. The presenter breaks out in a grin, saying rather smugly, “You have not yet ridden the bike.”

I hear the echo of that reply again in my head when riding through a tunnel in the city, where I roll on the throttle in second gear, you know, to get some underground exhaust reverberation going. Well, all I can say is that it was a great way to illuminate the tunnel ceiling.

We ride along the winding roads southeast of San Diego, where I follow Ducati CEO Claudio Domenicali, who isn’t one to shy away from riding one of his bikes. I’m surprised at how nimble the XDiavel is. Now, “nimble” is a relative term here, as the XDiavel is by no means sportbike flickable, but the wide handlebar reduces steering effort, and the bike can lean way over in corners, to a maximum angle of 40 degrees before anything touches ground, which doesn’t happen during my ride.

The last time I rode a Diavel was last year, and I recall that bike had a tendency to stand up in corners, a side effect of the ultra-wide 240 mm
rear tire. It seems to me that this tendency is reduced on the X-bike, and it exhibits more neutral steering, not requiring constant pressure on the inside handlebar to maintain a lean – possibly due to the altered steering geometry. A back-to-back comparison would either confirm or contradict my seat-of-the-pants assessment, but the XDiavel handles winding roads better than most any other cruiser. The suspension, which is fully adjustable at the front and adjustable for rebound damping and preload at the rear, is a bit on the firm side by cruiser standards, though it contributes to the bike’s surefooted stability through sweeping turns.

The bike proves comfortable enough during our 260 km test loop, with the firm, sculpted seat providing good support. I’m not sure a passenger would be as well received, because the XDiavel has one of the smallest, most precarious passenger pillions I’ve seen in a long while. I’d advise anyone sitting on its abbreviated perch to hold on tight, because a fat rear tire waits to greet his or her buns if you use the throttle with indiscretion. The alternative, and I’d highly recommend it, is to get the passenger backrest, or you risk severing your relationship.

The XDiavel is a unique take on the cruiser genre, and I tip my hat to Ducati for breaking away from the skirted-fender, floorboard-scraping cruiser mold. We ask Domenicali what target customer he had in mind when building this unique Italian cruiser.

“We do not build bikes thinking about what market we will hit,” says the CEO. “We build bikes that excite us.” I think those Italians understand very well what “exciting” means.