You have to go slow to go fast

There’s little chance you’ll ever hear a motorcyclist say, “I think doing that racetrack training made me a worse road rider.” Instead, you’ll almost always get the exact opposite opinion. Spending time with a knowledgeable instructor in an environment conducive to experimentation – and by extension, failure – is the most efficient way to learn anything. Training on the track allows motorcyclists to overcome fear and intimidation, to explore the limits of adhesion and their own abilities. 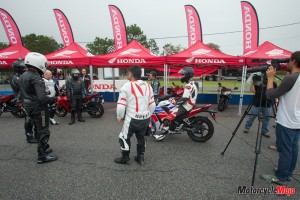 The first time on a track may have you feeling like the Tin Man, Scarecrow and Cowardly Lion rolled into one: rusty, unsure and scared as hell. But fear not! All you need to get over those worries is a bit of faith, both in your abilities and those of your chosen instructor. For some people, simply having a few onlookers to impress or hearing the phrase “ I dare you” is enough to uncork the hero inside. However, most of us need to build up to our limits and require help doing it.

Last summer, I had an opportunity to relive the feeling of starting fresh during a Honda Canada press launch with a bit of an instructional twist. While normally we’re on site to just test a product, which we were – the entire line of CBRs, in fact – this time Honda had invited a special guest along to join us journos on the track.

At that time, I hadn’t been on a track in a couple of years (the result of selling my supermoto and having become a family man). Combine that with my being in my mid-30s – which happens to be in the “target age group” for purchasers of the CBR line – and I was the perfect match for Honda’s plan to marry the press launch with an instructional component. 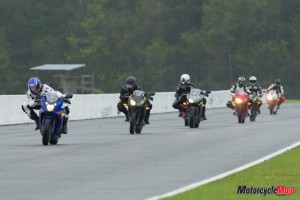 The person responsible for said instruction turned out to be Honda’s special guest coach, Jeff Haney. He’s a former factory-sponsored road racer and dirt-track rider, and has shared a paddock with, and raced against, some of the very best. He’s also coached some of the top racers, and his services continue to be retained by the sport’s biggest names.

So, basically he has a resumé and reputation that precede his presence. But the first thing people will tell you about Haney is not that he can thrash a motorcycle – because he’s already pretty famous for doing that – but just how approachable and enthusiastic he is about teaching others. And I’d like to pass some of that on to you.

His initial message on day one of our two-day event at Roebling Road Raceway in Savannah, Georgia, was simple: start slow. The bikes are cold, the tires need to warm up and the track is cold and damp. All standard stuff to consider for anyone who rides a motorcycle on Canadian roads, and it all applied here, too. 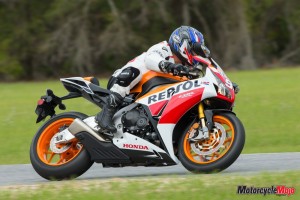 A few laps of follow the leader let us figure out the racing line and work on the body positioning Haney had gone over with us in the rider briefing just minutes earlier. Through a series of predetermined motions – motorcycle sign language, if you will – we were shown where, when and how to position ourselves around the track.

We all soon realized that he was watching us like a hawk and not just casually leading us around. After pulling into the pits, he pointed out individual habits and gave correction, having spotted all of them through those little rearview mirrors, or sometimes at mid-corner with his left hand on the throttle while looking over his right shoulder – without going off line.

I spent the remainder of the day working on my technique while making notes on the various CBRs, each lap pulling a little more out of the memory bank and depositing a bit more confidence. The variety of bikes, from the CBR300R to Honda’s flagship powerhouse CBR1000RR, added an entirely new dimension to the training. Switching back and forth between models allowed us to really feel the difference that mass, tires, suspension, brakes, power output and so on make in real-world terms and not just on the stat page. This variety also highlighted that power doesn’t equal fun. Fun is being able to use the bike’s abilities and your own to the fullest, and the CBR300R and CBR500R made the perfect companions, keeping my stress levels low and the fun factor high. A couple of days on the track may well have you taking a different, and probably more educated, approach to