The Henderson streamliner is simply irreplaceable, because there is nothing else like it

Art Deco was an innovative and ultra-distinctive style of design that spanned the boom times of the Roaring Twenties and the bust of the Depression-ridden 1930s. It was the style of the flapper girl and the office typist, of the factory worker and daredevil car driver. Art Deco was avant-garde. It celebrated the newly mechanized modern world, yet embraced both handmade and mechanical manufacture of everyday products to exclusive works of art. It was everywhere, from cinemas to skyscrapers, from luxury ocean liners to exotic automobiles – and, yes, to some motorcycles, too.

But what is arguably the most resolutely Art Deco motorcycle ever built emerged in the United States in 1935 as the one-off creation of a Michigan-based metalsmith employed at the Oldsmobile car factory. The bike was based on his 1300 cc four-cylinder 1930 Henderson KJ Streamline model. His name was O. (for Orley, which he preferred to ignore) Ray Courtney, and though little is known of him, he built a handful of completely innovative custom motorcycles during his life, their style evoking the idyllic sense of optimism prevalent in the early ’50s, of a nation basking in the contentment of the postwar era.

A Metalsmith at Work 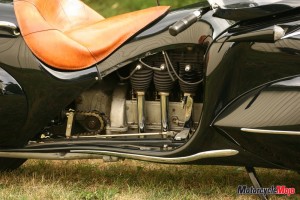 Ray Courtney rode his first motorcycle in 1908 at the age of 13, and acquired his first proper bike – a 1916 three-speed Excelsior V-twin – before joining the Army Air Corps to fight in the First World War. On his return home as a young man, he found work at Central Manufacturing in Connersville, Indiana, making body panels and fenders for luxury cars such as Duesenbergs. Later he moved to Lansing, Michigan, where he worked for the Oldsmobile Division of General Motors. He spent his life shaping metal for the prototypes coming out of these firms’ design departments, in the process acquiring a feel for the forms and styling that he’d try to adapt to two wheels. While working with metal was his forte, he also drove the drawing board pencil, making a significant contribution to the body design of the 1933 Oldsmobile F-33, today an American collectible.

The following years were a fertile time for car designers. They stopped thinking of automobiles as utilitarian transport and began treating them as a means to deliver comfort, speed and pleasure of ownership to their customers. And instead of most cars looking like a variation on the same Model T Ford theme, the importance of recognizing a brand by its styling came into play. The rapidly increasing understanding of aerodynamics that was emerging from the aircraft industry greatly influenced industrial design in other fields, from railway trains to skyscrapers – look at the Flying Scotsman, the Auburn Speedster or the Chrysler Building in New York. Streamlining became the modern design catchword, so that along with cars, trains and other products that actually moved, there were streamlined toasters, streamlined kettles and streamlined radios.