A North American icon, claimed and honoured on both sides of the border

It would have taken boundless grit and determination to dominate the early world of motorcycle racing. Primitive tracks consisted of nothing more than dirt and stones, and by the latter part of the first decade of the 1900s, motorcycles and their riders were defying gravity on wooden board tracks. Essentially highly banked oval tracks constructed of planks, these temples of speed evolved from the popular culture of bicycle racing, where pedal-powered two-wheelers raced on less steeply banked wooden velodromes.

One of those brave riders was Jacob (Jake) DeRosier. It could be argued that at the turn of the 20th century, DeRosier was the fastest man on two wheels. Born in St. Ulric, Quebec, on December 10, 1879, he didn’t get to spend much time in this tiny village located on the St. Lawrence seaway on the west side of the Gaspé Peninsula. Even though he was four when his family moved to Massachusetts, we’re referring to DeRosier as a motorcycling legend from Quebec. 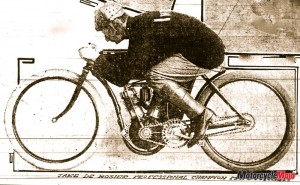 A quick study in speed, as a teenager DeRosier became involved in bicycle racing, and by late 1897, when he turned 18, he was one of the fastest pedal pushers in New England. By all accounts, DeRosier cut a diminutive figure – slight and extremely lightweight. However small he might have been, DeRosier had stamina unmatched by his peers.

His passion for bicycle racing afforded him the opportunity to meet French auto racing and motorcyclist Henry (this is how he spelled his name, but many sources use Henri) Fournier – who was eight years DeRosier’s senior.

Fournier was born in Le Mans in 1871, and by the late-1800s had gained a reputation as a pioneering motorcycle racer. Notably, Fournier also spent plenty
of time in the United States riding “pacers,” or, more specifically, specially designed motorcycles that bicycle racers rode behind to benefit from the subsequent slipstream effect. While drafting the pace motorcycle, bicycle racers hoped to obtain speed records on the wooden velodromes. This paced-bicycle style of racing quickly caught on, and crowds flocked to see the action. 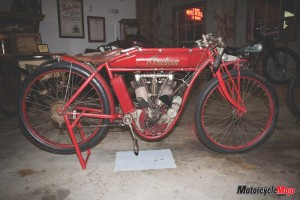 DeRosier met Fournier in 1898 at a bicycle race and was soon allowed a turn aboard a motorized pacer; just as he had proven adept at pedal racing, DeRosier quickly learned how to handle a pacer. His talents at handling a motor pacer were in demand by bicyclists eager to have DeRosier pace their events, and by 1901 he was working with talented pedaller John Nelson.

According to the Canadian Motorcycle Hall of Fame, it was at a race with Nelson that DeRosier was introduced to C. Oscar Hedstrom – another man who was making a name for himself in the world of bicycle racing. Hedstrom was a keen cyclist, and in the 1880s had apprenticed at a watchmaker’s
shop. This experience gave him the background to become a skilled metal craftsman; by 21, he was a journeyman who began building first-rate bicycles. Following on the heels of the lightweight and more durable bicycles he built, Hedstrom started experimenting with internal combustion engines, fitting them to frames to make sturdy and reliable tandem pace machines.

Enter George M. Hendee of Springfield, Massachusetts, who was building bicycles and sponsoring races under the Hendee Manufacturing Company name. Paced bicycle races had gained in popularity, and Hendee was interested in Hedstrom’s motorized tandems. When he invited Hedstrom to show off one of his pacers at the Hendee Manufacturing headquarters, Hendee was thoroughly impressed. He encouraged Hedstrom to design a motorcycle, and in 1901, a 1.75 hp prototype of what would become the famous Indian Motocycle was constructed.

This is when DeRosier became involved with the nascent Indian company. After being introduced to Hedstrom, DeRosier rode Hedstrom’s pacers and also briefly worked at the Indian factory before moving on to a different job. However, DeRosier recognized the quality of the Indian motorcycle, and often favoured riding the marque in the variety of competitive events. He was a formidable opponent, and fast. His lightweight build allowed the low horsepower engines of the day to propel him to greater speeds.

In 1908, the Federation of American Motorcyclists (FAM) awarded DeRosier the national championship in Paterson, New Jersey. With that success under his belt, DeRosier became a sponsored rider for Indian Motocycles, making him one of the very first factory-supported racers. With Indian’s full backing, he went on to achieve hundreds of victories.

Given the success of paced bicycle races on banked wooden velodromes, motorcycles began racing the same tracks. However, as speeds increased, it was readily apparent the much more powerful two-wheelers required a steeply banked track – at close to 60 degrees, as opposed to the 25 degrees of a bicycle velodrome.
And it wasn’t long before smart businessmen realized the potential of motorcycles competing on board tracks. One of these men was racing promoter Jack Prince, who paid DeRosier to attend inaugural openings of board tracks across the country – but the racing activity was punishing, to say the least. 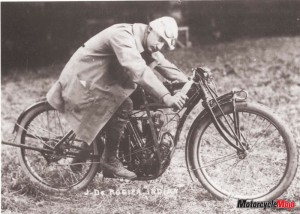 Built for nothing but flat-out speed, board-track racing motorcycles were a study in minimalism. They had only top gear and no clutch, brakes or suspension. Usually, there was no throttle; the carburetor was set wide open, and if a rider had to slow down, a handlebar-mounted magneto cutout was used to ground the spark plugs. Forward momentum, of course, was hardly halted.

Engines had short, fire-breathing open exhaust pipes, and oil spewed from total-loss lubrication systems. Motorcycles routinely reached 100 mph on the wooden circuits, and the public ate up the action – no one had witnessed such speeds before. Racers became gods of velocity, but if one rider went down, the rest of the field had trouble avoiding the melee of limbs and metal. Splinters from the boards could be massive, and deaths were common. Riders wore very little in the way of safety gear, and DeRosier was famous for wearing as part of his usual attire black tights and running shoes.

In 1909, the Los Angeles Motordrome was the first purpose-built motorcycle board track, and over the next two decades across North America, the number of wooden circular and oval circuits exploded, aided by men such as Prince. In Canada, the quarter-mile Toronto Motordrome opened in late May 1915. Cars, too, raced the planks, but by the late 1920s, wooden tracks had mostly disappeared.

DeRosier’s notoriety grew through the latter part of the first decade of the 1900s, and in 1910, he set the FAM record for 100 miles at 79.6 mph. At the Los Angeles Motordrome in early 1911, DeRosier covered 90 miles consecutively,
allowing him to claim every FAM speed record from one to 100 miles. It was also in 1911 that he became part of a five-man team put together by Indian to sail across the Atlantic and contest the Isle of Man Senior TT competition. Although DeRosier was fastest around the TT course for the first lap, he crashed in a later lap, but still managed to finish in 12th place. He received outside assistance to get underway again, but unfortunately that help led to his disqualification from the TT. 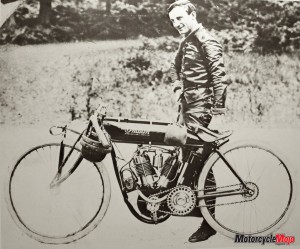 After that competition, however, DeRosier entered a best-of-three race against England’s Charles “Charlie” Collier of Matchless at the 2.77-mile concrete oval at the Brooklands venue. DeRosier won two of the three races, using his pace-bike drafting skills to follow Collier before quickly passing him just before the finish line. He further cemented his go-fast credentials, setting an 88.7 mph mile world record.
When DeRosier got back to North America, Indian fired him from the racing team (some say owing to his poor showing at the TT), but rival maker Excelsior quickly picked him up. Aboard the Chicago-built V-twin motorcycles, DeRosier showed some promising speed, but in March 1912, he suffered severe injuries to his left leg and thigh while racing at a new one-third-mile board track in Los Angeles.

Fight to the Last

Although DeRosier had crashed and recovered many times before, he’d run out of his seemingly endless supply of grit and determination. Three surgeries later, he never recovered from the last operation and died in Springfield, Massachusetts, almost exactly one year after the final crash – on February 25, 1913. Fittingly, given his importance to the early days of motorcycles and speed, DeRosier has been inducted into the American Motorcyclist Association Hall of Fame and, because of his Canadian connection, both the Canadian Motorcycle Hall of Fame and the Canadian Motorsport Hall of Fame.